This is the second of three blog posts on recent trends in national inequality.


The previous blog post in this series described the trend in the global and regional averages of national inequality for the period 1988-2013. Now we dig deeper into the trends in inequality at the country level. We describe changes in national inequality during two periods – around 1993 to 2008 and around 2008 to 2013. The long-run spells include all countries for which we have data on inequality around 1993 and 2008, and that data is computed using the same welfare measure (income or consumption). The short-run spells include countries for which we have inequality data around 2008 to 2013; this list is based on the World Bank’s Global Database of Shared Prosperity.

These long-run and short-run spells include 91 and 81 countries that represent 84 percent and 54 percent of the world population, respectively. We chose the long-run spell to begin around 1993 given the limited data availability in the developing world (especially in Africa) before that year. Comparisons need to be drawn carefully because the regional composition of the two sets of spells is different. For example, the set of short-run spells includes fewer countries, especially in South Asia and Sub-Saharan Africa, reflecting issues of data availability and comparability. On the other hand, the surveys included in the short-run spells satisfy a high degree of comparability.

Figure 1 plots the Gini index for the final year against that for the initial year of the long-run (panel a) and short-run (panel b) spells. Countries above the diagonal experienced increasing inequality, whereas countries below the line saw declining Gini (in other words, decreasing inequality). We see large drops in inequality between 1993 and 2008. This might indicate successful reductions in inequality, but also some problems with survey comparability, especially in Sub-Saharan Africa. The other major region with declining inequality is Latin America and the Caribbean. 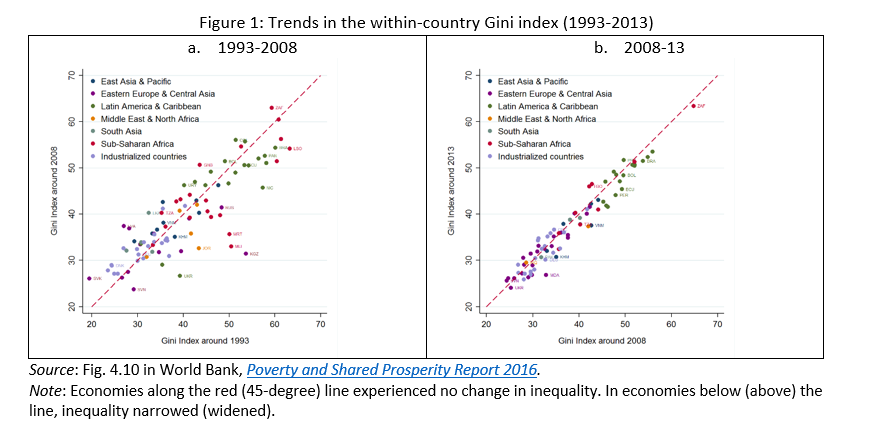 The changes between 2008 and 2013 (Figure 1b) were smaller for the (also smaller) sample of countries. The majority of countries appear to fall below the diagonal, that is, they show a declining Gini index, and the decline in Latin America and the Caribbean appears even more pronounced. The few country examples highlighted in Figure 1, panel b, indicate that decreases in inequality have been observed across all levels of inequality (high and low), income groups (low-, middle- and high-income categories), and regions.

Table 1 summarizes within-country trends in inequality by region more systematically. The sample of countries which have data around 1993 and 2008 includes 91 countries; among these countries the Gini index increased in 42 countries, declined in 39 countries, and did not show a significant change in 10 countries (that is, in these countries the change in Gini was within 1 point in either direction). Yet, the average Gini among these 91 countries actually declined by 0.8 Gini points, from 40.1 to 39.3. This is because the Gini index fell by a larger amount in countries where inequality declined than it increased in countries where inequality increased during this period. Inequality also widened more rapidly in some populous countries such as Bangladesh (5 points), China (7 points), and Indonesia (5 points).

Between 1993 and 2008, the Latin America and the Caribbean region stands out because of narrowing inequality: 58 percent of the countries in the region showed a decline in the Gini index, and the average Gini for the region declined by 2 points. Meanwhile, many East Asia and Pacific countries (56 percent) and South Asian countries (75 percent) in the sample saw rising inequality. The average Gini in East Asia and Pacific and in South Asia rose by 1.3 points and 3.5 points, respectively. In the industrialized countries, the average Gini increased in over half the countries. The Sub-Saharan African countries are roughly evenly split into increasing and decreasing inequality, with a decline on average. The conclusions for the Middle East and North Africa region need to be interpreted carefully because of limited data availability in the region.

The evidence suggests that there was a shift toward declining inequality in the period 2008 to 2013. However, we need to be cautious to interpret this fact because the global financial crisis occurred during this period. For every country in the sample showing an increase in the Gini index of more than one point during this period (19 out of 81 countries), there are more than two other countries showing a reduction in the Gini of at least the same magnitude (41 out of 81 countries). On average, the Gini fell marginally by 0.8 points during this period. Populous countries with falling Gini index include Brazil (−2.4 points), Pakistan (−1.2), and Vietnam (−5.1). This trend toward narrowing inequality can be observed in all regions.

There has thus been some good news on inequality trends in recent years, but over optimism is out of place. The period from 2008 to 2013 has been unique in many ways, and there should be no presumption that these favorable recent trends will continue. Furthermore, inequality remains unacceptably high in many countries around the world.

But what this evidence shows is that it is possible to reduce inequality. Beyond global processes, a country’s income inequality is to a large extent a choice, since we know that there are plenty of policies, programs, and actions that a country can take to fight it. Our latest flagship, Poverty and Shared Prosperity 2016: Taking on Inequality, examines a number of such policies, which we will discuss in a series of blogs. But before we do so, the next blog in this series will focus on the measurement issues that arise for within-country inequality, highlighting the need for better data.
Topics
Macroeconomics and Fiscal Management
Poverty
Regions
The World Region