Service delivery to the poor: A labor of love or just another job?

When the going gets tough, do the tough need higher pay?

Many public policies and nearly all international aid aim to improve the well-being of the poor.  Front-line service providers may not embrace this goal, however.  Is this mismatch important? Can it be corrected?  These questions are crucial for the success of public policies meant to equalize services to the poor and non-poor.  Recent evidence suggests that money helps – but how we select service providers matters, too.

Some beneficiaries are more difficult to serve.  From education and health to housing, their remoteness, complicated needs, communication difficulties or weak compliance make it harder to translate money and effort into better outcomes. The poor are more vulnerable to these characteristics, discouraging service providers from exerting effort on their behalf.  Simply equalizing the resources flowing to poor and non-poor beneficiaries may therefore be insufficient to eliminate inequity.  Indeed, some strategies to equalize resources may exacerbate inequity.

Service providers also differ.  Ideally, they are highly capable, engaged by the task of service delivery, pro-social and, especially, pro-poor.  Rarely does a single individual have all these characteristics.  Service delivery organizations address this challenge in part with careful selection procedures and compensation schemes that use pecuniary compensation to motivate workers when intrinsic motivation is scarce.  But are these strategies compatible, and do they work?

For example, researchers have shown that pro-social individuals work harder when they are matched to pro-social missions (Ashraf et al, 2014; Banuri and Keefer 2016; Carpenter and Gong 2016). However, when individuals are task-motivated, mission motivation may not matter (Banuri, de Walque and Keefer 2018).

New research now examines the interaction of pro-poorness and pecuniary compensation in service delivery.  Nearly 400 doctors, nurses and midwives in rural Burkina Faso participated in a “lab-in-the-field” experiment to illuminate these issues (Banuri, de Walque, Keefer and Robyn, 2018).  Do pecuniary incentives to serve the poor work?  Does their effectiveness depend on whether service providers are intrinsically motivated to serve the poor – whether they are “pro-poor?”  A lab-in-the-field experiment proved ideal to answer these questions, allowing carefully controlled variation in compensation and precise measures of pro-poor motivation that would have been difficult to achieve in a non-laboratory context.

The health workers reviewed video vignettes of medical cases involving poor and non-poor patients under a variety of bonus schemes.  They then answered questions about each vignette concerning diagnosis and treatment.  Mimicking real-world obstacles to serving the poor, the vignettes with the poor cases took longer to review and included extraneous information, raising the difficulty and effort needed to address them.  Figure 1 depicts a scene from one of the vignettes and an example of the questions that the health workers answered. 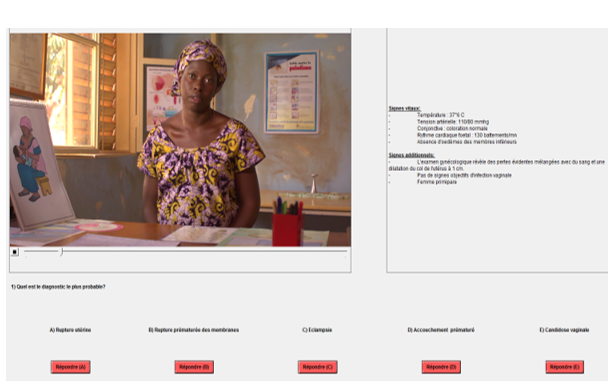 How can we distinguish which health workers are more pro-social or pro-poor? Each participant in the experiments received a sum of money equivalent to the price of a lunch in a student restaurant.  They were told that they could keep all the money or distribute as much as they liked between two schools.  They were shown pictures of a classroom in each school, as in Figure 2.  It was clear to the workers that one school was poorer than the other.  More pro-social health workers were those who contributed a larger fraction of their total endowment to both schools.  The more pro-poor workers were those who gave a larger share of their contribution to the poor school.

The health care workers were then randomly assigned to a series of different treatments.  In each, they chose whether to work on the shorter (non-poor) or longer (poor) vignettes.  Every question that they correctly answered yielded a donation to one of the schools.  When they worked on a short vignette, the non-poor school received a donation; correctly answered questions based on the longer vignettes triggered a contribution to the poor school.

The research yields lessons for recruitment.  On the one hand, the presence of pro-poor service providers can substitute for pecuniary bonuses to serve the poor.  On the other hand, pro-poor individuals recognize that pecuniary incentives might reduce the attention that they give to poor patients.  Pro-poor workers in Burkina Faso preferred the flat salary contract to an equal bonus contract that would have disincentivized their attention to the poor.

Public policies should focus on closing the gap between the poor and non-poor in health, education, and other outcomes related to public services.  However, evidence from Burkina Faso indicates that it would be a mistake to ignore differences in the effort needed to serve poor beneficiaries – and differences among service providers in their willingness to exert extra effort on behalf of the poor.