Too young to die: Age and death from COVID-19 around the globe

The risk of death from COVID-19 rises rapidly with age, and the disease is perceived by many people to be principally a danger for the elderly. But just how concentrated are the victims among older people around the world, including in developing countries? We took a detailed look at this question in a new working paper using data from 2020.

We employ two approaches. First, we use official COVID-19 death reports compiled by governments. The weakness to this data is that not all deaths due to COVID-19 infections have been attributed to the disease. It’s possible that the odds of attribution vary by age, which would distort age profiles of COVID-19 deaths. Perhaps, for example, in developing countries where many older people die outside of hospitals and without access to testing, their deaths during the pandemic are less likely to be recognized as being due to COVID-19.

We also used a second approach based on excess mortality estimates, which have been viewed as the “gold standard” for understanding pandemic deaths. These are calculated by comparing the count of recorded deaths (from all causes) to expected deaths, based on past year patterns. We highlight that it is important to take trends into account when estimating expected deaths. Many excess mortality calculations fail to do this and instead use a simple average of past year death counts. We show that doing so results in overestimates of excess mortality.

We also estimate age-mortality curves for every country using both official COVID-19 counts and our excess mortality estimates. We show that while mortality rates (deaths/population) rise with age everywhere, they rise less rapidly with age in middle-income countries. In other words, COVID-19 mortality rates are flatter and the risk is less highly concentrated among older people.

Why do these findings matter? The findings demonstrate that COVID-19 is not just a danger to older people in developing countries, where a large share of victims are people of working age. The findings are alarming: in middle-income countries, COVID-19 has killed many people who are caregivers and breadwinners, heightening fears that the pandemic will have long-term effects via diminished investments in children.  These results underline the desperate need to bridge the “great vaccine divide” that threatens global recovery. Poorer countries have been left behind in the race to vaccinate and solving the vaccination gaps, as the World Bank is working to do, must be a top priority. 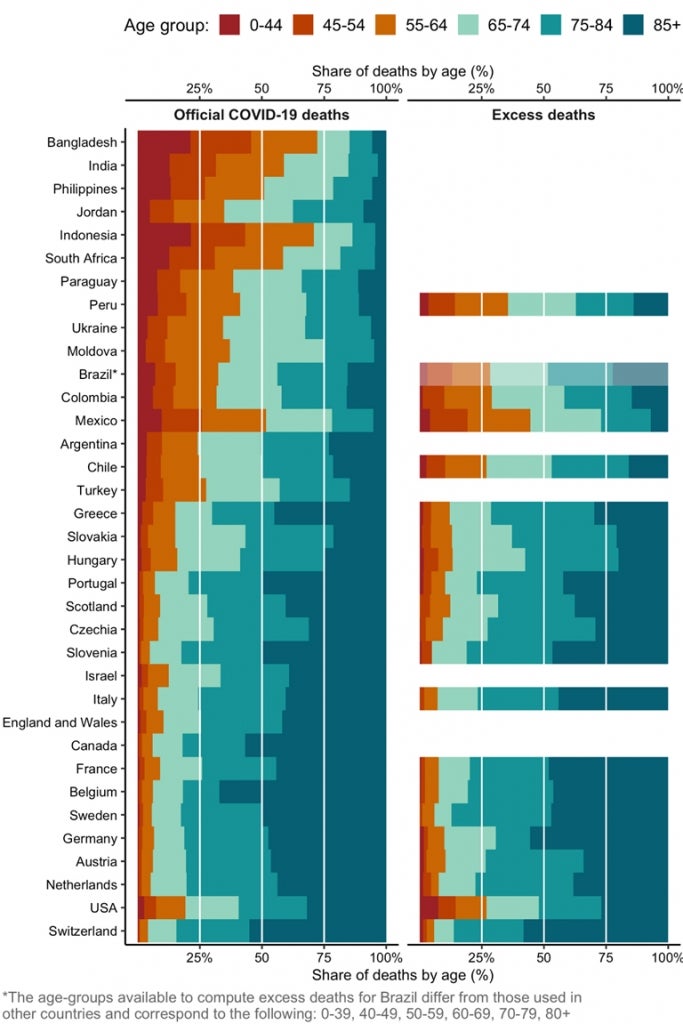 Notes: Countries with fewer than 2000 official COVID-19 deaths are excluded. Country-age group combinations with negative excess deaths are shown as zeroes. Countries are sorted by 2019 GNI per capita (PPP).