How do we achieve sustained growth? Through human capital, and East Asia and the Pacific proves it


In 1950, the average working-age person in the world had  almost three years of education, but in East Asia and Pacific (EAP), the  average person had less than half that amount. Around this time, countries in  the EAP  region put themselves on a path that focused on growth  driven by human capital. They made significant and steady investments in  schooling to close the educational attainment gap with the rest of the world. While  improving their school systems, they also put their human capital to work in  labor markets. As a result, economic growth has been stellar: for four decades  EAP has grown at roughly twice the pace of the global average. What is more, no  slowdown is in sight for rising prosperity.

High economic growth and strong human capital accumulation  are deeply intertwined. In a recent paper, Daron Acemoglu and David Autor explore  the way skills and labor markets interact: Human capital is the central  determinant of economic growth and is the main—and very likely the only—means  to achieve shared growth when technology is changing quickly and raising the  demand for skills. Skills promote productivity and growth, but if there are not  enough skilled workers, growth soon chokes off. If, by contrast, skills are abundant and  average skill-levels keep rising, technological change can drive productivity  and growth without stoking inequality.

East Asian leaders knew high-quality education was the best way to secure a growing number of good  jobs. So for more than six decades they provided education, expanding coverage  and improving quality.  They continue to  provide it in ways that are effective and innovative. Countries now  increasingly look to EAP to understand how to make their education systems  succeed. A new flagship report from the World Bank—to be released in Fall  2017—will distill key lessons for countries seeking to emulate this path.

One of the report’s main themes is the close connection  between education quality and successful sustained growth. Simply providing  more education is not enough; policy needs to pay great attention to student  learning. EAP countries met the challenge of closing that gap at a time when  global average years of schooling per person  were tripling. But it is not only  the quantity of schooling that matters.

If you don’t learn much in school, you won’t have many  skills to bring to your job. What makes East Asia’s achievement even more  remarkable is that in many countries the quality of the education provided in  this massive “catch-up period” appears to be as good as or better than what the  world’s advanced economies were providing. While we do not have measures going  back to the 1950’s, in 2015 East Asians students from China and Vietnam—two  countries that account for two-thirds of the world’s students--scored above the  OECD average in science on PISA, and had 50% more students in the top two  performance levels.

Their significant investments have paid off through growing  labor market opportunities. In general, an extra year of schooling raises an  individual’s earning by about 10%. During the second half of the 20th  century, hundreds of millions of people attained several billion additional person-years of  schooling,  and what they learned was, in general, applied productively at work. While a  great many people in EAP still lack access to high-quality, challenging jobs  that test their knowledge and skills, more and more workers have this type of  work. 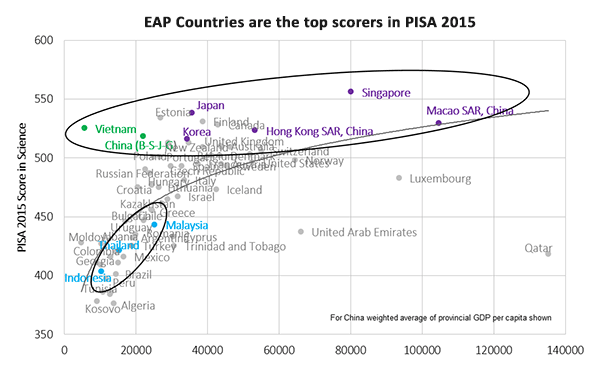 Many countries dream of being middle-class societies, where  most if not all people have the chance to acquire skills and earn a decent  living, and where gaps between the richest and the poorest are modest.   The developing countries of the EAP region  still have work to do to achieve this vision. But perhaps more than anywhere,  they have put themselves on the path by making massive strides to raise both  the quantity and quality of schooling.