How to provide clean water in rural areas: an example from Vietnam 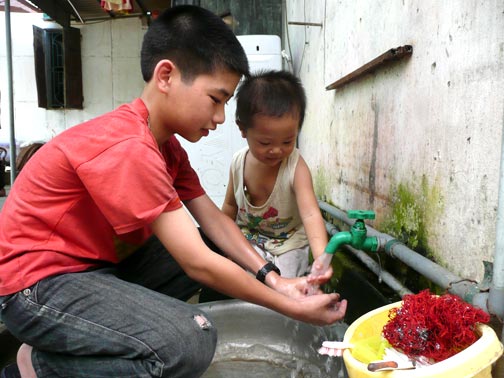 Two kids wash their hands with clean water. Their home in Thai Binh Province, Vietnam got access to clean water in 2011. Watch video: Providing clean water in rural areas: an example from Vietnam

Despite Vietnam’s significant economic growth in recent years, there continues to be a gap between urban and rural areas when it comes to access to clean water and hygienic sanitation facilities. Many poor households in rural areas still do not have access to clean water or to a toilet. During one of our earlier field visits for the Red River Delta Rural Water Supply and Sanitation (RRDRWASS) project which began almost 10 years ago, I was struck by what a lady from a community told me. She questioned why people in urban areas have access to good water supply and sanitation services while those in rural areas do not. She said that compared to urban residents, perhaps people in rural areas were happy with a lower level of service and that the demand for better services was simply not there.

At first I thought that she might be right but I later came to realise that this is not the case. There is demand for improved services in rural areas, and more importantly, people have a fundamental right to have access to those services.

So what are the reasons for the gap?

I believe one key issue is using the proper approach that’s suited to location. In urban areas, where population density is higher, the cost of providing water is typically lower than for rural areas. The higher costs in rural areas often lead to rural water schemes becoming unsustainable. In addition, the capacity to ensure the proper management and operation of water schemes is generally weaker in rural areas. We need to consider how to create the right environment to address these issues and extend sustainable water supply and sanitation services to rural areas that meet the needs of the people living there. Creating the ‘right environment’ has been an important part of the strategy of the project.

Where most water projects have traditionally focused exclusively on the construction of hardware for water schemes, the RRDRWASS project also recognized that educating and raising the awareness of the community on water and sanitation issues is vital to success.

The water supply schemes under the project have been established under innovative enterprises which have the capacity for proper management and operation. The community also has a 10 percent stake in these companies which has ensured a strong sense of community ownership and commitment, as well as deep community involvement in the planning, construction, operation and maintenance of the schemes. Involvement even extends to community members supervising construction contracts. This practice has ensured that the needs of the community and the quality of services required are met in a transparent and participatory way. Women in particular, who mostly collect water, have been closely involved in the project through the Women’s Union which lends money to households to pay for water connection.

Users have reported a high level of satisfaction with the quality of service provided by the water supply schemes in the four provinces of Nam Dinh, Thai Binh, Ninh Binh and Hai Duong. They have also demonstrated a willingness and ability to pay tariffs that allow the enterprises to cover the direct costs of providing water through the schemes, ensuring financial sustainability.

The project also focused on intensive activities to promote hygienic behaviours such as hand washing as well as developing a revolving fund for low-income families to build hygienic toilets for their houses. The fund, managed by the Women’s Union, has provided hygienic toilets in the four project provinces, covering 87 percent of all households. In addition, all loans availed of under the fund, have been repaid in full.

After the project completed in June 2013, it helped:

I’m so happy to have been involved in the project from the beginning until the end and to see the positive impacts on rural access to clean water supply and hygienic sanitation in the four provinces. In the future, I would very much like to see this approach replicated in other provinces in Vietnam.

I am so pleased to see that the lessons from this project are now being scaled up into a national program supported by a "Program for Results" (PforR) project. This is an innovative new approach to financing which links funds directly to results, ensuring that benefits will be delivered to those in need more efficiently. It’s the first PforR to be approved by the Bank in the East Asia and Pacific region and the first for the Bank in its rural water supply and sanitation sector.

Do you have any other ideas on how to get community participation in the rural water and sanitation projects? Share with us! Thank Hoa for your very interesting information and sharing. I also have some field trips to several rural areas in Viet Nam and also understand how important of accessing to clean water and environment sanitation for their daily life.

Before providing clean water,we need to raising people's awareness of sanitation and enthusiasm for improving the quality of water in the life.

Thank Qinghua Wu for your interest and fully agree with you that raising people's awareness is required and key principle of any project/program related to providing rural water supply and sanitation services.

This is a very nice action approach successfully water supply to rural areas. In named a Cambodian citizen, I really appreciated what you've done. This is also sharing some ideas to me for I am a developer study.

Dear Linda Leng,
Thank for your intererst reading this subject. This approach is now well received by Vietname Goverment and the GOV now trying to document lesson learn from this approach with aiming to scalling up nationally.

I have never been to Vietnam, therefore can't pass a judgment but my observation is that most of Asian and African cities don't provide clean drinking water to the people. I fear the rulers ignore the importance of drinking water. I think the bottled water is the safest.

Bottled water may be safe in the short term, but is not a sustainable answer to the problem, since bottled water has a host of environmental problems of its own.