Laos: How the Nam Theun 2 dam is managed during flood events It’s been an unusually severe rainy season in some parts of Lao PDR, with several typhoons passing over after making landfall in .  is also severely hit, with bracing itself for floods as I write this. Floods are a regular part of life in this part of the world, but they can nevertheless be devastating for people impacted by them:  people may lose their entire rice crop if flood waters don’t recede in time; remote communities may lose access to the outside world as parts of their only road are washed away; and public health problems can multiply water and sanitation facilities are overwhelmed.

A large hydropower project like Nam Theun 2 (NT2) has a significant effect on water flows around the project, and so inevitably people begin to question whether NT2 is somehow making the local floods worse.  Questions around project’s role in exacerbating natural floods started even before Nam Theun 2 started operating (see a blog post on this back in 2009), and it has sporadically been blamed during this wet season as well.  A lot of these arguments stem from some pretty basic misunderstandings of how NT2 works, so although this information is already in the public domain, I thought I’d produce a simple summary here with reference to the attached map. 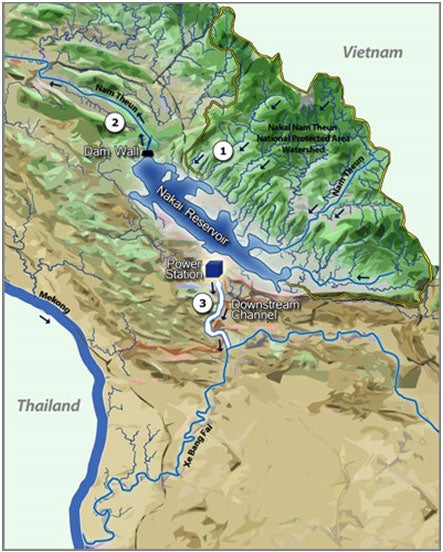 NT2 has a 4,000km2 watershed area (area 1 on map), made up of the Nakai Nam Theun National Protected Area, which borders . Rain falling in that area is collected in a series of rivers that start there (including the Nam Theun) and ends up in the Nakai Reservoir (the NT2 reservoir). It’s a big watershed, and when there is extreme rainfall, such as during a typhoon, thousands of cubic meters of water per second can flow into the reservoir. The reservoir is some 450km2 in size and can store around 3,500,000,000m3 of water when at full supply level.  Nevertheless, it is sometimes necessary to release water before, during and after times of extreme weather, so let’s talk about how that works.

The natural flow of the water from the NT2 watershed is down the Nam Theun, into the Nam Kading, and from there into the river.  During the ordinary operations of NT2 only a small environmental flow of 2 m3/s is released through a special valve in the dam wall and into the Nam Theun (point 2 on the map). This minimum flow happens 24 hours a day, seven days a week, and is designed to keep the Nam Theun flowing until it is joined by additional tributaries a few kilometers downstream.

Most of the water release from the NT2 Reservoir happens at the other end of the reservoir and flows through an underground tunnel to the power station, and into a different river basin (hence NT2 often being called an “inter-river basin transfer project”).

If NT2 is operating at full power production, around 330m3 of water will be released from the power station (the natural flow ranges from around 10 to 2000m3 depending on the season) and into the regulating pond, from where it will flow through 27km of project built downstream infrastructure before being released into the Xe Bang Fai (point 3 on the map).  As the name suggests, the regulating pond is designed to regulate how much of the power station’s release is allowed to flow on towards the Xe Bang Fai at any time. NT2’s downstream program is designed to mitigate and compensate for the impacts on communities caused by this change in flow.

So that’s ordinary operations. What happens during extreme weather?

Xe Bang Fai: There are around 150 villages along or close to the Xe Bang Fai that have been regularly impacted by the Xe Bang Fai flooding over the years. To avoid NT2 exacerbating the floods, the Nam Theun Power Company (NTPC) has a contractual obligation to cease power production when pre-defined flood risk levels are reached in the Xe Bang Fai.

The NT2 power purchase agreement with the Electricity Generating Authority of Thailand (EGAT) recognizes this obligation, and there are no penalties for NTPC ceasing operation under these circumstances. During 2011, NTPC ceased generation in early July and again on August 2nd and didn’t restart for almost a month following particularly extreme weather in Khammouane, the province where NT2 is based.  Water releases for the sake of NT2 reservoir dam safety are not made via the Xe Bang Fai, not only for the contractual reasons above, but also because the total amount of the water that can be released this way is around 330m3 – small compared to the volumes flowing into the NT2 Reservoir during extreme weather.

Nam Theun: If it becomes necessary to release water to avoid the dam overflowing, this is done via five gates at the dam wall, which release water into the Nam Theun. When required, releases are started in advance of extreme weather to ensure space in the reservoir, allowing the NT2 reservoir to reduce the impact of extreme weather on communities downstream of Nam Theun. It is important to remember that while NT2 may be releasing water into the Nam Theun during a flood, the same water would be flowing down the same river if the NT2 Reservoir wasn’t there. In fact, NT2 will reduce the impact of a flood by releasing water more slowly than it is flowing into the reservoir, thus helping to smooth the impact of natural events. This is what happened during a storm in early October.  Prior to any significant releases of water, NTPC follows a pre-defined communications protocol that alerts government that water releases will be made.

Finally, besides the benefit of potentially smoothing the downstream impact of any extreme weather events, the NT2 downstream program also assists local communities along the Xe Bang Fai with livelihood programs. The livelihood programs, through the expertise of International Rice Research Institute (IRRI) and working with the Ministry of Agriculture and Forestry, include support for community adoption of submergent rice varieties that can survive flood periods of up to 14 days as well as late season rice varieties that can be planted after the worst of the rainy season has already passed.

NT2 can assist in reducing impacts of flooding in local areas by slowing the flow of water released into the Nam Theun and helping interested communities around the Xe Bang Fai adopt submergent tolerant and late-season rice varieties that reduce the impact on food security of natural floods. Thanks for this excellent piece of information.
I would really find it helpful if you could post a rating curve showing inflow vs outflow to demonstrate the regulation effect of the dam(s).

During flood people need to be calm and dont panic. There must be quick action must be taken so that the people can be safe and secure.
alliteration definition