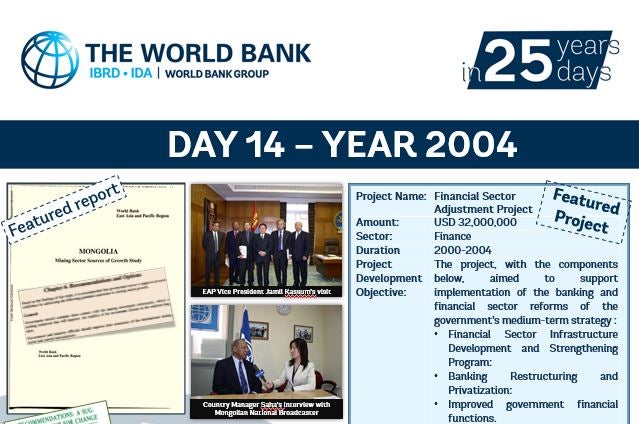 Continuing our series of blogs looking at the 25 year partnership between Mongolia and the World Bank, today we examine 2004, the year Mongolia’s growth rate accelerated to 10.4%.  After 15 years, real GDP per capita had finally passed the level of 1989. The country was in the midst of a mining boom, and that sector took center stage in 2004.

Mongolia Mining Sector: Managing the Future assessed the “medium-term growth potential of Mongolia's non-fuel minerals industry, and its potential contribution to economic growth, poverty reduction, and regional development.”  The study, based on field work undertaken in 2003, took a broad approach, examining potential constraints and investor perceptions, and then recommended options to improve industry management and the investment climate. Recommendations urged mining companies to support social programs that benefit the surrounding communities, and the government to establish and maintain adequate infrastructure to meet the mining sector’s growth. “The government should address the challenges associated with mining for growth, namely, preventing the development of unsustainable fiscal policy and mounting debt; avoiding rent-seeking behavior, and, overcoming absorptive capacity constraints and adverse impacts on non-mineral exports.”

The pressures on the capital city were also becoming stronger following rural-urban migration that followed back-to-back dzuds.  The Second Ulaanbaatar Services Improvement Project (USIP2), which was approved in 2004 and took effect the next year, aimed to address some of the problems of the expanding peri-urban ger areas.  The project sought to provide improved water supply to the urban poor in a sustainable manner. Prior to the project, residents in ger areas “ had to travel as much as 350 meters to reach a public water kiosk where they could purchase water.” The water quality at the kiosks, which were supplied by water trucks, was lower than that of piped water in other parts of the city, and the water kiosks often ran out of water due to limited capacity of the tanks. The project improved the situation by connecting water kiosks with the main distribution network so that kiosks would not need to be truck-fed. The project also replaced old pipes and equipment in the city center to reduce leakage and improve energy efficiency, and installed equipment for monitoring water quality. The USIP2 achieved its primary objective of improving the quality of life of the urban poor, yet was unsuccessful at another objective, that of improving the financial sustainability of the city water utility. Water and wastewater tariffs of apartment users were set extremely low—without explicit subsidies the company’s financial health remained weak.

In 2004, the World Bank/IDA also adopted a new four year Country Assistance Strategy aimed at “ensuring macroeconomic stability and public sector effectiveness, supporting production and exports, and improving the environment for private-sector-led development; enhancing regional, rural development, and environmentally sustainable development; promoting good governance, and implementing and monitoring the strategy.” Recognizing that the legal framework for a market economy was largely in place, the CAS noted that “the focus now is on building capacities for implementation and enforcement.”

Next we look at 2005, when the environment and natural resources agenda became broader and deeper.