Waste Not, Want Not : “Waste Banks” in Indonesia 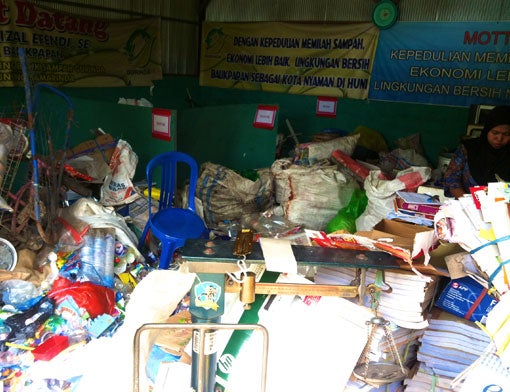 When you’ve grown so used to tossing all manner of garbage into the trash bin, without giving a second thought to whether it is organic or non-organic waste, it’s easy to not care where your garbage ultimately ends up. But the reality is that, in Indonesia, your garbage gets mixed together with the garbage of millions of households, creating mountains of toxic waste too large to contain in municipal landfills.

As experts in the field would vehemently argue, solid waste management is not the sole responsibility of a municipal government, but a collective one. As populations grow and consumption patterns increase, more and more solid waste is created– and landfills can only take so much waste!

So what to do? The World Bank in Indonesia is currently exploring how to improve solid waste management, and scaling up ‘waste banks’ is one option.  Recently I went on mission with the Solid Waste team to see these waste banks at work.

What is a ‘waste bank’?  Waste banks – or “bank sampah” as they are called in Indonesian – can be found in neighborhoods across Indonesia – on Sulawesi, Kalimantan, Java.   At waste banks, the waste created by the household is divided into two categories – organic and non-organic. Organic waste gets turned into compost, while non-organic waste is divided further into three categories: plastic, paper, plus bottles and metal.

The vast majority of eco-friendly households in Indonesia keep three bins or three large garbage bags in their homes; over time they began separating their waste into three different sections. Once their three bins and garbage bags are filled up, they bring their haul to a neighborhood waste bank where they then “make a deposit”.

Like a regular commercial bank, you open up an account with your local waste bank. Periodically, you make deposits with your non-organic solid waste, which are weighed and given a monetary value, based on rates set by waste collectors. This value is saved in your account from which, like a regular bank, you can withdraw. The basic principles of waste banks remain the same across provinces: collect, save, earn, change behavior, and enjoy a clean neighborhood.

In Manado, North Sulawesi, a local high school adopted the lessons of cleanliness and prudent waste management early on. Students of senior secondary high school SMA 7 began going green in 2007, by composting with organic waste from their cafeteria. Over time, a waste bank system was introduced, and students felt encouraged to “save up” their plastic water bottles and plastic snack wrappers, knowing that after a certain length of time they’ll have enough money to help supplement their school fees or other needs. Indonesia’s Ministry of Environmental Affairs has since awarded them for their ‘green’ entrepreneurial spirit. 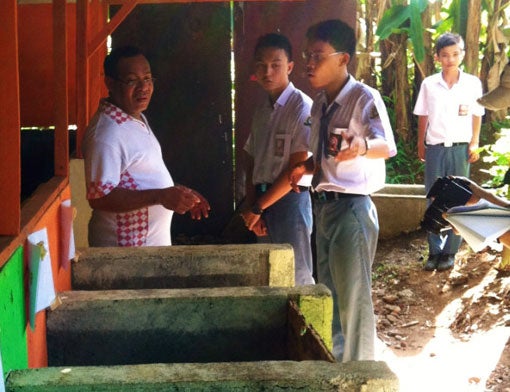 East Kalimantan’s capital Balikpapan runs a more conventional waste bank.
“’Garbage is our friend. Garbage equals money.’ That’s what I keep telling local residents,” says Sobirin, a former local legislator.  After opening in 2012, Sobirin’s waste bank in Gunung Samarinda  collects over 2-3 tons of non-organic solid waste each month.  “Each household manages to save about 50,000 rupiah (about $5) a month through this waste bank. Over time, this is quite helpful for helping pay for household and education needs.”

Sobirin has a team of good Samaritans volunteering at the waste bank’s main facility, and more volunteers are spread across 29 waste collection points. Volunteer Ibu Mimin has given her waste collection point its own twist. She runs a small shop selling basic household items like rice, coffee and detergent, and neighbors can trade in their solid waste for these basic items, in lieu of cash.

“Every week I remind other housewives in the neighborhood that they can exchange their solid waste for goods, based on the weight of the waste they deposit,” says Ibu Mimin.

Elsewhere in Sukunan, a quiet village in Yogyakarta, Central Java, Iswanto, a local solid waste management expert introduced “shodaqoh” waste banking. “Shodaqoh” refers to the Islamic concept of giving back to the community. Some 230 of 300 families in the village are involved in this community-driven model, gathering 2 tons worth of non-organic solid waste a month. The proceeds gained from selling community waste to waste-collectors are then used for communal purposes, such as a playground, decided by the community itself.

Stroll through their neighborhood, and witness the absence of litter or the stench of burning garbage.  Iswanto proudly says: “Locals here now know better than to burn their garbage – their own neighbors would shame them for it if they did.”

Waste banks are not unique to Indonesia.  We in Indonesia would love to hear how Indonesia can learn from the experience of waste banks elsewhere. hi....
we are from PT. Raja Ampat Nusantara.
Today, we are on development on creating and developing waste bank at Klaten-Central Java - Indonesia.
Sone waste bank here in indonesia are stagnant on process.
we did study (on waste bank) and starting to creating waste bank with few modified concept and achievement.
we do put link to this blog on our site www.raja4nusantara.co.id
we do wish that we can walking into cooperation further to help society and environment in Indonesia for start.
Regards, Joseph

Hi Randy enjoyed your article, I wonder if in it is possible myself and my wife could meet with you to chat more about your article and knowledge and ideas on waste management in Indonesia, as we have plans to develop a waste management business here in Jakarta. We have some good ideas and plans but we are not sombong enough to think we know it all , so we are meeting informed people like your self to understand the problems better and see what solutions present or not yet present can work to help the waste management issues whilst educating the local populace. Here is an email you can contact me on, [email protected] and I do hope to hear from you soon
Best Regards
Frank