Myths and Misperceptions: Reframing the narrative around women and girls in STEM

There are many prevailing beliefs about the participation of women and girls in Science, Technology, Engineering, and Mathematics (STEM) studies and careers. The assumptions go something like this: there are no women working in STEM; women and girls are not as good as men and boys at science or math; and only men are interested in these fields.

But how much stock should be placed in these stubborn myths and misperceptions? Not so much it turns out, according to a new study released by the World Bank.

The Equality Equation: Advancing the Participation of Women and Girls in STEM digs deep into the data and evidence to better understand the drivers as well as offer potential solutions for bringing about gender equality in STEM. What we found was that many of the myths and misperceptions that surround women and girls’ participation in STEM don’t quite hold up under scrutiny and may instead serve to perpetuate gender gaps.

Myth #1: There are no women working in STEM

These trends also differ across regions. For instance, research careers, which have been used as a proxy indicator of STEM career gaps, show that countries in Europe and Central Asia have much higher rates of women in STEM (more than 50 percent of researchers in Bulgaria, Latvia, and Lithuania are women). The share of female researchers in Latin America and the Caribbean is also relatively high at an average of almost 40 percent.

Much more can be done to highlight the women who work in these fields. This matters because female role models are especially effective in increasing girls’ STEM aspirations and building their self-efficacy. We also need to be careful about reinforcing the idea that are no women in STEM, which could further discourage young girls from considering this career path.

Myth #2: Men are better than women at STEM

It may be pervasive, but the misperception that men are somehow better than women at STEM fields is not borne out by the evidence. Available test data from Program for International Student Assessment (PISA) and the Trends in International Mathematics and Science Study (TIMSS) show that girls often score as well as or better than boys in science and mathematics (figure 1). Gaps between boys and girls in the last four decades have closed as a result of both improvements in mean scores of girls and a decline in the scores of boys, especially at the upper end of the distribution.

Figure 1: Girls do as well or better than boys on science and math tests 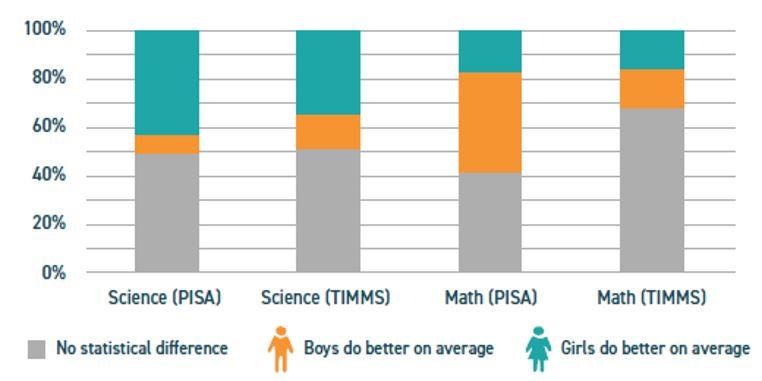 The concept of interest is messy. Interest can change across points in time and differ across STEM subjects and contexts.

For instance, a longitudinal US study finds that girls and boys have similar levels of interest for science; however, there were much larger gaps in engineering, with 58 percent of boys reporting an interest versus 13 percent of girls.

Importantly, exposure to STEM at an early age can influence girls’ interest in STEM. Yet, pervasive bias —and the myths that accompany it—can play a role in steering them away from STEM careers.

Girls who expressed a strong interest in science and engineering careers developed an early interest in engineering by third grade. They had also participated in extracurricular science activities, like science club or summer programs before grade seven.

More to the point, though, is that interest and aspirations are not innate or immutable. There is also a large and growing body of evidence that points to how stereotypes and biases influence interest (as well as other psychosocial factors, like confidence and aspirations).

And there is a lot of gender bias in STEM.

Figure 2: Parents have a greater expectation that sons will take up STEM careers 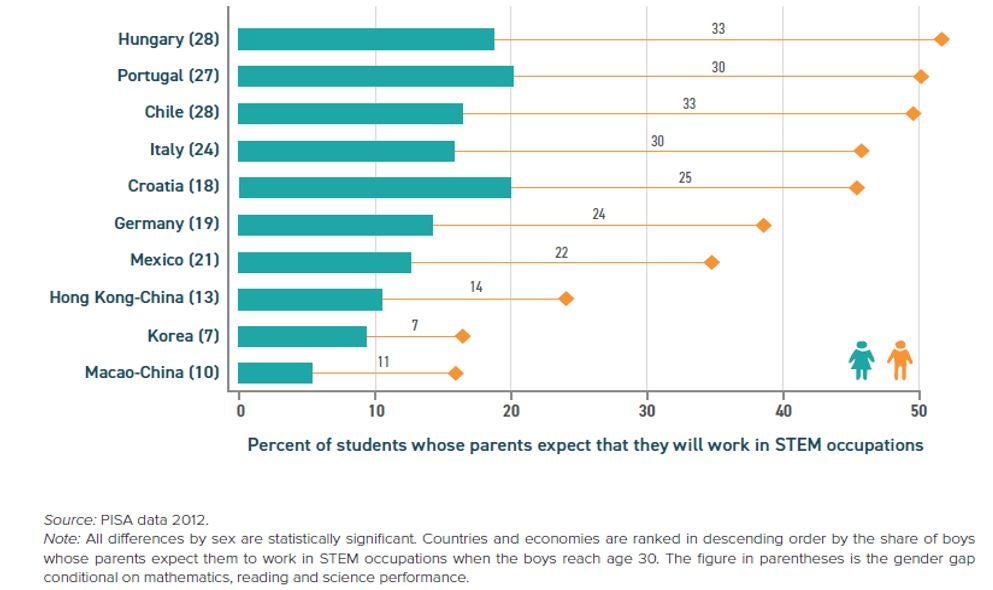 Figure 3: STEM jobs are associated with more discrimination to the disadvantage of women 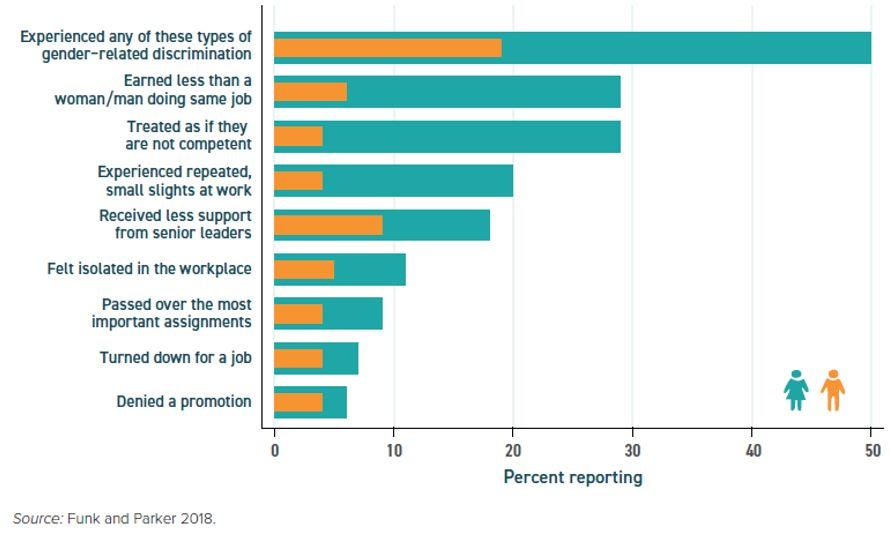 The myths being perpetuated about women and girls in STEM matter because children as young as six years old start to show they have internalized stereotypes. For example, girls are less likely than boys to associate “brilliance” with their sex. Since there is a belief that being good at science and math is related to “brilliance,” it is plausible that these perceptions influence interest in STEM fields at later stages of life.

It is difficult to disentangle the extent to which these gender stereotypes and biases (which govern gender roles and norms) influence someone’s innate interest or preference as well as their aspirations.

But the evidence shows that engaging girls early—at the primary level or even before—in STEM, especially through active learning and extracurricular activities, can build interest in these fields. During high school, activities, such as museum visits, competitions, clubs, and robotics and coding camps, help to influence the science identity of girls, foster positive attitudes, and inspire greater confidence in these fields.

So, instead of perpetuating myths about why STEM isn’t for women, we should be telling girls that they too can have a career in STEM.