How many schools are connected to the Internet?

As we near the halfway point of the second decade of the 21st century, it is difficult not to marvel at all of the new technologies that have insinuated their way into daily lives of increasing numbers of people around the world. An upcoming publication from the World Bank, the World Development Report for 2016, will explore the Internet's "impact on economic growth, on social and economic opportunity, and on the efficiency of public service delivery". The EduTech blog regularly features and comments on specific projects and research about how the Internet (as well as related technologies, technology platforms and technology-enabled approaches) is being utilized to benefit education in developing countries around the world (as well as some instances where it is having no benefit at all).

As insightful as lessons from efforts like those related to using mobile phones to promote literacy in Papua New Guinea or providing all students with their own laptops in Uruguay might be, however, it is worthwhile to take a step (or two, or twenty) back in an attempt to see the outlines of the big(ger) picture. While it is true that groups around the world continue to implement innovative solutions to simulate Internet connectivity in places where it still doesn't exist in schools (through the caching of content on local servers or portable drives, for example), this is almost always a stop-gap measure until something better comes along, namely: reliable, robust, fast, inexpensive connections to the Internet.

On-the-ground, practical experiences with introducing and using new digital technologies in education systems around the world over the past two decades have led many to conclude that a 'second digital divide' has emerged, separating those with the skills and competencies to benefit from the use of these new technologies from those who are not benefitting, or not benefitting to the same extent. There can be little doubt that such a second divide exists, and that this divide, which is focused on the impact of technology use, may well be more difficult to bridge than the original 'digital divide', which related primarily to access to technology. While in the end we are rightly concerned with outcomes, and impacts, inputs still matter. With this in mind, and with full acknowledgement that connectivity is not an end in itself, but rather a means to a larger end, it might be worth asking:

How many schools around the world are connected to the Internet?

Until recently we had little hard (or even soft) data to help us answer what would appear, on its face, to be a rather simple question. Things are improving in this regard, however. As it stands today, your best source of insight in this regard is probably a document with the delightfully bureaucratic title, Final WSIS Targets Review: Achievements, Challenges and the Way Forward, that you may have missed when it appeared last June. In case it may be of interest (a former boss of mine used to say: We pay you to read this stuff so that we don't have to!), I thought I'd take a quick look at it here.

First some quick background: Thirteen years ago the United Nations endorsed the holding of a World Summit on the Information Society ("WSIS") to explore what it might take for all countries and their citizens to participate in, and benefit from, the so-called 'digital revolution'. As a result, two such global meetings were held (one in Geneva in 2002, the other three years later in Tunis) and a process was put in place to help monitor a set of ten related general 'targets'. Progress against the second of these targets, which was eventually articulated as "Connect all secondary schools and primary schools with ICTs", has been measured in a few different ways, one of which relates to the "proportion of schools with Internet access, by type of access (broadband, narrowband)". (Officially, this is known as indicator 2.4, for those of you who are interested in such things.)

With that background out of the way, back to the question:

How many schools around the world are connected to the Internet?

The general answer, according to the report from the Partnership on Measuring ICT for Development and the International Telecommunication Union, is that, when it comes to schools, "while Internet access has been universally achieved in the majority of European and other OCED countries, Internet connectivity is lagging behind in most developing countries. It remains under 10 per cent in some countries from all developing regions, including Latin America and the Caribbean, Asia and Africa.... Analysis has shown that while countries may have some success in building a computer infrastructure, connecting these devices to the Internet may lag behind."

In other words, a quick answer to this question might be:

More than before, but still not enough --
and those that *are* connected need better connections.

For those of you who find such an answer to be useful and interesting but rather unfulfilling (where are the numbers? the graphs?), the next section of this blog post is for you. 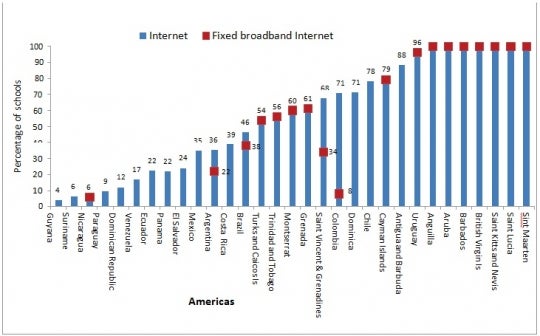 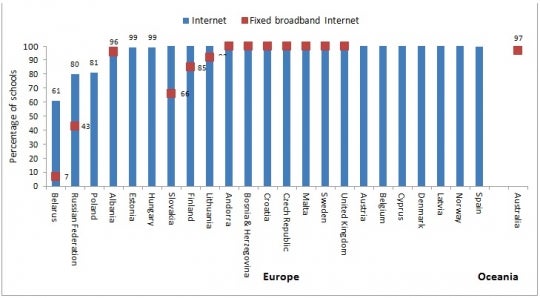 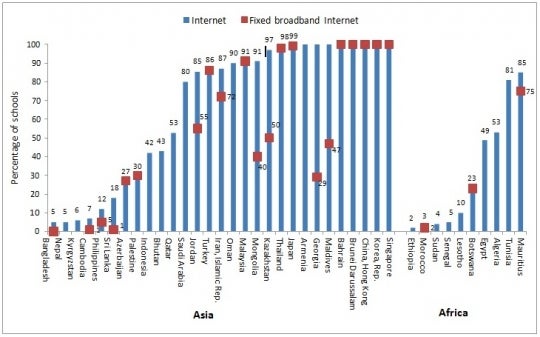 Sharp-eyed readers will note that these data are presented as percentages on a national level, and not in absolute numbers. Perhaps some enterprising student with time on her hands can convert these percentages into hard numbers by country, and then total up the figures to arrive at one number. One quick way to check the validity of this number would be to compare it to the total number of schools in the world ... although unfortunately there is no generally agreed-upon number of total schools in the world either. (This seems the sort of question that might feature in a case interview for a job at a management consulting firm. Perhaps this figure is buried within one of the Education For All Global Monitoring Reports?)

These data on school connectivity come from regional data collection initiatives led by the UNESCO Institute for Statistics (UIS) and done by various partners (past EduTech blog posts have looked at results from these sorts of efforts in the Arab States, Asia, Europe and Latin America). The UIS, which authored the section of the WSIS Targets Review that addresses school connectivity, is careful to note that, "The indicator measures the overall level of access to Internet in schools, not the intensity of use nor the actual amount of time that learners spend on the Internet for educational purposes." Indeed, just because a school is 'connected', this does mean that this connectivity is utilized, let alone utilized well, or used widely, or is sufficient. And: Even if all of these conditions are met, it may be the case that connectivity outside of school is as important, or even more important, for learning as what is available for students within schools. That said, however it is measured or judged, and whether or not you believe that, going forward, connectivity will provide the dial tone for education (or development), it is hard to argue that the absence of connectivity in schools is a good thing.

The report concludes by offering some related policy recommendations. I present them here, in a slightly different order (and offer some short related italicized comments in parentheses):


While better (faster / cheaper / more reliable) connectivity is certainly no 'magic bullet', more data about the extent to which schools are (and aren't) connected to the Internet does help outline the horizon of what might be possible. Some follow-on EduTech blog posts will try to unpack a few of the challenges associated with trying to measure access to, and use of, ICTs for teaching and learning around the world.


You may also be interested in the following posts from the EduTech blog:


Note: The vintage image used at the topc of this blog post of a man connecting telegraph wires ("ALPAL-2? EASSy? SAm-1? WACS?") comes from Wikimedia Commons and is in the public domain. (The acronymic references in the caption are all major submarine cables.) The graphs used are all © 2014 ITU and come from the publication reviewed here, Final WSIS Targets Review: Achievements, Challenges and the Way Forward, produced by the Partnership on Measuring ICT for Development (in which the World Bank participates) from data gathered by the UNESCO Institute for Statistics.