Joining Forces to Overcome Violence Against Women in South Asia 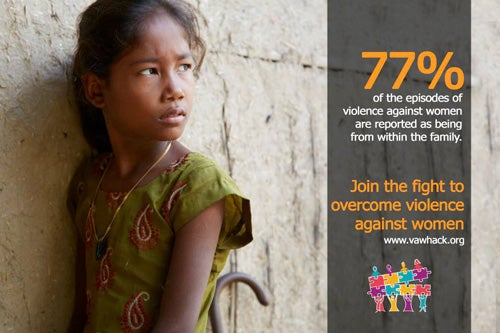 Violence against women is a pervasive problem worldwide, causing the deaths of more women between the ages of 19 and 44 than wars, cancer, or car accidents. In South Asia, gender violence is widespread and persists in many forms, as the statistics below demonstrate:
We cannot allow this to continue.

The gravity of violence against women in South Asia surged to global public attention in December 2012 following the horrific gang rape and subsequent death of a 23-year-old New Delhi student. The case sparked a movement called “1 Billion Rising," with rallies and events in India and throughout the world. Earlier in 2012, the shooting in Pakistan of Malala Yousafzai, a teenage advocate for girls’ education, also spurred public outcry worldwide. For me, these tragic events created a renewed sense of purpose and greater urgency to tackle this critical human rights and development issue in South Asia.

In the spring, we asked young people from across the region to share their ideas through mail, SMS, and email on what it will take to end gender based violence in their countries. We received over 1200 entries, including innovative ideas and impressive responses from both young women and young men. We subsequently held a panel discussion titled “Breaking the Silence,” with experts speaking out and sharing their experience and expertise on practical and policy approaches to addressing the issue of gender violence.

We realize that engaging youth and tapping into their passion and creativity is critical for breaking out of the cycle of gender violence. Young people have the greatest potential to change their society and the future. With this in mind, we are hosting a Hackathon in Nepal on June 16th aimed at finding technological solutions to address violence against women. We encourage you to sign up for the hackathon through this link.

On June 17-18, in partnership with Oxfam International, the World Bank will convene policy makers, practitioners, researchers and opinion makers from across South Asia to discuss how to overcome violence against women in the region. We understand that no single actor is equipped to address this complex, multi-faceted and intractable problem. In light of this, the conference aims to bring together a diverse group of individuals and organizations and in doing so, heighten our response to gender violence in South Asia. Follow us on Facebook and Twitter over the next week for continuous updates and highlights as the conference and hackathon unfold.

We understand that the complexity, interconnectivity, scale and gravity of violence against women in South Asia and across the world will require efforts at all levels. So talk to us through your comments, share your ideas, and ask questions.

Together we can overcome gender violence. Have to create awareness in every sector of the society and make sure .. All remember they realize that a woman make it possible for them to see the beautiful world around them ... Women are mother, sister, wife, beloved and daughter of someone ...somewhere..

We are working in Bangladesh. We are ethically working violence against women in our community. If you advice us what can we do and how to way face and meetup this problem.

Asian women are more suffereing from violence than as compared to other continents. This is a very hot topic to discuss about to which I feel very honoured to be part of it. I will be looking forward for any of the participation or volunteering.

Education is awareness. Communication needs to be tailored to both sexes to educate and prevent violence against women.

For international standards, good practices in prevention and protectio and minimum services to support victims of violence visit the website: www.coe.int/conventionviolence. The Istanbul Convention is becoming standard reference for action to prevent violence aganist women and domestic violence.

Various kinds of violence against women domestic violence
Violence against women in the family occurs in developed and developing countries alike. It has long been considered a private matter by bystanders including neighbors, the community and government. But such private matters have a tendency to become public tragedies.
In the United States, a woman is beaten every 18 minutes. Indeed, domestic violence is the leading cause of injury among women of reproductive age in the United States. Between 22 and 35 per cent of women who visit emergency rooms are there for that reason.
There is no excuse for such a behavior, message to all those who violate Islamic teachings and defy laws of the land with their inhuman treatment of women could not be tolerated.
As observed that many Governments now recognize the importance of protecting victims of domestic abuse and taking action to punish perpetrators. The establishment of structures allowing officials to deal with cases of domestic violence and its consequences is a significant step towards the elimination of violence against women in the family.
It’s an importance of adopting legislation that provides for prosecution of the offender. It also stresses the importance of specialized training for law enforcement authorities as well as medical and legal professionals, and of the establishment of community support services for victims, including access to information and shelters.
These examples illustrate some steps taken at the national level towards the eradication of violence against women. Combating and eradicating this scourge require enhanced and concerted efforts to protect women at the local, national and international levels.
States have tended to adopt a passive attitude when confronted by cases of violations of women's rights by private actors. Most laws fail to protect victims or to punish perpetrators. Passing laws to criminalize violence against women is an important way to redefine the limits of acceptable behavior.
States should ensure that national legislation, once adopted, does not go unenforced. State responsibility is clearly underlined in article 4 of the Declaration on the Elimination of Violence against Women, which stipulates that States should exercise due diligence to prevent, investigate and, in accordance with national legislation, punish acts of violence against women, whether those acts are perpetrated by the State or by private persons.
Any approach designed to combat violence must be twofold, addressing the root causes of the problem and treating its manifestations. Society at large, including judges and police officers, must be educated to change the social attitudes and beliefs that encourage male violence.

Educate Women first, Empower them economically. Then Connect them with the success stories of Ladies as Anuradha Koirala from Nepal. Make Males aware about female right and create a situation in which male respects females. It is one of the best way to reduce violence.

Among suffering from the violence against women is related to the countinents; it's of course Asia. To be more concerned about the violence against women Nepal will lead the topic although we can not lead in development. In Nepal especially in Terai region with people belongings to communities of dum, chamar, mushar (dalit) are suffering from physical and mental violence from their own either father-in-laws and husbands and other relatives altogether.I have many ideas to lead ahead but not the support altogether.

Time to take a stand.

have to create the awareness in every sector of the society. We should understand that the complexity, interconnectivity, scale and gravity of violence againstasian women.

Need to give education to the girls those who are not getting proper education due to the poverty so that they can form a resistance force in the worldwide.The process should be going on until the violence upon woman is stopped. Gathering should be arranged through a WEB site as & when necessity.

It's not about only giving education to the girls it's about the violence against the women so it better requires all the male dominated society to be made literate. Not education can only make people sophisticated;it depends upon the way of education provided to them. I have been searching organization that supports violence against women but not found yet in Terai Zone of Nepal where the sufferers are more.