We often think of amenities such as quality streets, squares, waterfronts, public buildings, and other well-designed public spaces as luxury amenities for affluent communities. However, research increasingly suggests that they are even more critical to well-being of the poor and the development of their communities, who often do not have spacious homes and gardens to retreat to. 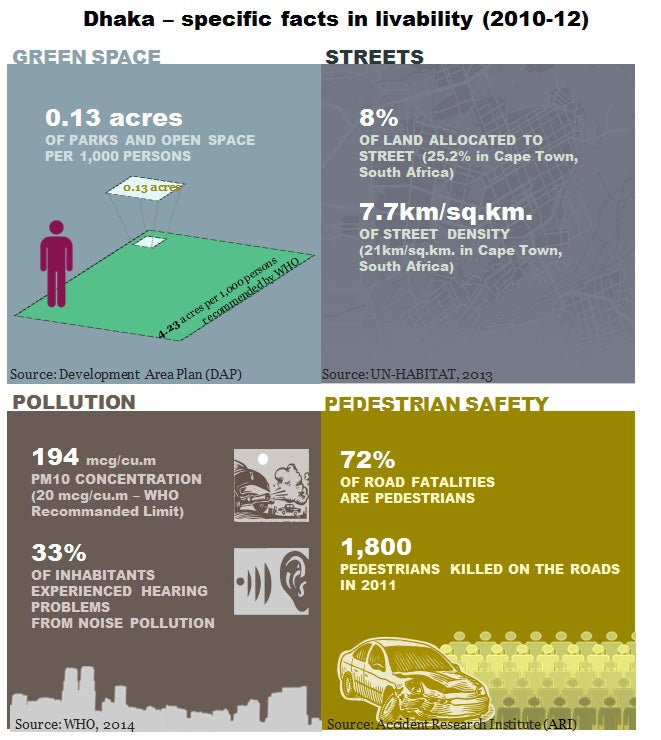 Living in a confined room without adequate space and sunlight increases the likelihood of health problems, restricts interaction and other productive activities. Public spaces are the living rooms, gardens and corridors of urban areas. They serve to extend small living spaces and providing areas for social interaction and economic activities, which improves the development and desirability of a community. This increases productivity and attracts human capital while providing an improved quality of life as highlighted in the upcoming Urbanization in South Asia report.

Despite their importance, public spaces are often poorly integrated or neglected in planning and urban development. However, more and more research suggests that investing in them can create prosperous, livable, and equitable cities in developing countries. UN-Habitat has studied the contribution of streets as public spaces on the prosperity of cities, which finds a correlation between expansive street grids and prosperity as well as developing a public space toolkit.

The lack of provisions for public spaces hampers economic activities, pollutes the environment, and reduces social stability and security. Inexorable’urbanization and population growth further exacerbates this situation as growing pains in cities like Dhaka illustrate. Public spaces should be considered a basic service, with the same priority as transport, water and sanitation which communities often primarily focus their resources on.
Public Space as an Instrument of Urban Transformation
We have seen an increase in demand from client cities to enhance urban spaces as a part of their urban projects. Some of these requests have been included as a part of several operations across South Asian countries, and incorporated in recent World Bank projects in cities including Colombo, Kandy and Galle in Sri Lanka as well as Chennai in India. Fortunately, there are notable examples of success from South Asia and beyond. The World Bank-assisted project of the Lahore Walled City restored centuries-old streets and homes within the historic Walled City while improving infrastructure and streets. Families now enjoy a better quality of life, businesses generate increased profits, and the community has a greater sense of participation in improving their lives. Another project under preparation for riverfronts along the Ganga in India will see their revitalization into vibrant public spaces, to improve local economic and cultural development. In Sri Lanka, the Strategic Cities Development Project seeks to make Kandy and Galle more pedestrian-oriented through public spaces after decades of car-oriented planning.

There are many sound examples outside of South Asia that the region can learn from. In Medellin, Colombia, the city has successfully upgraded the urban environment of poor communities through the creating public spaces and promoting connectivity through the innovative use of cable cars to provide mobility for residents residing in slum areas. In Mostar, Botswana, the city redesigned war-torn urban areas into vibrant public spaces to remind the public of the devastation left by conflict and to promote reconciliation. This can potentially serve as examples for post-conflict environments in South Asia. In Cape Town, South Africa, the government has recently implemented a public space strategy to provide urban public space in and around the city on a larger scale. The bottom-up regeneration of Shanghai’s Tianzifang neighborhood has rejuvenated a historic alley, acting as a catalyst for city-wide urban regeneration to transform the city and increase its cultural and economic vibrancy while increasing livability.

Despite the numerous successful examples, the need for public spaces has not been given the attention that it deserves, in terms of policy and action in developing countries. Cities must recognize the role that quality public spaces can play in meeting the challenges of our rapidly urbanizing world.
Topics
Governance
Digital Development
Infrastructure & Public-Private Partnerships
Jobs & Development
Social Protection
Countries
Afghanistan
Bangladesh
Bhutan
India
Maldives
Nepal
Pakistan
Sri Lanka
Regions
South Asia Hi Ethan Kent,
Thanks a lot for your comments and interest in the topic. And many thanks for sharing the very exciting upcoming event in Stockholm and inspiring articles. Public spaces certainly can be a great instrument to transform global development, particularly in the poorest parts of the world. They can deliver better economic, social and environmental values, which can also help to achieve the World Bank twin goals - ending extreme poverty and improved shared prosperity. As you well pointed out, it will be even more significant for the achievement of the SDGs. I agree with you that provision of good quality public spaces itself is not enough. It needs to come with other things such as active placemaking and community-driven initiative, etc. Definitely, we are happy to have an opportunity to discuss on this and hear more about ‘Place-led development’ and Placemaking from you.

Public space can be a way to transform global development.
Great to see this coming from the World Bank! "Public space-led development" would be terrific progress, but we we really need to achieve the multiple outcomes of the Sustainable Development Goals, is "Place-led development".
We are helping to lead a global campaign, with UN Habitat, to make public space and Placemaking an integral part of the New Urban Agenda. Join us in Stockholm for the final convening, building and shaping this agenda before Habitat 3:
http://www.pps.org/blog/join-us-in-stockholm-for-the-third-annual-futur…
The first diagram is a nice adaption from a 1999 diagram I created. A version of it is in this article:
http://www.pps.org/reference/place-capital-the-shared-wealth-that-drive…
We are glad to see a focus on public space, but also feel public space is not enough, and can even be detrimental if it is not a Place, with active Placemaking, by its community. Our discussion of these issues as they relate to global development:
http://www.pps.org/blog/placemaking-and-place-led-development-a-new-par…
I will be in DC next Friday if there is anyone to meet with on this at the World Bank.
Ethan Kent
Senior Vice President
Project for Public Spaces
@EBKent
@PPS_Placemaking
@FutureOfPlaces

We have the largest archeological UNDERGROUND RAILROAD in all of NORTH AMERICA and the Black African American community also has the lowest income per capita than any area in the metropolitan area of Kansas City - or the entire state of KANSAS.
Those in decision-making authority do NOT value the importance of allowing our "sacred-spaces" of 206 acres+ be developed and preserved / nor restored into an URBAN ARCHEOLOGICAL LABORATORY to: impact the improvement of RACE / CLASS and TOLERANCE Sensitivity trainings through JOBS with meaningful salaries and live-able wages. NOR, covert this site an EDUCATIONAL Learning tool to transfer and translate for future populations of Black Americans and other cultures about the importance of this mid-1800's cradle of LIBERTY and FREEDOM in the western world.
GREAT ARTICLE, much appreciated and this article could blend about anywhere all over URBAN neglected America -where the poor Indigenous residents are.
Additionally this article and format would be an OUTSTANDING opportunity to commence and LAUNCH a new 21st century W.P.A.( WORKING PROGRESS ADMINISTRATION ) managed by UNIVERSITY Institutions; both domestically in the U.S.A. and INTERNATIONALLY - Globally to help reduce VIOLENCE and CONFLICTS with JOBS and ENVIRONMENTAL Visionaries !!!
Thank you,
Marvin S. Robinson, II
Quindaro Ruins / Underground Railroad- Exercise 2015

Thank you great - great article !!! Perfect opportunity for a new 21st century W.P.A. ( WORKING PROGRESS ADMINISTRATION ) both domestically in the United States and Globally- Internationally: with live-able wages and meaningful salaries.
And this type of endeavor would be better managed and organized through UNIVERSITY Institutions, instead of governmental offices, because they have histories of taking new funded and applying new resources to existing budgets and the PEOPLE are left with more sufferage and misery.
Marvin S. Robinson, II
Quindaro Ruins / Underground Railroad- Exercise 2015

Many thanks for the supportive comments and sharing the issues in the City of Kansas. As you well pointed out, public spaces are relevant to not only developing countries but neglected urban areas in advanced countries. I strongly believe that carefully integrated and designed urban public spaces including “sacred-space”, which you mentioned, can bring sustainable local economic growth and social inclusion. For the less-fortuned neighbors, those spaces are more than the spaces themselves, cultural and educational facilities are more than the facilities themselves, they are centers of inclusion in the city. Thank you again for the comments.

Eighty percent of the City of Miami residents (residents who live away from the waterfront) have less park space per thousand residents to use than the residents of Dhaka Bangladesh !!!! All due to greed of elected leaders!!!

The growing NCD rates reflect upon our current strategies for urban design. Its high time the urban planners re think / re - strategise their designs so that we can reverse the NCD rates. Having free and safe access to public space plays a major role in reversing the lifestyle of city dwellers and reduction in the NCD rates. Bangalore has taken that small step in terms of organising Cycle Days in different neighbourhood (www.facebook.com/bglrcycleday). So far we have had 105 Cycle Days where people are encourgaed to walk /cycle in a blocked or protected stretch to encourage them to get back to the use of non motorised transport for short errands. Lots of other physical activities are organised by the community partners for almost 5 hours where community is seen in actively engaged with the new found recreation space. This bring back to the old memories of street as a public space! These initiatives will restrengthen the social immune system!
Manju George
Senior Program Manager
Livable City Project
ESAF, Bangalore

This is great! i've been thinking about public space as a place to start creating a better liveable city, this case would be more interesting in big cities and developing countries such as Indonesia. I believe if we want to fight climate change and stop natural resource degradation then we have to start from the center point of this problem, Urban Area! Glad to read this blog from WB staff, Please keep me in the loop with any action taken by WB any World organisation to my email [email protected]

Public Space is the great equalizer in cities. Well designed and well implemented public spaces works for everyone irrespective of their economic status or migration history. For poor communities it brings even more value added. Safe and Secure spaces for vulnerable communities improves the quality of their living conditions both socially and economically for young girls and boys, children and the old and the physically challenged and for adult men and women.
Most big informal settlements in the cities are like cities within a city and have their own parallel life. There is a symbiotic relationship as the host city directly benefits from the goods and services produced within these informal communities. Investing in Public spaces in these poor communities improves the general quality of life for the rest of the city. Safe and healthy communities lead to safe and healthy cities.... very simple and easy to implement small, affordable, projects by communities. The World Bank CDD projects can be scaled up in urban areas to include informal settlement upgrading and the upgrading of informal markets.......