What’s keeping India in the dark?

Statistics show that what is commonly perceived as an energy gap in India is actually an efficiency gap.

To boost and sustain its energy supply, India needs urgent investments and reforms to fix the inefficiencies that plague its entire electricity supply chain.

But first, the good news. In 2018, every village in India got connected to the grid .  That same year, power shortages declined dramatically to 0.9 percent from 8.5 percent in 2012.

As for clean power, India has become one of the world’s leading countries in renewable energy and aims to add 227 gigawatts of green electricity by 2022.

True, India today generates more power than ever. Yet, 178 million Indians still lived without access to grid-connected electricity in 2017.

On top of that, air pollution from coal-powered plants contributed to 82,900 deaths across India in 2015.

Given its rapidly growing economy, demand for power in India is expected to triple by 2040.

The country faces a monumental task to meet this demand while protecting its natural environment and the health of its people.

As I write in my new report, ‘In the Dark’, power distortions cost India much more than previously estimated: $86 billion in 2016—that is 4 percent of the country’s economy. 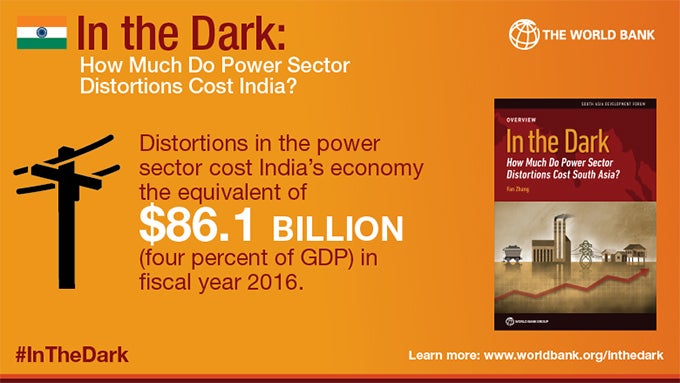 What lies behind India’s energy inefficiencies?

Problems begin upstream, or more specifically underground, in coal mines, where a lack of competition discourages the use of new technologies.

Only one of 10 underground coal mines in India is mechanized, and the average output per labor shift at Coal India’s underground mines was less than one ton in 2016  — compared to 25 tons in the United States.

Despite having the world’s fourth-largest coal reserves, India fell 14 percent short of meeting its demand for coal in 2016. Power plants that were further away from the mines faced greater coal shortages on account of high rail freight tariffs.

And state-owned power plants used 16 percent more coal per unit of electricity produced than independent power producers between 2000 and 2012.

Further to that, electricity subsidies and inefficient electricity generation, transmission, and distribution are also factors in power shortages.

More than 20 percent of electricity was lost in transmission and distribution in 2016 — much higher than anywhere else in the world.

The challenge for India is to provide affordable power to farmers and families while ensuring that power costs for industrial users do not drive down competitiveness and exports  in the manufacturing sector.

Power subsidies to farmers also contribute to environmental harm. Free electricity for agriculture made India the world’s largest user of groundwater — a non-renewable resource —with consumption increasing 700 percent between 1950 and 2014. 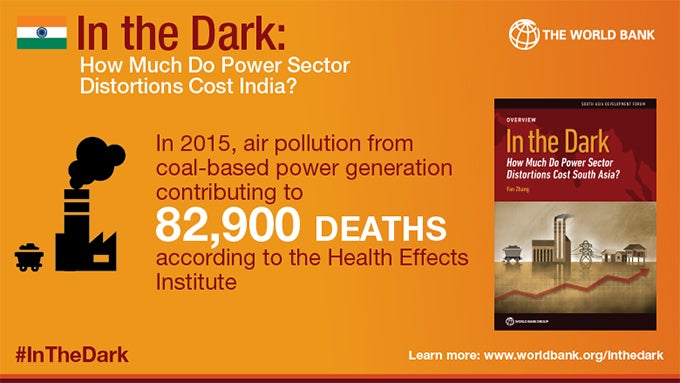 Power sector reforms should be a top priority for India

For example, ensuring nondiscriminatory access to coal for both public and private power plants would promote more productive use of fuel, and improving the fuel efficiency of state-owned power plants would significantly increase power supply.

Promoting competition and using incentives to link tariffs with operating efficiency would help improve the performance of utilities, for corporatization without fundamental changes in incentive structure does not guarantee improved performance.

If well designed, these reforms will directly benefit all Indians, especially the poorest, by increasing access, improving reliability and reducing cost and emissions. 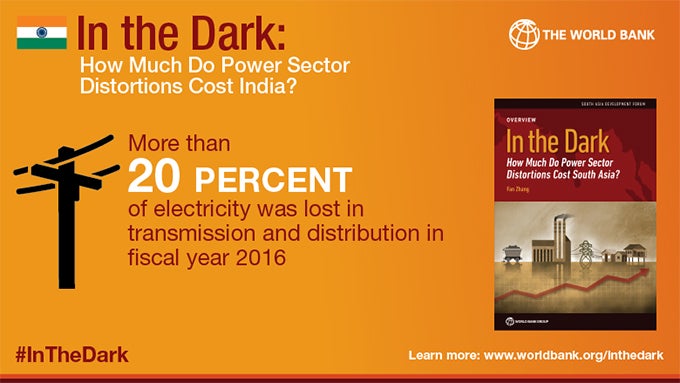