Melissa Thomas, author of Govern like us, speaking at the World Bank recently raised a very interesting question: is our expectation that poor countries with limited resources can deliver high-quality governance unrealistic?

Can these countries provide the public goods and services that citizens demand and need, to be able to forge a strong social contract?

It is in that context that I thought of Sri Mulyani’s appeal during the Spring Meetings when she spoke of the need to clamp down on tax evasion and avoidance and boost the domestic resource mobilization (DRM) capacities of developing countries as a means of finding resources for financing development going forward. 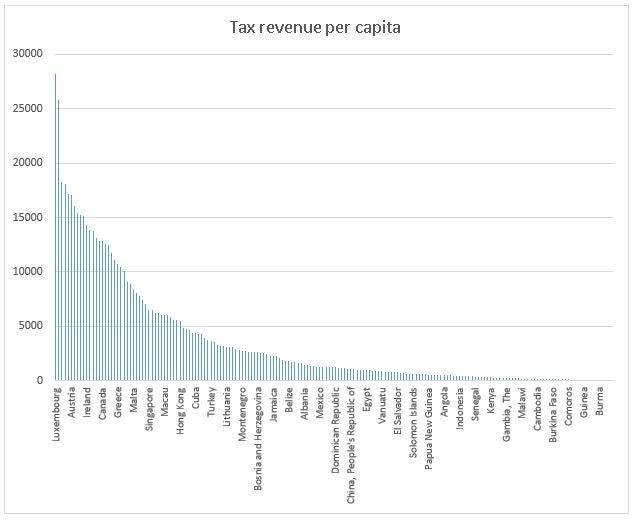 The figures for revenue per capita of the US over the last century help us see the problem in its proper perspective. As far back as 1936, the per capita revenue in the US was $503, and since then it has grown steadily. 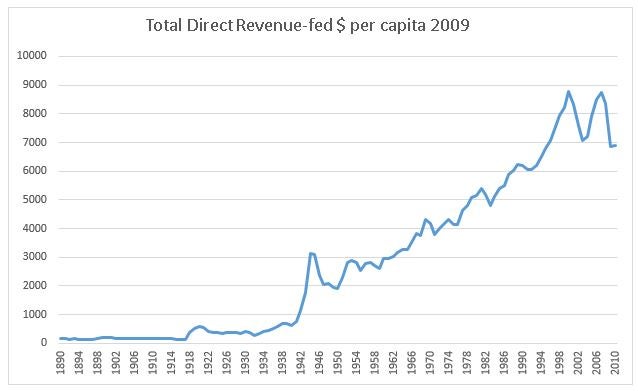 It is in the poorest countries, which have very low levels of revenue per capita, below even $500, where the biggest challenge lies: can we hope that these countries can finance their development goals exclusively from their own current resources? The answer obviously, is no.

This leads us to two conclusions: one, the Bank’s role in undertaking tax and revenue mobilization reform projects to increase DRM capacities in developing countries is critical; and, two, DRM cannot completely replace overseas development assistance (ODA) in the poorest countries.

On the first, the World Bank can do a lot through its IPF and TA projects in the area of tax and revenue mobilization to enhance revenues per capita.

The Copenhagen Consensus Center has found that there is a very high return on investment in these projects: every dollar spent on tax administration reform and modernization yields 45 dollars , a 4,500 percent return!  It appears to be imperative that the World Bank deploy sufficient resources to increase the number of projects in the area of tax and revenue mobilization. 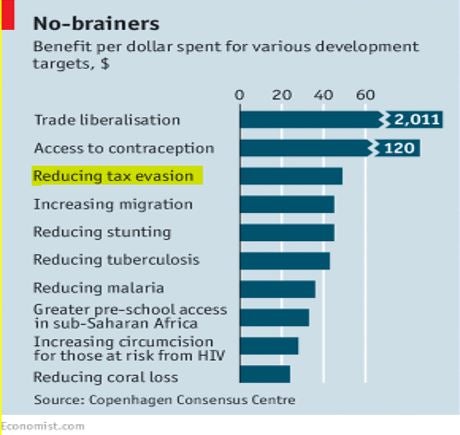 However, there is a time lag between implementation of tax modernization projects and the results becoming visible in terms of higher revenues.

For some of the poorest countries with very low revenues per capita, despite Bank support, the resulting higher revenues will still be insufficient for achieving development goals. For these countries, the world must plan to supplement their DRM efforts with ODA to help them meet the Sustainable Development Goals.
Topics
Financial Inclusion
Financial Sector
Governance
Poverty
Digital Development
Regions
The World Region Both the World Bank and ODA budget supplements will still struggle to deal with the development gaps highlighted by this article. While assistance and capacitating developing countries to collect tax better might assist, willingness to pay by citizens from poor countries whose levels of corruption are high will still present a problem.

Thanks, an excellent point, which is at the heart of the "chicken and egg problem" in taxation: poor revenues don't let governments provide a high level of goods and services, leading to low tax morale, leading to low tax revenues.... It is a very big challenge to break that vicious cycle; that is where the role of the Bank is critical.

DRM efforts and ODA alone will not address the public finance problems that many countries face today. Also urgently needed are public enterprise reforms, including privatization, and efforts designed to substantially improve the efficiency and effectiveness of public expenditures. Public policy actions along these lines can be expected to be of great help in meeting the public finance challenges, including the challenge of mobilizing the requisite public resources for meeting the Sustainable Development Goals.
But doing all this is not going to be easy. An article in the July/August 2013 issue of The Atlantic ("Can Government Play Moneyball?: How a new era of fiscal scarcity could make Washington work better") reveals how difficult it is to improve the efficiency and effectiveness of government expenditures in the United States.
In February 2005, the Government of India launched an apparently excellent initiative – the Outcome Budget (OB) – with the objective of changing the culture of measuring performance in terms of the amount of money spent against the budgeted allocations, to one of measuring performance in terms of the delivery of the outcomes that people are concerned with. The Government assumed that those responsible for implementing OB will behave the way it expected them to behave. Things don't happen that way. The Government didn't do the requisite homework and didn't put in place the requisite structure of incentives to influence the behaviour of the concerned people along the expected lines, with the result that the OB has failed.
Rajul and his colleagues in the World Bank might like to mull over what I am saying and explore the role that the Bank may play in addressing the issues in question.
Anand P. Gupta

I agree with these useful comments. The Bank does work at several levels, notably the Governance Global Practice does a lot of work on SOE reform and public finance management.
On the Outcome Budget, I was working in the Finance Minister's office then, and remember distinctly how this excellent idea died an uncelebrated death. Many lessons to be learnt there.

This is an excellent post and makes a very important point about how unless DRM goes up, many development goals will remain out of reach. Given the high level of informal employment even amongst the non-poor this may not be an easy issue to resolve in the near term though.

Thanks Nachiket. Certainly a difficult problem. But, one of the things we in the Bank are working on now is what tax policy and administration strategies can we develop to tackle informality. It must be a multi-pronged strategy: at one level, sharpen enforcement capabilities in tax administrations to better curb evasion and tax leakages through the shadow economy, at another, incentivize moving to a cashless economy, and third, simplify tax law and administration to make compliance easy and reduce barriers to formalization.

Was Qatar not included in the list of countries having per capita income greater than $10k?

My experience with our Transportal Vigeye GPMS FMS has also been similar. In BBMP by using this Transportal, several hundred crores of Property Tax, Advertisement Tax and Trade license fees evasion has been noticed and brought to the notice of BBMP administration in the last three years. Now the attempt is being made to throw the use of the innovative IT system from BBMP. Vested interests rule the roost in Bengaluru Mahanagarpalike to evade and perpetuate Tax evasion in the city government. World Bank that has studied the implementation of these ETools in BBMP, should now focus on a Study of amount of Tax evasions and waste of its development funds given for building city infrastructure. The use of such transparency tools should be tied to development funds given. This is the first step in any reform process.

Hi...Hope you recollect I am the journalist from Tribune covering the Finance Ministry... read you price on IIM could we connect ? I write for the Organiser these days...look forward...rgds