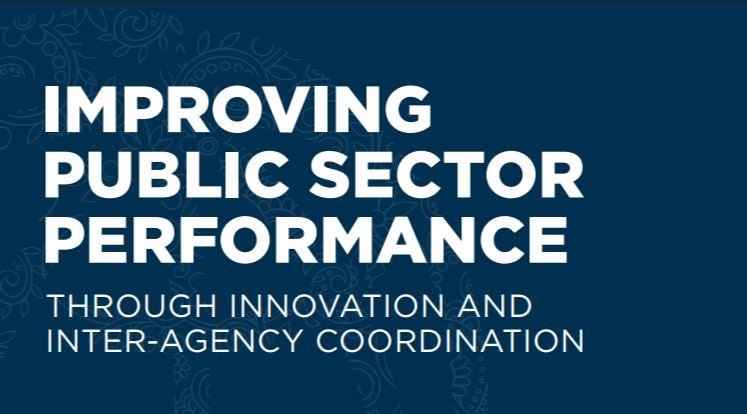 Almost daily, headlines in the world’s leading newspapers are full of examples of public sector failures: public money is mismanaged or outright misused; civil servants are not motivated or are poorly trained; government agencies fail to coordinate with each other; and as a result, citizens are either deprived of quality public services, or must go through a bureaucratic maze to access them.

These public-sector challenges are often present even in the world’s most developed countries. They are of course further exacerbated by lower levels of development.

So what hope do low and middle-income countries have to make their public sectors function more effectively? Is this just a futile enterprise altogether?

We believe it is not. Our new Global Report, Improving Public Sector Performance Through Innovation and Inter-Agency Coordination, argues that positive change is possible in many low and middle-income countries.   The report collects 15 inspiring country cases of such reforms and shows that such change does not necessarily require huge financial investment or complex IT systems. What seems to be required, instead, are five interconnected drivers of success:

The cases in the report provide ample illustrations of how these drivers worked in practice, including the following vignettes: How do all these changes come about? One size, of course, does not fit all; different solutions may be appropriate for different contexts. Trial and error is expected, and flexibility is key on the path to finding the best fit for a particular challenge and context.  Progress is possible if governments keep trying to improve, even while stumbling, and keep learning from pitfalls and adapting their approach to achieve the desired change.

All these ideas are encapsulated in the well-known Chinese saying, “crossing the river by feeling the stones.” This means that each experiment that worked for some governments can be considered a stepping stone for others, but it needs to be tried out, and possibly adjusted to the specific context at hand. Documenting such experiences thus becomes important as an inspiration or catalyst for further trying and adapting, rather than as a prescription for an approach that can be directly emulated.

The report also shines a spotlight on a key public-sector performance topic: policy and inter-agency coordination.

In today’s world, governments and the public sector are facing increasing pressures to perform at a higher level than ever before. While this report does not provide all the answers to public sector performance challenges, it analyzes innovations that have worked and identifies key factors that have contributed to their success. However, the overarching element of success is strong coordination to ensure that governments and their ministries, departments, and agencies are no longer operating at cross-purposes.

Through coordination, performance can be boosted, and through innovation and experimentation one can get a glimpse of the other side of the river and ideally the direction of the next stone.

The report will be launched on October 29, 2018, at the World Bank headquarters in Washington, DC. It is available for download here. "For reforms to endure, one ultimately needs to create sustainable institutions". This for me is the learning point in the whole paper as it concerns low- and middle-income countries especially in sub-Saharan Africa.
An important area where searchlight needs to be beamed for proper scrutiny in sub-Saharan Africa is the private sector and its accountability profile. A lot is happening in this important sector that require urgrnt evaluation in terms of their impact on performance, productivity and executive management operation within the confines of best practice protocols. Protocol violation appears to be the bane of under-performance and corporate frauds in the private sector of the economy in sub-Saharan Africa. There is need to re-define the work ethics requirements for executive management in the private sector in order to shore up accountability, productivity and protocol compliance managers.

increasing performance especially in the third world Africa needs positive dictatorship like in the case of Rwanda where there are few power cent res to derail development agenda. In Kampala Uganda the city management has been failed by the Mayor who wants to operate like a technical staff. The power centers are in the Council, the President, Minister for Kampala, the executive director, opposition politicians, ruling party....makes it difficult for decisions. how do you please everyone. Governance structures and attitudes drive development performance agenda.

A valuable addition to the five drivers of success in improving public performance is the human factor itself. It is people who run the government. The primary consideration is the person's morality and culture. As the principal actor in the organization, his credibility and uprightness will be the ingredients for a better service. The organization i.e., government can only be as effective and trustworthy as the person working in it. The government on a holistic posture can only be efficient and effective as the sum of its parts.

It is also the human behavior that can bring success to public performance. As workers in the government, the persons in the bureaucracy need to be morally upright, professional and adheres to meritocracy. The government , holistically can only be as effective and effecient as the sum of its parts.

Important aspects for public sector performance are motivation of human resources and objectivity in the system of reward and punishment at all levels of government and management. Transparency, timely feedback mechanism, adoption of technology are essential for Good Governance system are essential to create sustainable institutions. The Report highlights and illustrates these aspects

Motivation of Human resources and a system of their training to update their knowledge are essential for public sector performance. Objectivity in decision making, transparency and adoption of right technology and for good corporate governance at all levels of government would be an important factor to create institutions for sustainable development. The Report highlight and illustrates these factors.

Improving public sector performance is indeed critical. The challenges of enabling the services with innovation with a high level of political support for resilience in critical. As Governments are challenged to deliver improved services amidst the scares of epidemics, it is important to work towards innovation. I thank you for sharing.

Improving public sector performance is indeed critical. The challenges of enabling the services with innovation with a high level of political support for resilience in critical. As Governments are challenged to deliver improved services amidst the scares of epidemics, it is important to work towards innovation. I thank you for sharing.