Getting to 15 percent: addressing the largest tax gaps

Tax revenues above 15 percent of a country’s gross domestic product (GDP) are a key ingredient for economic growth and, ultimately, poverty reduction.

Recent literature supports this idea. Using historical data from 139 countries, Gaspar, Jaramillo, and Wingender (2016) estimate that over 10 years, per capita GDP is 7.5 percent larger than would otherwise be expected in countries with tax revenues above the 15 percent “tipping point.”

In countries below that tipping point, increasing domestic resource mobilization (DRM) is key — both for economic growth and meeting development goals. Getting to at least this 15 percent level helps countries generate sufficient domestic resources that can be invested in health, education, and infrastructure.

Policy initiatives like Maximizing Finance for Development and moving From Billions to Trillions also require fair, efficient, and effective tax policies and administration. To this end, the Addis Tax Initiative and the 2030 Agenda for Sustainable Development Goals (SDGs) call for more technical cooperation on taxation.

So, what does the latest data tell us about countries below the 15 percent threshold? And where is the largest potential for DRM? Let’s take a closer look.

Many developing countries have a low tax-to-GDP ratio. The most recent data indicate that about 60 countries fall below the 15 percent threshold.  The following figures show how tax revenues and per capita income progressed in each country from 1990 to 2016. Just click on a country to see its unique path.

In cases like China, for example, the development path follows the 15 percent narrative, with rising tax revenues preceding increases in per capita income. In countries with significant non-tax revenues, the relationship is different. Malaysia or Saudi Arabia, for example, enjoy significant oil revenues.

The countries with a tax-to-GDP ratio below 15 percent can be divided between haves and have-nots — those with significant non-tax sources of revenue and those without. For example, this group includes wealthy oil exporters like Kuwait and Saudi Arabia. But it also includes oil exporters, such as Nigeria, that experience revenue shortfalls.

Within this group of countries with tax-to-GDP ratio below 15 percent, it’s interesting to see where the largest absolute tax-revenue gaps exist. In other words, what’s the total gap between current tax revenues and 15 percent of GDP?

First, the largest oil exporters are excluded, because they have alternative revenue sources. Hong Kong SAR, China and Singapore are also excluded, so that we can focus on emerging economies. That leaves a list of 49 countries with tax-to-GDP ratios below 15 percent. Expressing that gap in 2016 USD yields the following: 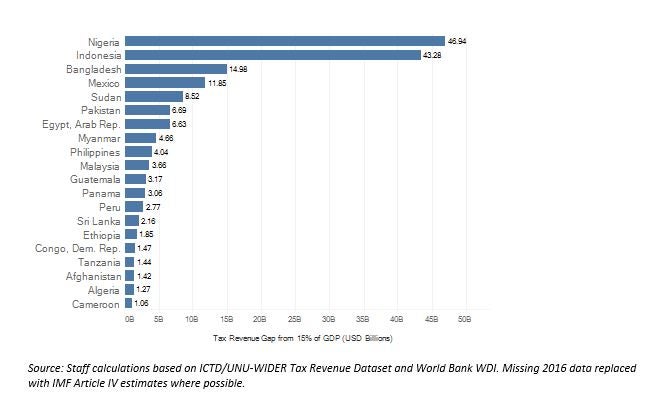 The volume of official development assistance (ODA) is also key to consider. Domestic tax revenues are critical to sustaining development funding and freeing ODA resources for other priority investments. Notably, the total ODA for the countries on this list ($46 billion) is dwarfed by the total tax-revenue gap ($180.8 billion).

Closing this gap would more than offset the total net ODA in the top countries here — particularly in Bangladesh, Pakistan, and Egypt. In other cases — such as Afghanistan, Tanzania, Ethiopia, Uganda, Sierra Leone, and Haiti — the net ODA exceeds the tax-revenue gap. Closing the gap in these countries is important for growth, but it can’t fully offset ODA.

In this context, there’s no universal policy prescription for taxation. Each country faces a unique set of circumstances. In some cases, non-tax revenues are important alternative revenue sources. In others, low tax revenues are the outcome of complex political-economy issues that can’t be changed quickly or easily.

That said, applying the 15 percent tipping-point methodology — and analyzing the potential for domestic tax revenues to supplement or replace ODA — provides a compelling starting point for prioritizing international support for reforming and improving countries’ tax systems, which can then be more effective and efficient in generating much needed resources to meet urgent development goals.

The table below provides a starting point for developing a short list of priority countries. In absolute terms, Nigeria, Indonesia, Bangladesh, and Mexico have tremendous revenue potential. Countries with high-levels of ODA might be candidates for further prioritization in terms of tax reform.

To conclude, it is essential for developing countries to close the total tax-revenue gap (estimated at $180.8 billion) and reach the 15 percent of GDP in tax revenues as a way of maximizing finance for development  and generating sufficient domestic resources to meet their development goals. 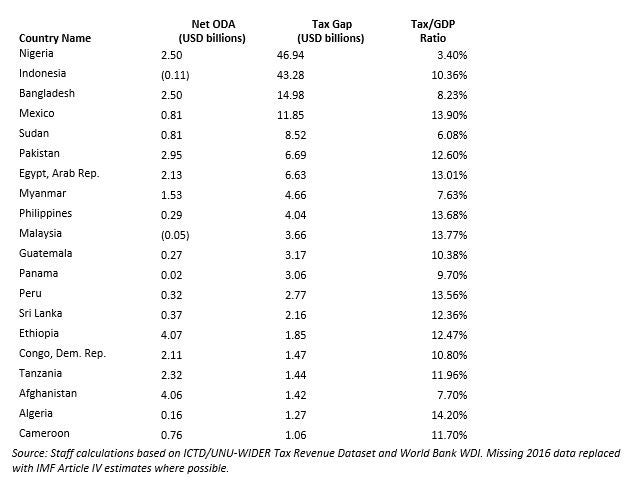