Economists tend to agree on the importance of competition for a sound market economy. So what’s the problem when it comes to governments competing to attract investors through the tax treatment they provide? The trouble is that by competing with one another and eroding each other’s revenues, countries end up having to rely on other—typically more distortive—sources of financing or reduce much-needed public spending, or both.

All this has serious implications for developing countries because they are especially reliant on the corporate income tax for revenues. The risk that tax competition will pressure them into tax policies that endanger this key revenue source is therefore particularly worrisome.

Keep Up With the Others

Many have argued that tax competition between governments can trim wasteful spending and lead to better governance; the ‘starve the beast’ argument. But the mobility of tax bases across national borders makes this benefit less clear, whether the base relates to labor income, commodity transactions, or most commonly, capital income.

More technically, countries tend, with good reason, to tax things that are not highly responsive to taxation. But international mobility means that activities are much more responsive to taxation from a national perspective than from a collective perspective. This is especially true of the activities and incomes of multinationals. Multinationals can manipulate transfer prices and use other avoidance devices to shift their profits from high tax countries to low, and they can choose in which country to invest. But they can’t shift their profits, or their real investments, to another planet.

When countries compete for corporate tax base and/or real investments they do so at the expense of others—who are doing the same. By failing to exploit the lesser responsiveness of tax base and investment at the collective level than at the national level, countries thus risk mutual harm by eroding a source of revenue that may well have been more efficient than the alternatives available to them.

Headline corporate income tax rates have plummeted since 1980, by an average of almost 20 percent.  This doubtless reflects a variety of effects at work—changing views on the growth impact of corporate taxation, for instance—but it is a telling sign of international tax competition at work, which closer empirical work tends to confirm. 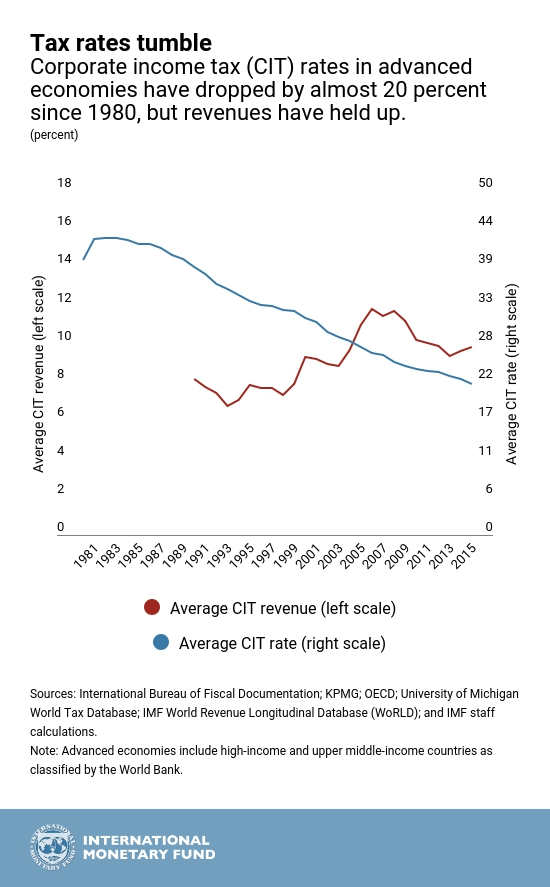 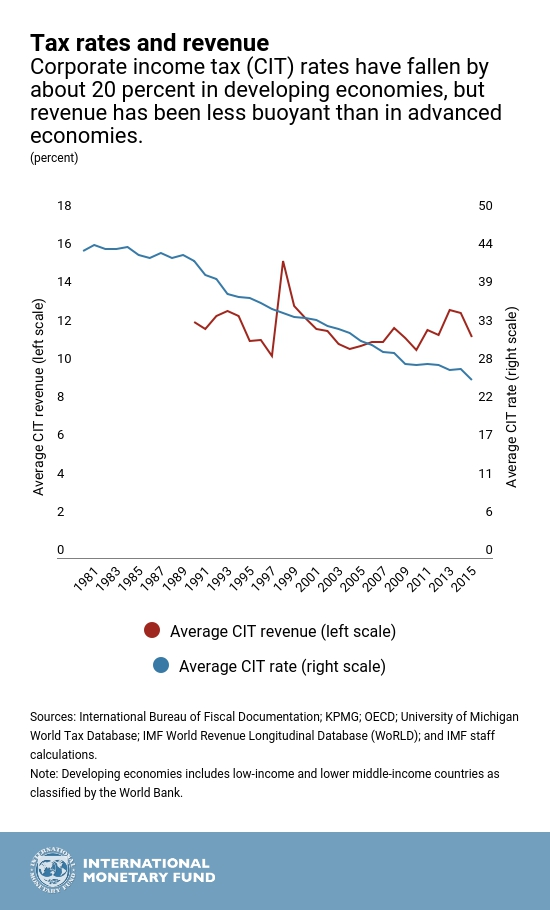 And even though revenues have remained steady so far in developing countries and increased in advanced economies—perhaps because, for unrelated reasons, the share of capital in national income has increased—there is nothing to guarantee that this will continue. And some developments could make tax competition more intense: if the OECD-G20 ‘BEPS’ project reduces tax avoidance, for instance, competition through other means could increase.

To better understand these issues and how they might be addressed, the IMF and World Bank recently gathered together a hundred or so tax experts and officials. Embert St. Juste, of the Ministry of Finance in St. Lucia, for instance, noted that the members of the Organisation of Eastern Caribbean States have been competing with increasing fervor over foreign direct investment and tourism. And the Finance Minister of the Republic of Serbia, Dušan Vujović, said that with greater globalization, all countries have been dragged, willingly or not, into the fray.

Kimberly Clausing, an economics professor at Reed College, presented new work suggesting that paper profits may be much more sensitive to tax rates than previously thought. She cited a recent paper that finds that for every percentage point drop in the average tax rate in a low-tax jurisdiction, profits reported there by foreign corporations of U.S. multinationals increase by between 3.5 and 7 percentage points. This remains contentious. Paul Ryan from the Irish Department of Finance suggested that the impact, particularly from more advanced economies to less, has been exaggerated. But tax competition is generally seen as a real threat to revenue, most notably for developing countries.

There is an answer: use international coordination to stop, or at least limit, the race. That, however, is much more easily said than done.

Partial solutions can help but are inherently limited. As Michael Devereux of the University of Oxford stressed, if only some countries coordinate, they can make themselves more vulnerable to competition from those outside the group. And even if all coordinate, they can remain vulnerable if they do not do so over all relevant aspects of the tax system. Nonetheless, partial approaches can help.

Some recent proposals would fundamentally change corporate tax systems. Gaetan Nicodeme from the European Commission explained its proposal for a Common Consolidated Corporate Tax Base. Under the first stage of this, businesses operating in more than one European Union country would consolidate their taxable profits across borders so the profits in one country could be offset against losses in another.

In a second stage, their profits within the EU would be allocated for tax purposes across member states by a formula reflecting the proportions of their assets, employment or other indicators of their activities in each. This, however, would not eliminate tax competition, since governments would still have an incentive to use low tax rates to attract investment, workers or whatever else appears in the allocation formula.

An alternative system that has attracted considerable attention recently in the United States is the destination-based cash-flow tax (DBCFT) under which taxes are levied based on where goods end up (destination), rather than where they were produced. If adopted universally, and well-designed, this would ease pressures of tax competition. But if adopted unilaterally by one or a few countries, it would amplify profit shifting problems for others. This is because, intuitively, profits from sales elsewhere could then be taken tax-free in those countries, which would likely lead those without a DBCFT to compete more aggressively, or adopt one themselves.

Issues of international tax competition are not going away anytime soon, and that there is a lot at stake for developing countries. In the face of possible tectonic shifts in tax systems, such as a move to a destination based corporate taxation, it has become even more important to understand the cross-border impact of national tax policies and how governments react to them.

This remains an issue of debate and study, and both the IMF and the World Bank plan to continue this analysis, including at a high-level event co-organized with the Ministry of Finance of Indonesia. Part of the Voyage to Indonesia leading up to the World Bank-IMF Annual Meetings in 2018, the discussions will focus on the challenges that tax competition poses for the members of the Association of Southeast Asian Nations.

When developing countries "race to the bottom" in competition over tax, it threatens govt revenue

Competition is good for a sound market economy but what if tax competition actually hurts countries? Thank you for keep us posted about tax competitions issues in developing countries.

I agree with most of this, but wonder about who would actually bear the incidence of a DBCFT. Given its similarities to a standard VAT, many fear that it would end up as just another regressive consumption tax, exacerbating the problems of inequality (inequality between individuals/households, not necessarily between nation states).
In this regard, I would note the comment above: "revenues have remained steady so far in developing countries and increased in advanced economies—perhaps because, for unrelated reasons, the share of capital in national income has increased..." How sure are we that the increased share of capital was "unrelated" to the shift in the tax burden from CIT to VAT and other consumption taxes? I thought Piketty made a pretty good case that tax reforms over the past several decades had plenty to do with it.

Very interesting topic. I have two comments/questions for the author/readers:
1. There are some authors that consider tax competition as a positive issue since those countries decreasing the CIT rate attract MNE to their economies and therefore increase employment rates, build routes, consumption, etc. What would be a contra-argument to this?
2. In regard to DBCFT, "under which taxes are levied based on where goods end up (destination), rather than where they were produced", it may lead to an increase of revenues in those countries with high rates of consumption, increasing inequality with developing countries, that usually have low rates of consumption in relation to the developed ones.
Have a wonderful day!

The theory of reducing corporate income tax rates as an incentive to attract more business along with an overall increase in tax revenues and employment is sound. However, there is a caveat-when exercising this practice in less than developed, underdeveloped and developing countries, other factors come into play at different levels
that counteract the positive benefis gained by simply reducing or rearranging the corporate tax rate, i.e., long-term political stability, crime rates, infrastructure health, continued access to markets, etc. These aforementioned factors do not however negate the positive benefits of tax competition among countries whatsoever.