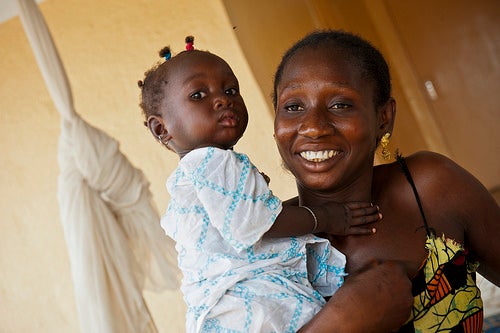 The report also noted that of the 183 countries and territories included in the estimation exercise, only 67 countries mostly from high income countries had MMR directly computed from civil registration data (Figure 1). The remaining countries had MMR estimated from a multilevel regression model. The range of uncertainty or confidence intervals of the MMR estimates from statistical models are so wide that they cannot be used for short term monitoring and evaluation of maternal health programs (Table 1). Neither do they produce MMR estimates at sub-national level to inform planning and implementation of programs. Considering that the MMR estimates from household surveys such as the demographic and health surveys (DHS) have limitations (such as capturing pregnancy-related deaths instead of maternal deaths, and providing estimates for several years prior to the survey instead of the reference year [Table 1]), the MMEIG includes the DHS data in a statistical model in order to obtain more robust MMR estimates. This sometimes puts countries in a quandary as to which one to use in official reports.

Figure 1. Map with countries showing the source of data for maternal mortality estimates, 2013 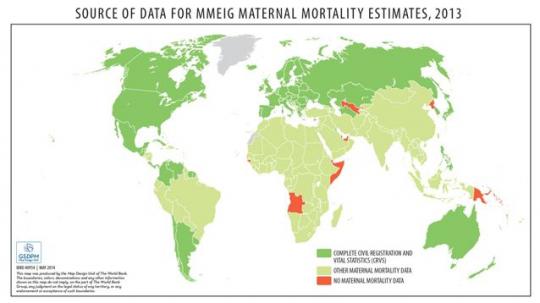 This is why it is imperative that all countries should endeavor to strengthen civil registration and vital  statistics (CRVS) systems to produce routine data on maternal and child mortality rates as well as other relevant statistics for monitoring the performance of health systems or achievement of universal health coverage. Indeed, the 116 countries shown in Figure 1 are unlikely to meet the recommendation of the Commission on Information and Accountability for Women’s and Children’s Health that “by 2015, all countries have taken significant steps to establish a system for registration of births, deaths and causes of death, and have well-functioning health information systems that combine data from facilities, administrative sources and surveys”. 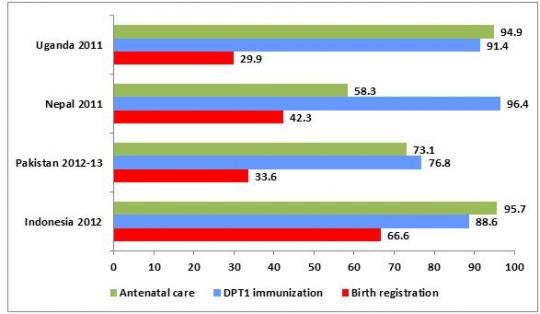 ICT can be used in matters of Maternal and Child health. With the improvement in technology, mobile phone-based case management tool can be used to track client by Community Health Workers. With simple tool for mobile users, one can directly digitize information providing access to local health worker and give agencies vital statistics. The software must be an "open source," for easy operation and gives platform further improvement through innovation. That software can create a group of questions and messages that the user views sequentially on the mobile phone.

Sam--Thanks for sharing this blog which highlights an often neglected dimension of health systems. As pointed out on a recent blog, the power of ICT indeed can be critical element of the arsenal to strengthen health systems not only by improving the standarized collection of data by also it could be harnessed to improve maternal and child health. As I recently learned in Ghana, an initiative by Mobile Technology for Community Health (MoTeCH) and the Grameen Foundation, piloted in the Upper East Region and now being replicated in the Central, Greater Accra and Volta Regions, is allowing women with limited literacy skills to be informed in the local language about the “do’s and don’ts” in pregnancy and childbirth. Women also receive reminders on clinical appointments, due dates, and required medication and immunization through their mobile phone. So the potential of ICT for improving vital statistics is waiting to be realized!
Please see: http://blogs.worldbank.org/nasikiliza/preventing-maternal-mortality-yar…

How Cambodia can contribute to this publication?

Thanks for asking. The Global Civil Registration and Vital Statistics Scaling Up Investment Plan 2015-2024 was released on May 28, 2014. It is available at: http://www.worldbank.org/en/topic/health/publication/global-civil-regis….
Cambodia is among the 75 Countries Prioritized by the Commission on Information and Accountability
Thank you