In 2000, one in three Peruvian children under 5-years-old suffered from chronic malnutrition. Several years later despite high economic growth and hundreds of millions of dollars spent in nutrition programs, the stunting rate barely inched down. Then, something happened. 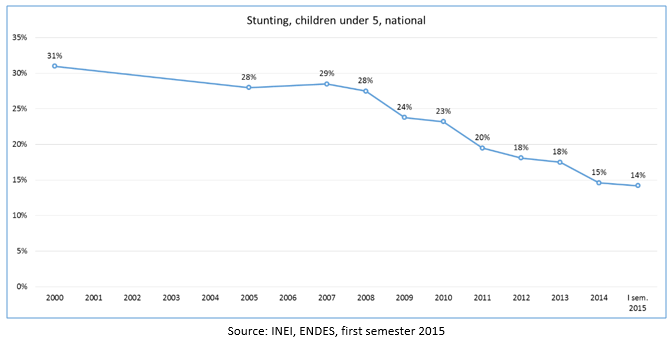 Since 2007 stunting fell by half to 14% (Figure 1). Nearly half a million children under 5-years-old have escaped chronic malnutrition and are off to a brighter start in their lives. This ranks among the most successful recent achievements in improving child nutrition in the world.

There are three main factors.

The “Child Nutrition Initiative,” spearheaded by several national organizations and international agencies around 2006, argued that Peru needed specific goals and targeted policy efforts to translate growing prosperity into reductions in child stunting. This was very influential in getting all presidential candidates to sign a commitment to make child stunting a priority.

After Alan Garcia was elected President, in his inaugural-speech he committed to the “5-by-5-by-5 goal” --  reduce stunting by 5 points in 5 years for the under 5. This ambitious, yet feasible, goal was then turned into specific regional targets. With a clear focus of what was needed, the government then focused on how to do it.

Second, Peru adopted a multi-sectoral strategy supporting both the demand and supply of nutrition services.

Peru empowered parents by providing them with information to make stunting and its consequences visible. Child malnutrition –being too small (low height-for-age)— was largely invisible, especially in poor indigenous communities living in rural high altitude areas.

To this end, the World Bank produced and widely disseminated a short video (“My Future in my First Centimeters”) that popularized simple-to-understand standards of what it means for a child to grow healthy – 24 centimeters in the 1st year of life, and 12 more in the 2nd year. To demonstrate that stunting can be eradicated, the video also showcased successful experiences such as My Good Beginnings, spearheaded by UNICEF together with NGOs and other community organizations. Short TV and radio spots of this video still run today.

The government leveraged the potential of conditional cash transfers to poor families through the existing CCT program, Juntos, to reduce child malnutrition by strengthening the incentives for families to take children to nutrition and health services for growth promotion checkups and early stimulation. 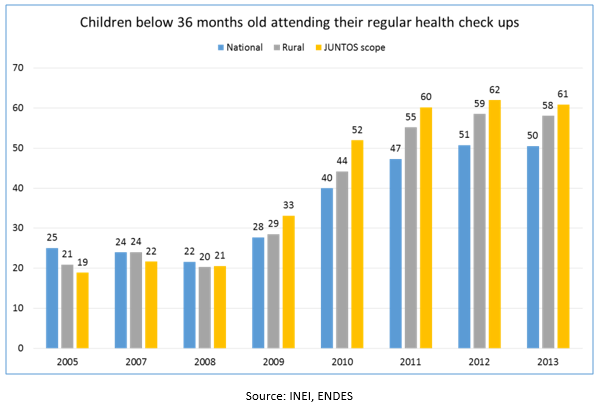 Then, to respond to the increased demand, the government expanded maternal and child nutrition services (Figure 2).The number of child-growth checkups and the quality of nutrition counseling to poor families improved. Coverage of complete growth check-ups for children younger than 3 years increased from 25% in 2005 to 55% in 2015, and even more dramatically in rural areas, rising from 21% to 65%.  Coverage of water and sanitation also improved.  As an example, coverage of treated water increased in rural areas from 82% in 2005 to 89% in 2015.

And, finally, the government used financing for results and targeted communities with the greatest need.

The government prioritized investments in areas of higher stunting with a focus on results. The Ministry of Finance used results-based budgeting to ensure that demand and supply efforts worked together to achieve established nutrition goals through the evidence-based Articulated Nutrition Program. Each agency was held accountable to improve specific indicators, such as the number of poor children enrolled in the Juntos CCT, and the number of child-growth checkups and nutrition counseling sessions to poor families in targeted communities.

Peru’s success shows that we can achieve dramatic reductions in child malnutrition. Economic growth alone does not suffice, but it can be leveraged through a high-level political commitment expressed in smart goals, financing of multi-sectoral actions to empower parents and front-line providers to achieve results, and a deliberate focus on areas where needs and the payoff to action is the highest.

Besides its technical and knowledge assistance, the World Bank supported Peru’s efforts through budget-support financing for reforms during 2007-2011, and a small (US$25 million) results-based financing operation that was leveraged with much larger government funding and other external financing (a $61 million Euros grant from the European Commission under EUROPAN) that adopted a similar results- based financing framework. Reductions in child malnutrition were already being achieved way before the World Bank investment financing started disbursing. This is a testament of the critical importance of good policies to achieve human development results. The new aspiring leadership of Peru has ratified its political commitment to continue tackling child stunting, which gives credence to the continuation of the country’s success.

Event: Early Childhood Development: A Smart Beginning for Economies on the Rise Clear direction + Right incentives + Good leadership = A formula for success for all our development initiatives.