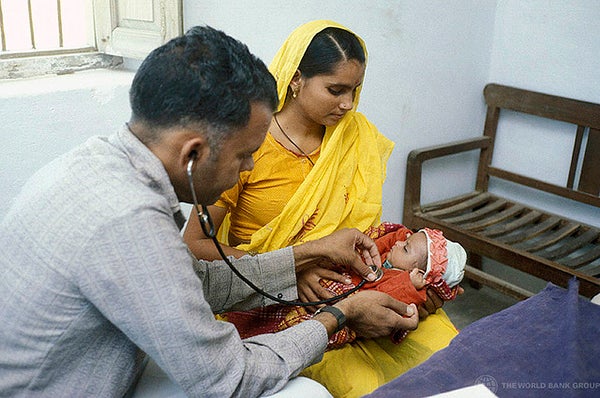 It’s that time of year again, when we observe a day dedicated to the most ambitious health goal of all: universal health coverage, or UHC. On UHC Day (Dec. 12) we commemorate the date in 2012 when the United Nations unanimously endorsed a resolution urging governments to ensure that all people can access health care without financial hardship.

In India, where most people have dug deep into their pockets to pay doctors, pharmacies and diagnostic centers (or ‘out-of-pocket spending’) as the norm for a long time, vulnerability to impoverishment caused by medical expenses remains high. Though government health spending is estimated to have steadily risen to 30% of the country’s total health expenditure – up from about 20% in 2005 – and out-of-pocket payments have fallen to about 58%, dropping from 69% a decade ago, these levels are still high and not commensurate with India’s level of socio-economic development. In fact, the average for public spending on health in other lower middle-income countries is more than 38%, while in China, government spending accounts for 56% of total health expenditure.

However, what is particularly remarkable in India’s case is that its recent strides toward UHC have followed a bottom-up approach, starting with coverage of the rural population and the poorest groups, and several states are now rapidly scaling up these interventions to larger segments of the population. For instance, Indian states such as Meghalaya, Karnataka, Chhattisgarh and Uttarakhand have expanded eligibility for government-sponsored health insurance, albeit limited in scope to specified types of hospitalization, to their entire population, building upon poor-only programs launched a few years back.

Uniquely, these states represent different geographical zones of the country, very different income levels, and also vary in their implementation modalities and benefit packages. The National Health Mission has, likewise, rapidly scaled up emergency response vehicles and institutional maternity services across the country, and now increasingly focuses on programs for free generic drugs, as well as urban health issues.

Will health coverage in India leapfrog towards UHC in the near future? India’s UHC challenge is certainly daunting, and addressing it quickly needs transformative, highly innovative and low-cost solutions.

At just about 60 dollars per capita of total health spending available in the country, India now has to pay for a dual burden of disease, with non-communicable diseases now making up the majority of the country’s disease burden statistics.

Grappling with chronic, lifelong diseases requires a radically different, multi-sectoral approach to public health, and systemic changes to address case management needs of diagnosed cases. Information systems and patient records-- which  allow continuity of information, regular follow-up and timely referral, and highlight the need to leapfrog into new, frugal technologies and other creative ways of doing business –are vital to stretch this relatively modest financial envelope to meet India’s needs.

I list here a few recent, and in my opinion, very promising developments in the Indian health sector  that many of us have worked on for years, and could be game-changers to  help the country leapfrog into affordable UHC.

New Entry-Level Accreditation Criteria for Hospitals and Health Care Providers: India is one of the 20-odd countries globally (and one of the six non-OECD member countries) with a hospital accreditation organization recognized by the International Society for Quality in Healthcare - the National Board for Hospitals and Healthcare Providers (NABH). In 9 years, NABH has accredited about 320 Indian hospitals. While this is no mean achievement, it still represents a very small fraction of the 100,000 or so public and private hospitals in India. The question is: should such a tiny fraction of the country’s people be the only ones to benefit from quality and safety in health care? NABH’s new ‘entry level’ criteria – the first stage of a new, staged accreditation process –could well be the first such game-changer, setting off a virtuous circle of improved quality and patient safety in  Indian health care, making it possible for even small hospitals to join the quality bandwagon.

Registry of Hospitals in Network of Insurance (ROHINI): The first-ever database for hospitals in India, now including more than  32,000 hospitals, has been painstakingly carved out of insurance data by the Insurance Information Bureau of India . Incorporating unique hospital identification numbers s and geographical location information for hospitals, ROHINI has taken  health sector data analytics to a new level. From emergency response to fraud prevention and disease surveillance, the possibilities are huge, and immensely important.

National Standards for Electronic Health Records: Clear IT and privacy standards for inter-operable electronic health records were recently ratified by the Ministry of Health and Family Welfare. These standards, and plans to create a new National eHealth Authority, are not only useful to avoid costly repetition of diagnostic tests and prevention of dangerous drug interactions, they are a vital building block for case management of the growing burden of non-communicable diseases. Just imagining the potential of integration with India’s unique citizen identification program s (‘Aadhaar’), linkages with insurance beneficiary databases, inter-operability with communication-compliant medical devices of all kinds and integration with the increasingly omnipresent hospital information systems, is awe-inspiring and has  huge potential to keep health care efficient and accountable.

In a 2012 World Bank Group publication, we projected that more than 600 million people in India would have access to some form of health insurance by 2015. At the close of 2015, it’s time to take stock of where we stand: Most of the health insurance programs studied in 2012 seem to have exceeded our coverage projections. Though RSBY* (the national health insurance program), had a slower rollout than originally envisaged, even this has been nearly made up by new and existing state government initiatives.

While exact numbers will need to be worked out again, back-of-the-envelope calculations suggest that more than 550 million Indians now have some form of health insurance coverage, representing a nearly ten-fold increase over the number a decade back.

Will India now sustain this momentum, build upon new, game-changing opportunities in the country, and leapfrog into greater breadth and depth of coverage? On UHC Day 2015, we hope it does, and soon. If you look at a recent question answered by the Government of India only 24% or 28 crore lives are covered under Health insurance.

While multi prong approach is planned to address various health issues , some of the challenges like high MMR/IMR, Emergence of NCD's and continued challenges from communicable disease pose a formidable challenges. Both policymakers and government should focus on areas like Screening, Primary care and life style modifications to name a few.The economic losses due to health issues are phenomenal and continue to be so should should adequate measures are not taken now. For record Insurance hardly touch 24% of Indian population.

The estimated number of Indians who hold some form of health insurance coverage has usually been reported with a time lag, and there have also been limitations of data and definitions. Thus, the number of 300m, or about 24% of Indian population, was first published in our book in 2012, with a detailed breakup and methodology included therein. Following the same methods and caveats, but using numbers based on secondary data, scheme websites and some back-of-the- envelope estimates for 2015, this worked out to 550 million now, as mentioned in the above blog (some more detailed breakup given below*). There do remain variations in how ‘insurance’ is defined and measured- for example, IRDAI and IIB include all programs implemented by commercial health insurers submitting transaction information to them. On the other hand, we use insurance in its broadest sense and also include programs directly implemented by government trusts, for instance. Also, as mentioned in detail in the 2012 publication for which these numbers were revisited, that this coverage is not complete, limited to some forms of hospitalization in most cases, and several operational challenges persist.