What do we learn from increasing teacher salaries in Indonesia? More than the students did.

Money matters in education. Recent evidence from the United States shows that increased education spending results in more completed years of schooling and higher subsequent wages for adults. Spending cuts during the Great Recession – also in the U.S. – were associated with reduced student test scores and graduation rates. Indeed, the most common critique of the World Bank’s World Development Report 2018 is that it didn’t argue strongly enough for increasing global financing for education (see here and here, for example). As a co-author on the WDR, I am contractually obligated (not really) to note that the report does state that, “achieving education goals, whether national or global, will certainly require more spending in the coming decades.” Okay, so we agree: More money.

But what do we need to spend more money on? Based on my conversations with teachers and school leaders in various countries, teacher salaries are often at the top of the list. Teachers argue that they need higher salaries so as not to need to spend their time racing around to side jobs in order to be able to support their families. They also argue that high pay will increase professionalism or induce higher effort through a sense of reciprocity. Several international organizations have echoed the recommendation, arguing that “When salaries are too low, teachers often need to take on additional work…which can reduce their commitment to their regular teaching jobs and lead to absenteeism,” or “Low pay is likely to be one of the main reasons why teachers perform poorly, have low morale and tend to be poorly qualified.” Furthermore, Ministries of Education often argue that teacher salaries need to be higher to attract the best candidates into education.

A new(ish) paper, now forthcoming at the Quarterly Journal of Economics, sheds important light on this debate: “Double for Nothing? Experimental Evidence on an Unconditional Teacher Salary Increase in Indonesia,” by de Ree, Muralidharan, Pradhan, and Rogers. You see, a new Indonesian constitution (2000-2002) substantially increased government spending on education (to 20% of the government budget), and as a result of extensive policy decisions, the Government of Indonesia opted to dramatically increase teacher salaries.

What was the policy change?
The Government of Indonesia opted to double the base pay of civil service teachers, which translated to a two-thirds increase in net pay for teachers eligible for the reform. This moved participating teachers from the 50th to the 90th percentile of the salary distribution for college graduates. (The salary increase was available to a subset of teachers who were college graduates as well as civil servants.) Initially, the salary increase was intended to be conditional on an exacting assessment of teacher subject knowledge and pedagogical ability, with training for teachers who didn’t measure up. But opposition resulted in a much weaker certification: teachers had to submit a portfolio, and even a poorly evaluated portfolio resulted in a total of two weeks of training.

The salary increase was phased in over the course of ten years (2006-2015). Each year, each of Indonesia’s districts had a quota of teachers who could begin the certification process. The research team worked with the government so that uncertified teachers in 120 treatment schools had immediate access to the salary increase at the beginning of the experiment (2009), as opposed to uncertified teachers in 240 control schools, who accessed the program over the course of the next several years. Both treatment and control teachers were distributed across primary and lower secondary (“junior high”) schools.

The evaluation took place over three school years (Year 1, Year 2, and Year 3). The certification process took about a year, so treatment teachers began receiving their additional salary around the beginning of Year 2.

What happened to teachers as a result? Teachers are definitely better off, but the limited impact on absenteeism suggests that their improved welfare may not be translating to better performance on the job.

Sometimes, a lack of impact invites the rebuttal: Well, maybe you just lack the statistical power to measure the impacts. After all, as the saying goes, “the absence of evidence [of an impact] is not [necessarily] evidence of absence.” In this case, the experiment yields pretty clear evidence of absence: “The point estimates are close to zero and precisely estimated, allowing us to rule out effects as small as 0.05 standard deviations (σ) at the 95% level in treated schools. We present non-parametric plots of quantile treatment effects and find no effect on test scores in treated schools at any point in the test-score distribution.” (And there’s more in the paper!)

But what if this attracts lots of great candidates into the teaching profession?
The authors are quick to admit: “Our results do not imply that salary increases for public employees would have no positive impacts on service delivery in the long run through extensive-margin impacts.” (The "extensive-margin impacts" refer to the attraction of more capable candidates into the field.)

Here is some international evidence they cite to show that higher salaries can attract higher quality public servants: But the authors make a novel and important point on cost-effectiveness analysis. They propose that even if the program has significant impacts on the ability of future teachers, it’s highly unlikely to be cost effective. Why? Are there still reasons to increase teacher salaries? Sometimes education reformers bundle increases in teacher base salary with performance-related reforms, as happened in Brazil, Chile, and Peru, among others. Or perhaps we simply want teachers not to have to work a second job, which is laudable. But if that’s it, then we can’t ignore the opportunity cost. In most countries, teacher salaries consume the lion’s share of the education budget (see figure below), so there are already fewer resources to implement other education programs. This is another concern that I hear raised by education leaders repeatedly. We care about teachers, but we also have to pay attention to the needs of students. 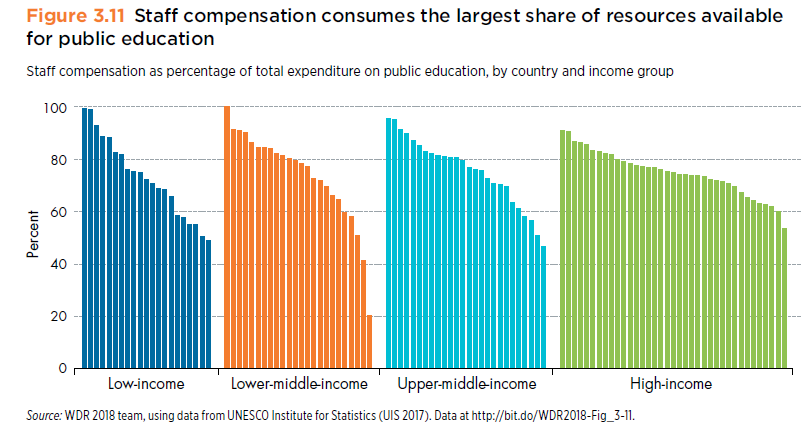 Would we observe the same results in other countries?
This is one piece of evidence from one country. Teachers in Indonesia were already paid at the 50th percentile of the college graduate income distribution, which is higher than in some other countries (see much of Latin America, for example). So it’s of course impossible to know how well these results would travel.

Yet it’s tough to get evidence on the impact of increasing salaries that separates increased teacher salaries from other reforms, so these results should certainly make us question a knee-jerk reaction that increasing teacher salaries will raise morale and consequently effort. And the points above on cost-effectiveness should give us pause about the effectiveness of unconditional increases, as opposed to combining those with some sort of restructuring to allow performance to play a role.

Wow, fascinating study. Any inside info on whether the authors intend to conduct a follow-up study on the extensive margin effects? Seems like it should be possible, though perhaps not powered to detect small enough effects.

"We care about teachers, but we also have to pay attention to the needs of students". That's it in a nutshell. There are factors that have a greater influence student achievement than teachers (Hattie, Thompson, Bourdieu, etc.). Ideally teachers should be paid well and have access to professional development training if we want them to perform well - as is the case for any other profession - and there should be a greater focus on the factors that we know are having a higher detrimental impact on student outcomes than teachers. I see the merits of performance-based pay but teachers cannot be held responsible for aspects of their students’ lives which are impacting their learning outcomes and completely beyond their control...

This is a nice and informative, containing all information and also has a great impact on the new technology. Thanks for sharing it