4 Years On, Looking Back at OpenStreetMap Response to the Haiti Earthquake 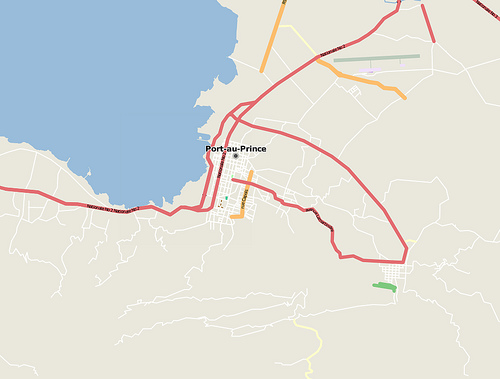 With this week’s launch of the guide to Planning an Open Cities Mapping Project, it is important to return to earlier work that inspired the Open Cities team.

It has now been more than four and a half years since the January 12, 2010 earthquake devastated one of the most vulnerable countries in the Western Hemisphere.  Just before 5pm local time on, a 7.0 magnitude earthquake struck Haiti. The epicenter was near the town of Leogane, about 20 miles west of the capital city Port-au-Prince.  The heavy block and concrete style construction of the capital— intended to withstand hurricane force winds—collapsed and caused massive loss of life and injury. It is now estimated that over 40,000 people died and over 1 million were displaced. As many as 40% of Haiti’s civil servants were injured or killed, and the majority of government buildings were damaged or destroyed.  The World Bank along with donor governments and other international organizations launched one of the largest disaster relief and reconstruction efforts in history.

In the midst of this tragedy, from which the country is still recovering, we also witnessed many tremendous examples of volunteerism and innovation.  The efforts of one community in particular, OpenStreetMap, stand out not only for the impact of their work at the time, but also for the ways in which the things they accomplished irrevocably changed the way mapping for disaster risk management is conducted.

In the days following the earthquake, the World Bank, along with key satellite companies such as Digital Globe, GeoEye, and Spot released high-resolution satellite imagery under open licensing schemes that facilitate wide distribution and use.  The sudden public availability of quality imagery of Haiti catalyzed a worldwide effort to map Haiti.  Over 450 OpenStreetMap volunteers from an estimated 29 countries used the imagery to digitize roads, buildings, and other features, creating the most detailed map of Haiti in existence in just a few weeks.   OpenStreetMap quickly became the de facto basemap for many of the organizations involved in the response and reconstruction.

OpenStreetMap was founded in the United Kingdom in 2004 by software developers frustrated with usage limitations in place on Google Maps and government data from the country’s national mapping agency.   By 2010 it had grown to a global community with hundreds of thousands of members.  The idea of using OSM in disaster response had been explored but this was the first time that the community mobilized in such and organized and large-scale manner.

In March of 2010, a new organization called the Humanitarian OpenStreetMap Team (HOT) traveled to Port au Prince to further embed OSM within the response and reconstruction efforts and contribute to the growth of a local mapping community in Haiti.  With the support of a wide range of organizations including the World Bank, the International Organization for Migration (IOM), the United States Agency for International Development (USAID), and the American Red Cross (ARC), HOT has continued to partner with the Haitian OSM community to create open spatial data that is critical to informing development activity in the country.

In the years since the Haiti earthquake, HOT and the World Bank have partnered to bring the advantages of open, community mapping projects to the challenges of building resilience to natural disasters and the impacts of climate change in many other countries, including Indonesia, the Philippines, and Malawi.  HOT is a key partner in the Open Cities project, having co-authored the Open Cities guide and directly supported mapping activities in Sri Lanka and Bangladesh.  The value of OpenStreetMap as a collaborative and open-data platform to disaster risk management was first demonstrated in Haiti.  Since then the community of organizations and individuals working in this space has grown tremendously and achieved incredible things.  Reflecting on the origins of this work and what we have learned along the way will be a critical part of planning the future of the Open Cities project.
Topics
Disaster Risk Management
Countries
Haiti
Regions
Latin America & Caribbean