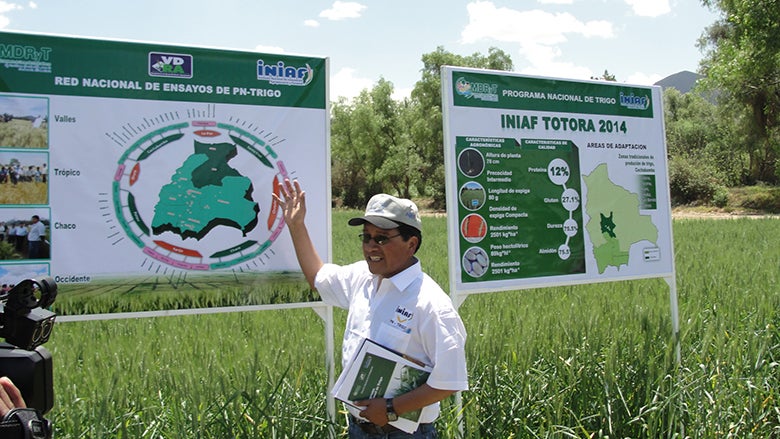 “Don’t waste your time in local breeding programs if someone else can improve the seed for you. We are a small country and cannot afford to reinvent the wheel”. This was the pragmatic advice of a Bhutanese agro-scientist visiting Bolivia a few years ago. His statement might be true, especially in resource-limited countries. However, I strongly believe that implementing agricultural innovations requires bridging the global with the local in a two-way partnership, with strong capabilities in the field. Here's a good example.

For decades the Consultative Group for International Agricultural Research (CGIAR) centers have developed and delivered technology so that the global food system can feed people around the world. CGIAR’s work to improve crop varieties and crop management technologies will continue to be important—especially as the population is projected to exceed 9 billion by 2050, and farmers seek to boost yields and profits in the face of climate change. And their partnerships with thousands of local institutions that test and validate technologies, including in farmers’ fields, are crucial. If partners fail to do their job, even the best technology runs the risk of becoming useless. The CGIAR centers also rely on partners to improve crops  based on high quality information  from the field. It is a virtuous circle. (see Box on collaboration with CGIAR). Bolivia’s National Institute for Innovation in Agriculture and Forestry (INIAF) is one of many institutions that partners with CGIAR centers. Since 2012, INIAF has worked with CGIAR to develop wheat production technology, in an agricultural innovation project funded by the World Bank and the Danish and Swiss Cooperation Agencies. The collaboration on wheat production has been especially effective. In my estimation, there are two key elements behind the success:

Collaborate to maximize capacity: INIAF has been able to pioneer an inclusive research model that harnesses the capacities of many actors to address national priorities in wheat research. Investing in wheat research makes sense in Bolivia, a country in which yields of this important staple are among the lowest in the region and in most years over 200,000 tons of wheat are imported to meet domestic demand. The INIAF Wheat Program works closely with the private sector, as exemplified by its partnership with the National Association of Oilseeds Producers (ANAPO), as well as with civil society, notably the Foundation for Research on Andean Products (PROINPA). It also collaborates with subnational governments, public and private universities, producer organizations, and individual farmers. In a world where technological change happens very quickly and emanates from many different sources, working through collaborative partnerships—particularly with the private sector—is indispensable to generating, spreading, and adopting innovations.

Test innovations aggressively, act quickly and share scientific knowledge: INIAF has taken advantage of its partnership with the CGIAR to achieve impressive results quickly. A cornerstone of the INIAF Wheat Program has been the partnership with the Mexico-based International Maize and Wheat Improvement Center (CIMMYT), a member of the CGIAR. Over the past four years, INIAF has tested approximately 10,000 genetic lines made available by CIMMYT and assessed their adaptability to different production environments throughout the country. CIMMYT has participated in the research process and provided opportunities for INIAF researchers to interact with scientific experts from all over the world.

Using genetic material made available by CIMMYT, and taking into account the information gathered through dozens of trials carried out throughout the country, INIAF is now able to provide the Bolivian wheat industry with improved crop varieties. Four new wheat varieties have been released, which farmers are starting to adopt given that many of them engaged in the research activities. Under rather conservative assumptions, it is projected that over the next five years those varieties will generate US$ 7 million in incremental production value, more than three times the cost of the INIAF Wheat Research Program (see infographics). And these four varieties are only the beginning. INIAF wheat breeders have made good progress in developing drought-resistant varieties that can cope with climate change and biofortified varieties that can improve the nutrition of the poor, which are likely to hit the market soon.

Today, INIAF is recognized as a capable and reliable partner, and CIMMYT is eager to raise the bar another notch. Recently CIMMYT invited the INIAF Wheat Program to join an international research network that is working to combat pyricularia, a disease that is wreaking havoc on worldwide wheat production. INIAF has started testing materials that appear resistant to this disease, and if the resistance is confirmed, the materials will be introduced into commercial varieties not only in Bolivia but also in distant countries such as Bangladesh.
Thanks to the sustained efforts of the Bolivian researchers, INIAF today is able to join forces with one of the world’s leading agricultural research centers to build a global food system with the capacity to feed everyone, everywhere, all the time.

After all, local breeding programs are not a bad idea. 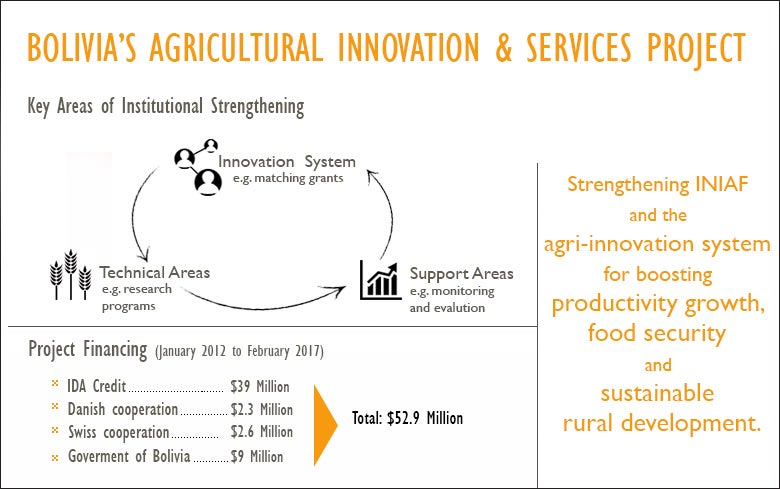 With rapid growth in population, the world definitely needs to grow more food relative to population growth. This will never be possible without collaborative research programs. We can only grow more food with improved seeds and a more sustainable agriculture.These all together were research driven.Research has been capital intensive and technology based,but with collaboration the outcome will be a positive one.

Francisco - this is a great example from the coal face of how international public good research of CGIAR and partners becomes translated into the national context by national institutions, farmers and the private sector. Many thanks for sharing the experience and results. Would be really useful to capture more of these from the field in other countries and WB programs.