Although women can be violent in relationships with men, and violence is found in same-sex partnerships, the overwhelming burden of this violence is borne by women at the hands of men. Globally, the most common form of men’s violence against women is intimate partner violence.

A recent systematic review and re-analysis of data by the Pan-American Health Organization (PAHO) shows that, contrary to popular belief, women in the Andean region report having experienced more intimate partner violence than women in Central America. 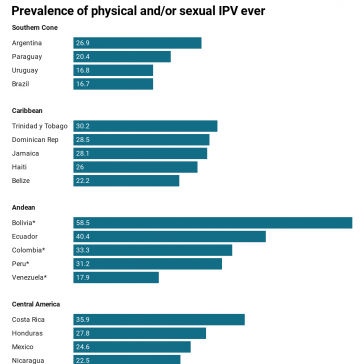 In Bolivia and Colombia—two countries with the highest prevalence of physical and/or sexual IPV—48% and 61% of women respectively report that children in their home are punished through hitting, beating, slapping or spanking. This has lasting consequences on mental and physical health.

In almost every Latin America and the Caribbean country with nationally representative survey data, more than 40% of children experienced violent discipline in the past month, and this is usually higher for boys.

The evidence base showing what works to prevent and respond to this type of violence is fragmented in Latin America and the Caribbean, and especially scant in Andean countries.

A 2014 systematic review of reviews of the evidence found that the region account for less than 2% of rigorously evaluated interventions targeting the reduction of violence against women. This means that the current state of evidence on the topic for the region is not only inadequate overall, but it is lacking in one of the regions that needs it the most.

However, the growing body of rigorously evaluated interventions in other contexts makes it clear that it is possible to prevent violence against women and girls. Well-integrated approaches that engage with multiple stakeholders and sectors over sustained periods of time show the most positive results. Interventions that engage women and men of different ages and backgrounds and use multiple approaches as part of the same intervention can lead to measurable reductions in violence. Various modalities of home visitation programs and health worker outreach to women at risk of violence, have proven effective in reducing victimization in high-income context and these could be adapted, tested and piloted in the region.

Evidence-based research and pilot interventions funded by the Development Marketplace: Innovations to Address Gender-Based Violence show promise. In Peru, Universidad Peruana Cayetano Heredia pioneered a new violence-prevention approach by creating and implementing the program Men Renounce Violence (in Spanish), which led the Ministry of Women and Vulnerable Populations to involve men in gender-based violence prevention programming, and has informed trainings and policy. Today, the program is part of the services offered by the Municipality of Lima.

In Colombia, a medium- and long-term impact evaluation is underway studying the Adolescent Mothers Program of the Juanfe Foundation. The program, called 360 Degrees, covers physical, emotional, psychological health, and education, and aims to provide comprehensive support for adolescent mothers at risk of being victims of violence.

And in Honduras, YTH and the Public Health Institute’s GOJoven International Program and GOJoven Honduras are aiming to reduce teenage dating violence. They are studying the impact of a mobile app and WhatsApp messaging campaign called ZonaSegura that aim to reduce dating violence through providing prevention information, healthy relationship education, and links to teen dating violence services and resources.

Across the region and globally, one of the most tested areas of interventions is in economic empowerment. Supported by the Development Marketplace: Innovations to Address Gender-based Violence, the International Food Policy Research Institute (IFPRI) assessed the effectiveness of a program to provide cash or food transfers to poor rural women in Bangladesh combined with nutrition behavior change communication. Results of the study indicated that this combination reduced intimate partner violence by 26 % compared to the control group or transfer-only group at 6-10 months after the program. A similar program in Ecuador that combined cash, vouchers and food transfers with nutrition training reduced women’s experience of controlling behaviors, physical and/or sexual violence by intimate partners by 19-30 %.

More attention needs to be given to identifying approaches that tackle underlying gender inequalities and the attitudes that condone violence.  That is why the Latin America and the Caribbean Gender Innovation Lab is seeking to shed light on the role that social norms play in perpetuating the existing gender gaps and hierarchies and to promote tools and instruments that can drive change. This is necessary and urgent work to provide policymakers with knowledge to promote gender equality and drive change in the region.