In Latin America, Hard Hats and Tools are no longer only for Men 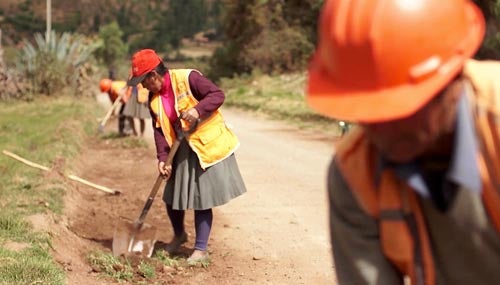 While driving around rural areas of Puno in Peru, Caaguazú in Paraguay or Granada in Nicaragua, do not be surprised to see women lifting rocks from the roads and using shovels and picks alongside men.  In fact, in the past 15 years, the number of women that have joined organizations in charge of routine road maintenance in Latin America has increased significantly and with this their life conditions have improved dramatically.

The reality is that, like in other developing regions of the world, women living in rural areas have limited access to economic opportunities and decision making processes when compared to men.  This is due to lower levels of education and a more traditional vision of the gender roles than in the urban areas. In fact, rural women are often confined to reproduction, caregiving and household up keeping. In addition to these responsibilities, some women also work in their family plot for which they are not remunerated; making them economically dependent on their spouse.  Promoting the creation of income-generating activities for rural women is, therefore, important to not only ensure their economic independence, but also to empower them to exercise their voice and agency.

Infrastructure projects have played a key role by, contributing to the creation of job opportunities for women on “traditional male jobs” such as road improvement and maintenance.

The World Bank has been a pioneer in promoting the inclusion of women in infrastructure projects, particularly in the transport sector, with the Second Rural Road Project  (2001 to 2007) and the Decentralized Rural Transport Project  (2007 to 2013) both in Peru.  These projects have helped to break gender barriers by promoting women’s participation in routine maintenance microenterprises. Also, with the Road Maintenance Project in Paraguay, six microenterprises for routine maintenance were organized and six more microenterprises are being created before the end of the project in June 2015.

The success of these actions has caught the attention of transport practitioners not only in Latin America, but also in other regions of the world such as Europe and Central Asia, who are considering promoting the participation of women on road improvement and maintenance jobs.

How women were integrated in the road work force?  The projects pursued the following steps:

1. Include specific activities to incorporate women at different levels. On these projects, a gender quota was introduced, informational sessions in the communities to recruit women were organized, and training modules on gender equality for both women and men micro-entrepreneurs and for employees of the implementing agency were developed. These actions have proven to be effective since 28 percent of micro-entrepreneurs in Peru are women.
In the Road Maintenance Project in Paraguay, instead of a gender quota women were recruited through an affirmative action approach. The methodology was very successful, resulting in a 29 percent participation of women in microenterprises.

2. Provide opportunities outside traditional roles.  The project ensured that women were not performing “traditional female tasks” such as serving food and water to their male colleagues. Instead women were trained to perform the same civil works tasks than men.  In that sense, women are filling potholes, clearing vegetation, cleaning drainages, removing small obstacles and doing general emergency work.

3. Offer remunerated employment opportunities to both women and men.  Through these projects, women were, for the first time, being paid for these kinds of tasks and are working at par with men.  As reported by the micro-entrepreneurs, women use this income on their children’s education, their families’ nutrition and health, and the improvement of their houses.

These projects not only improve the quality of life of the women participating in the microenterprises, but they also have impact on the results of the programs.  According to interviews and testimonies, the performance of microenterprises is perceived as having increased with the inclusion of female members since women, as their male counterparts noted, are detail-oriented and have good work ethics – they arrive on time and do not miss work. Under this environment, men are encouraged to be more responsible; therefore, their performance and the overall performance of the microenterprises have increased as well.

Next steps: The Global Practice for Transport and ICT is currently carrying out a research in Argentina, Nicaragua and Peru, financed by the Umbrella Facility for Gender Equality, on the impact of these types of jobs on women’s agency with the objective of expanding data and evidence on the importance of these actions for gender equality and to analyze the replicable and scalable nature of those activities across infrastructure sectors, especially transport.

This is particularly important because, as the World Development Report 2012 states, gender equality and economic development are inextricably linked, and investing on women’s well-being and promoting their voice and agency are conditions to reach the Bank’s goals of eradicating extreme poverty and boosting shared prosperity. Definitely consider that that you said. Your favorite reason seemed to be at the
internet the easiest factor to be mindful of. I say to you, I certainly get irked while folks consider issues that they plainly
do not recognize about. You controlled to hit the nail upon the highest and also defined out the entire
thing with no need side effect , folks could take a signal.
Will probably be back to get more. Thanks

I a very interested in speaking with Maria Margarita Nunez regarding her vast experience managing the World Bank's Peru Rural Roads Program.
I am at the Chemonics Home Office in DC. My phone is 208-880-0858, email is [email protected]
thanks
Scott Short