The destinies of people in the Middle East and North Africa (MENA) are shaped more by accidents of where they were born than in any other part of the world (Figure 1). This is considered a problem by governments in the region, and it should be. They have tried many ways to respond to the needs of people in lagging areas; much money has been spent on investment in these places. Thus, to add jobs in poorer areas, policymakers have tried to strong-arm new production facilities into these areas. To meet the need for decent homes and amenities in poor urban neighborhoods, money has been poured into massive housing projects.

Even so, spatial disparities continue to grow, or are closing more slowly than would be expected given the volume of investment directed to these locations. The main reason: the causes of spatial exclusion are not locational and physical but are economic and institutional.

Figure 1: With a few exceptions such as Jordan, spatial inequality is higher in MENA 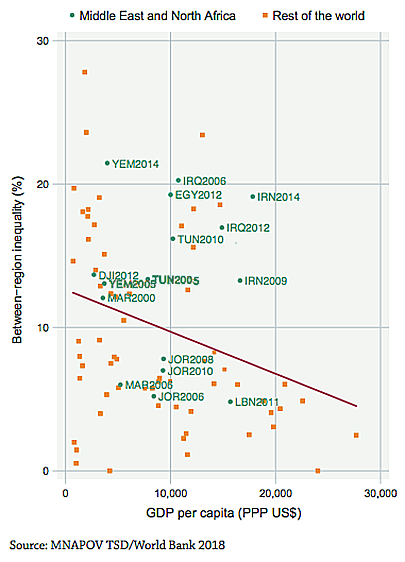 Why Is MENA so Fragmented?

Why is territorial convergence so difficult? In a report that we just completed at the World Bank, we identified four reasons.

Most lagging areas in MENA have not been able to leverage the full returns to their endowments because the business environment and infrastructure in their cities and towns makes it hard for new firms to start and grow  (Figure 2). One reason is that outside the capital city in MENA countries, smaller cities invariably lack the authority to raise their own revenues and to manage local service provision.

Most residents in lagging areas are “stuck in place,” unable to take full advantage of jobs that more vibrant urban economies offer. Credentialist education systems may be most to blame for making people immobile.

MENA’s governments have created formidable obstacles to trade and migration. The main barriers are limits on news and information and practical constraints on travel and trade (visa difficulties, weak infrastructure, logistics hurdles). 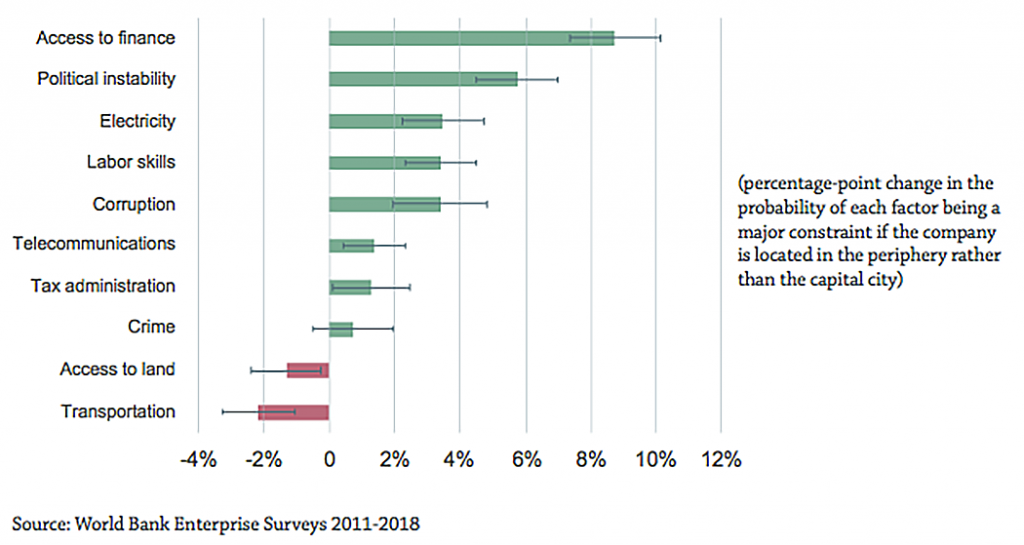 Notice that while they result in spatial inequalities of opportunity, the reasons for fragmentation are not themselves spatial.

Increasing the pace of integration and convergence will require fixing these problems. Governments in the region can reduce territorial disparities quickly and effectively by doing five things:

In other words, MENA’s governments have to start putting together a modern convergence machine. The main parts of the machine are institutions that integrate and infrastructure that connects. MENA is no longer a poor place: Last year, the region’s GDP per capita was nearly $7,000 placing it comfortably in upper middle-income levels.  Its people should have access to quality basic services such as education, clinics, sanitation, and public security. Well-chosen infrastructure initiatives—roads, railways, ports and communication facilities—can provide its entrepreneurs access to the region’s sizeable markets (the region’s GDP is $3 trillion) and even bigger nearby markets to MENA’s north and east. Spatially targeted interventions might also be needed, but they are not the main components of the machine.

Perhaps the biggest mistake that governments have been making is to regard these interventions—programs to push economic activity into lagging areas while simultaneously favoring capital cities—as the mainstay of the machine. It’s time to stop these self-defeating measures that exacerbate fragmentation in MENA and speed up efforts to engineer integration. I enjoyed your article and agree with your point,s however, I think there is one other huge factor - health/ health system strengthening. With the huge shift in disease prevalence/burden and emergence of NCDs and trauma and the need for safe surgical care, UHC/HSS (access to safe high quality UHC) must be addressed in order for the MENA region to sustainably grow.

Thank you for your message. That's a great point. Under transitional step one we advocate for the provision of the range of services and infrastructure needed for citizens to have good qualities of life and for economic agents to grow. This includes health services. We touch on health services lightly in the section that discusses the possible need for alternative delivery models to reach all.

There is also a very important dimension (at least in Morocco): the cultural dimension. We have many different regional cultures and ethnicities. People tend to remain in the same "tribe" where they have support and can be successful. If they move, it will be to the economical capital (Casablanca) to their already established community there.