The April 2022 update to the newly launched Poverty and Inequality Platform (PIP) presents new global poverty estimates for 2018 and revises previously published estimates, as a result of newly available survey data and several changes to the underlying data (see this document for more details).

The global poverty rate (at the US$1.90 poverty line) in 2018 is 8.6 percent, down from 9.1 in 2017, equivalent to a decline by 28 million poor people between the two years.  This confirms a continued reduction in extreme poverty at the global level, although at a slower pace in more recent years, as previously noted. In fact, global poverty fell by 2.8 percentage points between 2012 and 2015 (from 12.9 percent to 10.1 percent), and by 1.5 percentage points between 2015 and 2018. We are able to publish the new global estimate for 2018 due to new surveys added with this update which improve data coverage for low- and lower-middle-income countries (up from 48.5 to 50.7 percent).

All regions show continued progress in poverty reduction except for the Middle East and North Africa, where fragile and conflict-affected countries drive an increase in poverty in more recent years, up to 7.1 percent in 2018. It should be noted, however, that survey data for these countries is limited in recent years, giving rise to considerable uncertainty, and data coverage is insufficient to publish a 2019 regional poverty estimate. In contrast, and thanks to improvements in data availability in West Africa, we can now add poverty estimates for Sub-Saharan Africa in 2019  (see Figure 1, where Sub-Saharan Africa is further divided into East and West Africa). Data improvements for the region are not limited to more recent years. New surveys for Nigeria for 2010/11, 2012/13, and 2015/16 improve data coverage in the mid-2010s so that we are able to publish a full series for West Africa since the late-2000s (compare Figure 1 to the same figure published with the March 2021 update). The same is not true for East Africa, where survey coverage in 2019 is insufficient (largely due to the absence of new survey data for countries such as Ethiopia, Kenya, and Zambia). Estimates for Sub-Saharan Africa continue to show a decrease in the poverty headcount rate (from 38.9 to 38.3 between 2018 and 2019), but an increase in the number of people living in poverty , up from 420 million in 2018 to 424 million in 2019.

The regional poverty estimates included with this update stop in 2019, before the start of the COVID-19 pandemic (the latest nowcasts to 2021 are available here). However, the update includes several country-level estimates for 2020, mostly in Latin America and the Caribbean. Evidence emerging from the implementation of these surveys shows that the pandemic has not only had an impact on poverty, but also on data collection methods and on the methodology used to construct the household welfare aggregate needed for poverty measurement. Section 2 in this document discusses in detail how these changes affect the 2020 poverty estimates and their comparability with those from previous surveys.[1]

Compared to the previously published numbers, the global extreme poverty rate for 2017 is revised slightly downward, from 9.3 percent to 9.1 percent (which corresponds to 685 million people in poverty). This revision is largely driven by Sub-Saharan Africa, whose poverty rate is revised downward from 41.2 to 40.0 percent with the number of extreme poor changing from 433 (March 2021 vintage) to 420 million, and, more specifically, in the Western Africa poverty rate, which has been revised from 36.7 percent to 33.2 percent. This change is due to newly available surveys for ten countries in the West African Economic and Monetary Union (see section 3 here as well as new surveys for Nigeria (see section 4 here). The other regional estimates for 2017 remain largely unchanged compared to those published in the previous vintage.

Regional poverty estimates for 2018 are also largely in line with those published in March 2021, with the exception of Sub-Saharan Africa showing a similar downward revision as the one observed for 2017, and Latin America and the Caribbean showing a slight increase in the poverty headcount rate at all poverty line (see Table 1). The latter is due to revisions to the household welfare measure used for poverty monitoring in some countries in the region, e.g., Mexico and Brazil (see section 5 in this document for country-specific documentation). 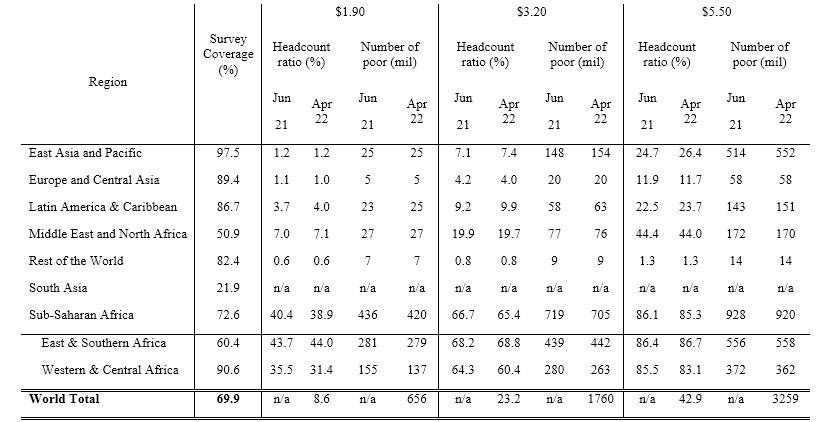 Source: PIP
Note: Data coverage for Low- and lower-middle-income countries is 50.7 % in 2018. The data available at the time of the April 2022 update do not offer sufficient population coverage in 2018 for South Asia, so we are unable to publish regional poverty estimates for this region. Survey coverage is assessed within a three-year window on either side of 2017, i.e., including surveys that were conducted between 2014 and 2020 (also see Castaneda et al., 2020). The estimate for South Asia is not displayed since this region has a survey coverage of less than 50%. Sub-Saharan Africa is further divided into East and West Africa, following the World Bank’s regional definition.