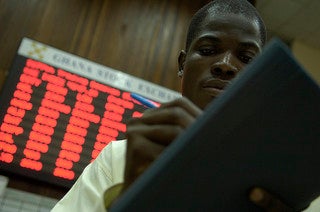 Access to finance, availability of credit, and cost of service are all key to financial development.  Credit finances production, consumption, and capital formation, which in turn lead to economic activity. The availability of credit to households, private companies, and public entities shows the worldwide growth of the banking and financial sector.

In this Q&A blog post, we examine domestic credit data trends as compiled in the World Development Indicators 2014, and what the data reveal about the changing financial landscape in developing countries.

Q: What is the new credit indicator you've added in the WDI database and how is it different from the other two?
A: This year we've added a new indicator: domestic credit to the private sector by banks. This indicator captures the resources that domestic banks provide to private firms. The data complements the overall domestic credit provided by the financial sector (% of GDP) and domestic credit to the private sector (% of GDP) indicators.  However, for developing economies that are still at an early stage of financial development, the credit data by banks are almost the same as the data for total private credit. This is because banks are the dominant component of the financial sector, especially in places where there's a nascent or still-in-the-works stock market.  On the other hand, financial deepening (the expansion of financial services) and the corresponding changes in financial landscapes have changed this scenario in a growing number of countries, such as Thailand, Indonesia, Bolivia, Mexico, and Romania.  As a result, private credit provided by other financial institutions is increasing.

Q: Is there one country where the data for domestic credit to the private sector by banks data was particularly informative?
A: Thailand's data exemplifies the changing financial landscape that is taking place there and in other developing countries in recent years.  It's a country where the total amount of credit provided by the financial sector was about 170% of GDP in 2012, with the amount provided to the private sector about 148% of GDP. Credit by banks to the private sector, though, was about 116% of GDP—a more than 30% gap, illustrating the recent rapid development of other financial institutions, such as credit card companies, leasing establishments, and personal finance enterprises.

Q: Where can I go to see more data on domestic credit?
Below are the indicators we used in this blog post, along with their codes.  You may also browse the World Development Indicators (WDI) 2014, or go directly to the WDI online tables 5.1 and 5.5 to view these data.