How much should governments spend on data?

Some years ago, researchers documented that marathon finishing times follow a special pattern. Many runners finish just ahead of 3:30 hours, 4:00 hours, and other 30-minute thresholds while few people finish just after those thresholds. There is no physiological reason to believe that runners are much more capable of finishing 42.2 kilometers in three hours and fifty-nine minutes than in four hours and one minute. Nonetheless, the reason for the observed pattern is obvious. Individuals set targets for themselves and such targets influence their behavior. 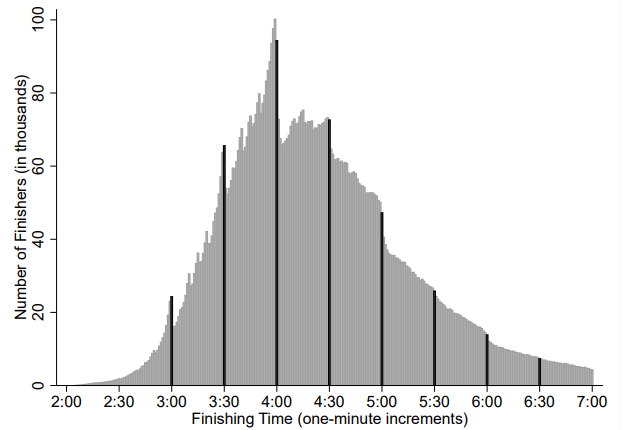 Note: The dark bars highlight the density in the minute bin just prior to each 30-minute threshold.
Source: Allen et el. (2004)

Individuals are not alone in setting and being influenced by targets. Countries too set targets in various domains and change their policies in response to these targets. Denmark, for example, has in recent years disbursed just above 0.70% of its Gross National Income as Official Development Assistance (ODA). Not coincidentally, this is precisely the decades-long target that rich countries should devote to ODA.

Because of this relationship between targets and actions, international cooperation is anchored in targets. This is most evident in 169 targets associated with 17 Sustainable Development Goals (SDGs) – the most ambitious agenda ever laid out for the welfare of our planet. In addition to the SDG targets, several international targets exist regarding the allocation of government resources. To name a few examples, the Education 2030 Framework for Action urges countries to allocate at least four to six percent of GDP and/or at least 15 to 20 percent of total public expenditure to education, while the Abuja Declaration urges countries to spend at least 15 percent of their annual budget to improve the health sector. The Addis Ababa Action Agenda on Financing for Development encourages countries to set “nationally appropriate spending targets for quality investments in essential public services for all, including health, education, energy, water and sanitation, consistent with national sustainable development strategies.”

Such spending targets are leveraged by sector specialists during their budget negotiations and can nudge governments to prioritize funding for areas in need of resources. Conversely, domains with no spending targets might have a harder time convincing the Ministry of Finance of their budgetary importance. Spending on data is a good case in point. The 2021 World Development Report: Data for Better Lives, makes the case that government data can have a transformational impact on individuals’ lives and yet that funding is lacking for foundational data products, tools, and analysis. Decision makers in budget offices may not fully understand how much funding is needed to produce high-quality data or may lack the incentives to prioritize data investments. One way to increase the priority given to financing of data would be to establish a target for the government expenditure on data, likely as a fraction of GDP or total government expenditure. Unlike in the domain of health and education, no such target currently exists for data.

Several factors complicate creating an international target on data spending. One reason is that there can be great returns to scale in data spending. This means that a populous country is unlikely to need to spend the same fraction of GDP or government expenditure on data than a less populous country. There are returns to scale in other domains as well, but with respect to data, which, unlike schools and hospitals, require less physical infrastructure and government employees, the returns to scale are undoubtedly greater.

A second and more fundamental reason why creating a public expenditure target is difficult is that unlike in most other domains, spending on data spans several government agencies. This means that figuring out exactly how much countries spend on data is challenging. One way of making this more tractable would be to focus on spending on the national statistical system. A target could be derived with a view towards the resources needed to fully fund the national statistical plan or be based on the spending of peer countries that have achieved sufficient funding. Yet systematic cross-country data on this are incredibly hard to get by. Somewhat ironically, data on government spending on data are painfully hard to obtain, making it hard to create and monitor progress towards spending targets.

Without such data, how can one determine what the target should be? How much should governments spend on data or on the national statistical system more narrowly?

Though data are sparse, we do have some data. Most prominently, through SDG indicator 17.18.3, PARIS21 tracks the number of countries with full funded national statistical plans. In addition, a recent paper by colleagues at the same institution estimates how much it will cost for developing countries to meet three different ambitions for statistical systems. A low ambition scenario finds that it will cost IDA and IBRD countries $2.9 billion USD annually to support the statistical production of measuring the SDGs. A medium ambition scenario finds that it would cost $4.2 billion USD per year to, in addition, fund capacity building activities, and in a high ambition scenario, the annual cost is estimated at $5.6 billion to implement all activities under the Cape Town Global Action Plan for Sustainable Development Data. Separating these figures by IDA and IBRD and expressing them as a share of GDP and government expenditure allows for a rough estimate of what data spending targets could be:

Source: Calleja and Rogerson (2019); World Development Indicators.
Note: Authors’ calculations based on the sources above.

Compared to the health and education targets mentioned above, these figures are small. Yet, the size of the figures should not distract from the size of the challenge of mobilizing such financing either domestically or through ODA. So far, too many countries’ national statistical systems are severely underfunded. For them securing this funding is certainly no walk in the park. Rather, it is a marathon requiring building a culture of data use and tough budget negotiations. Perhaps the availability of spending targets can get some countries over the finish line a little bit faster.

Read more about Chapter 2 of the report here. The government's own consumption should be minimal; the government's public expenditure: education and health should meet the minimum needs of the society. The expenditure of a democratic government is transparent and subject to social supervision. On the contrary, an authoritarian government is opaque and cannot be supervised; it hides corruption and danger!

Transparent government reveals data of expenditure. However, transparency still does not ensure reduction in corruption to a large extent.

Thank you for the opportunity in participating in the six (6) weeks world bank program on : Data for Better Lives , ..

The low level of funding of data systems and infrastructure is one reason why some developing countries have remained under-developed. Low level funding of data implies poor access to data and insufficient data for development activities