This is the first in a series of posts on data related the Millennium Development Goals based on the 2015 Edition of World Development Indicators. 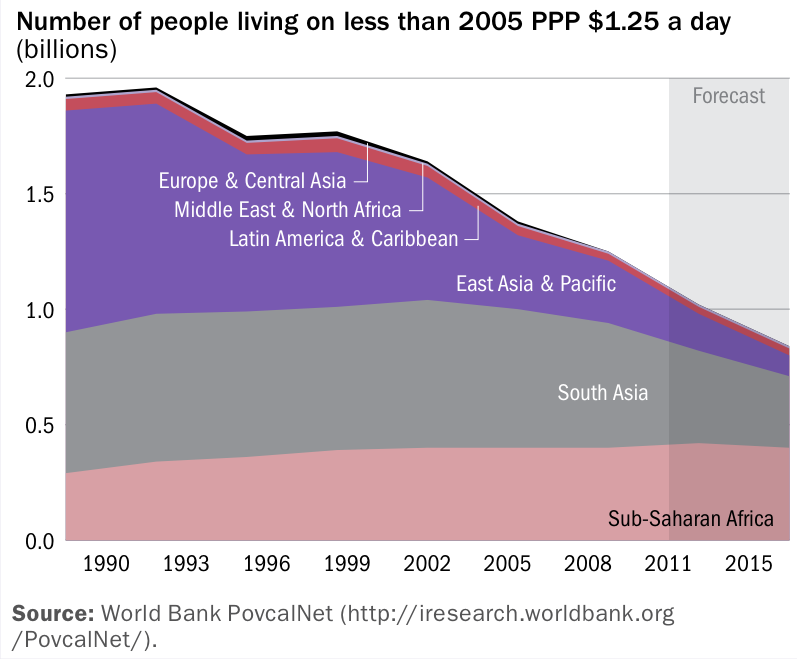 The latest estimates show that the proportion of people living on less than $1.25 a day fell from 43.6 percent in 1990 to 17.0 percent in 2011. Forecasts based on country-specific growth rates in the past 10 years indicate that the extreme poverty rate will fall to 13.4 percent by 2015, a drop of more than two-thirds from the 1990 baseline.

The number of people worldwide living on less than $1.25 a day is also forecast to be halved by 2015 from its 1990 level. Between 1990 and 2011 the number of extremely poor people fell from 1.9 billion to 1 billion, and according to forecasts, another 175 million people will be lifted out of extreme poverty by 2015.

This means that based on current trends, nearly half of developing countries have already achieved the Millennium Development Goal 1 (MDG1) target of halving the proportion of the population in extreme poverty five years ahead of the 2015 deadline.

Half of countries will meet the poverty target, but 20 percent are seriously off track 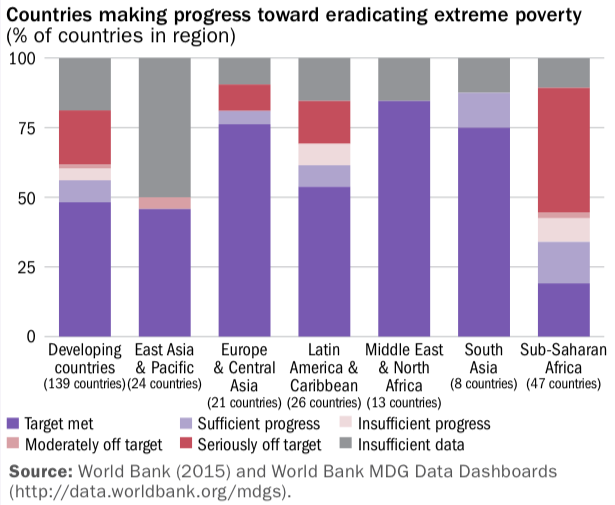 However, despite the remarkable achievement in developing countries as a whole, progress in reducing poverty has been uneven across regions and 20 percent of countries are seriously off track. This means that at the current pace of progress they will not be able to halve their 1990 extreme poverty rates even by 2030.

A large proportion of countries classified as International Development Association–eligible and defined by the World Bank as being in fragile and conflict situations are also among those seriously off track.

Regional disparities in progress towards the hunger and malnutrition targets 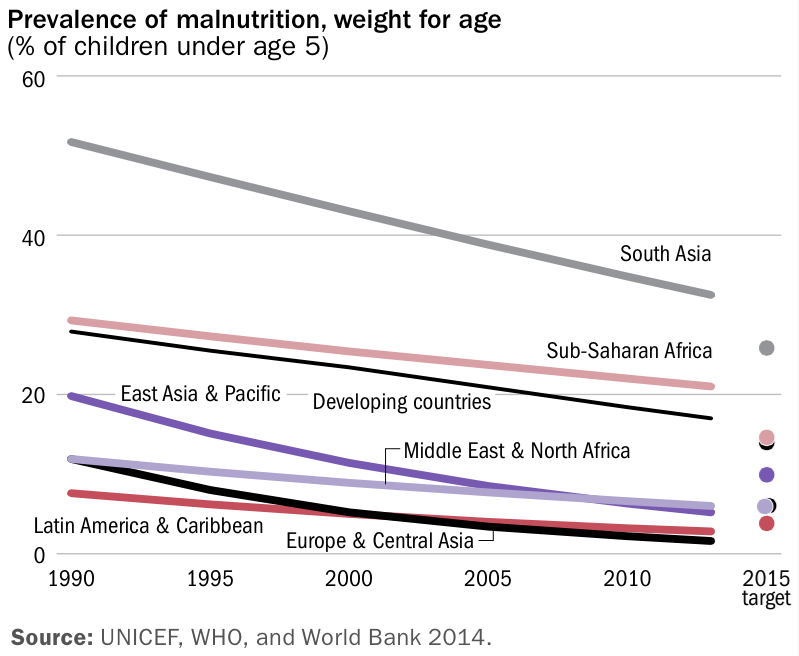 MDG 1 also addresses hunger and malnutrition. On average, developing countries saw the prevalence of undernourishment drop from 24 percent in 1990–92 to 13 percent in 2012–14. The decline has been steady in most developing country regions in the past decade, although the situation appears to have worsened in the Middle East and North Africa, albeit from a low base. The 2013 estimates show that East Asia and Pacific and Latin America and the Caribbean have met the target of halving the prevalence of undernourishment from its 1990 level by 2012–14.

By crude linear growth prediction, developing countries as a whole will meet the undernourishment target by 2015, whereas the Middle East and North Africa, South Asia, and Sub-Saharan Africa likely will not.

Another measure of hunger is the prevalence of underweight children (child malnutrition). Prevalence of malnutrition in developing countries has dropped substantially, from 28 percent of children under age 5 in 1990 to 17 percent in 2013. Despite considerable progress, in 2013 South Asia still had the highest prevalence, 32 percent. By 2013 East Asia and Pacific, Europe and Central Asia, and Latin America and the Caribbean met the target of halving the prevalence of underweight children under age 5 from its 1990 level. The Middle East and North Africa is predicted to be on track to meet the target by 2015. However, developing countries as a whole may not be able to meet the target by 2015, nor will South Asia or Sub-Saharan Africa.
Regions
The World Region It is time that world bank start working with a more ambitious yardstick of poverty, such as $2-a-day and even $3-a-day simultaneously. Shortage of funds can't be the reason for not doing that, looking at the defence spendings of World Bank's donor countries. In the 21st century world $1.25-a-day doesn't make much sense.

1st to eradicate illiteracy from the world