The new website for the World Bank’s Multidimensional Poverty Measure

Poverty has many dimensions that go beyond monetary measures of consumption or income. Multidimensional poverty measures, such as the Global MPI produced by UNDP and OPHI, try to take into account these multiple facets of poverty. Similarly, the World Bank’s Multidimensional Poverty Measure (MPM) seeks to understand poverty beyond monetary deprivations (which remain the focal point of the World Bank’s monitoring of global poverty) by including access to education and basic infrastructure along with the monetary headcount ratio at the US$1.90 international poverty line.

This blog introduces a new interactive website that presents the latest data on the World Bank’s MPM: 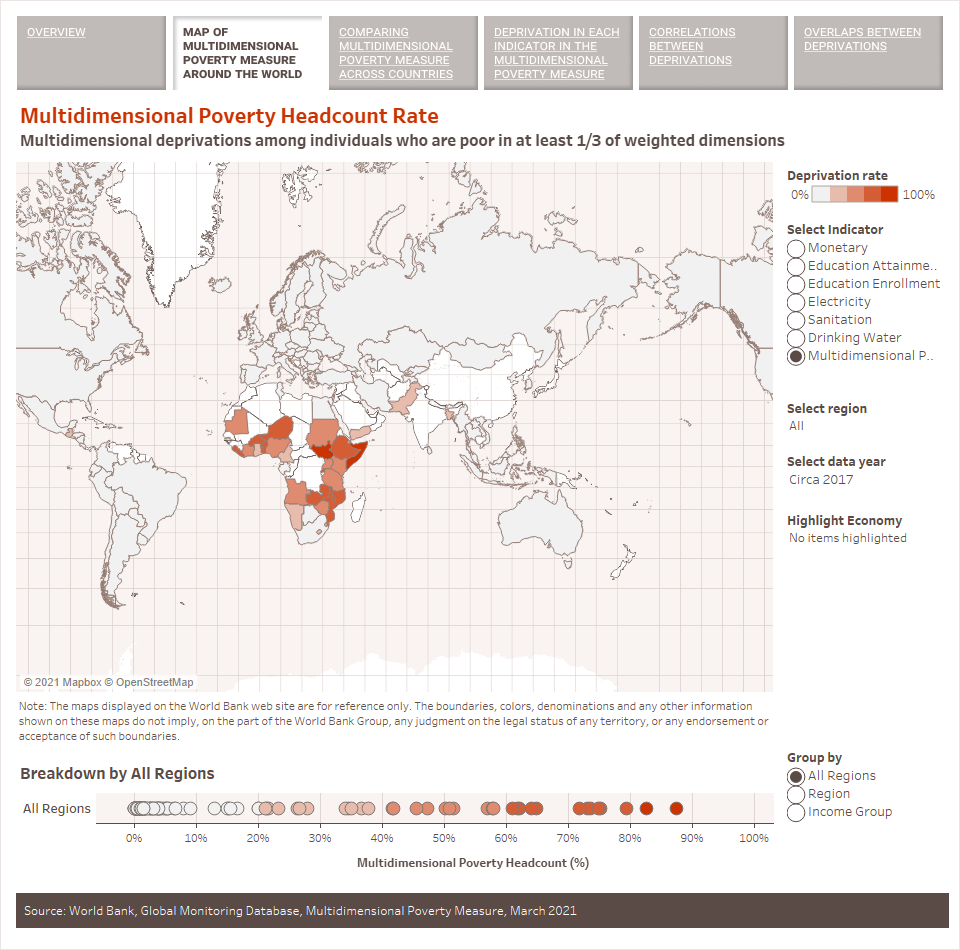 The MPM estimates are reported for a circa 2017 reference year, i.e., including survey data between 2014 and 2019. This is the last year for which sufficient coverage of the world’s population is available.[1] This is the first revision for the circa 2017 estimates, which were published in the Poverty and Shared Prosperity Report 2020. Differences between the two versions are explained by the release of more recent survey data for countries already in the MPM database and by the addition of 9 new economies (including 4 new economies from Sub-Saharan Africa), bringing the total number of economies in the dataset to 124.[2]

The aggregate MPM estimates are in line with those reported in previous editions. The share of people living in multidimensional poverty is about a third higher than those living in monetary poverty. While this shows that the two definitions are highly correlated, it points to important additional deprivations resulting from lack of access to infrastructure and education. A global map of multidimensional poverty across countries is available here, and a country ranking is available in this bar chart. Deprivations can be shown separately by dimension, and this figure shows which indicators are driving each deprivation.

As we reported previously, Sub-Saharan Africa experiences the highest levels of multidimensional poverty and the highest overlaps between different dimensions. As shown by the figure below, about 38% of the multidimensional poor are deprived in all three dimensions, compared with 22% in the Middle East and North Africa, and about 16% in Latin America and the Caribbean. The overlaps in the deprivations at the country-level are shown in this interactive graph.

Figure 3. Share of the population living in households deprived in multiple dimensions, selected regions circa 2017 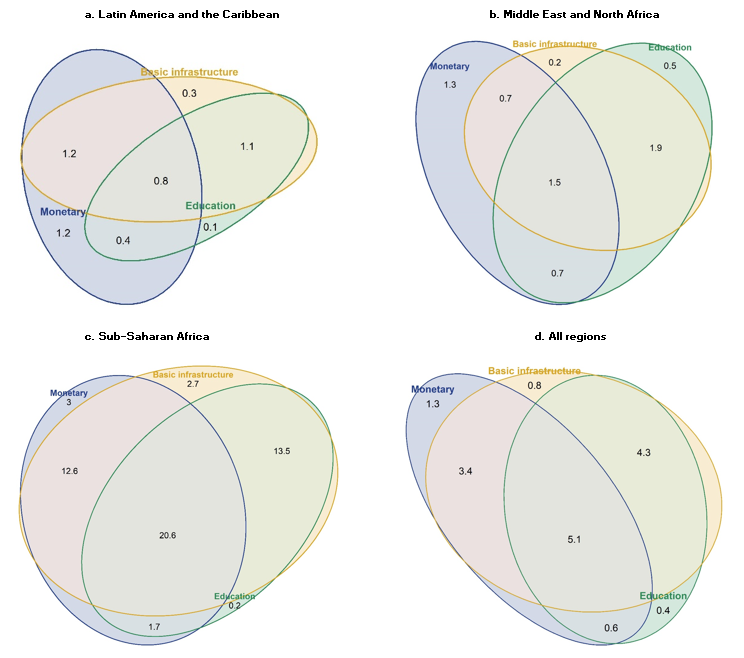 Note: The Venn diagrams show the overlaps in different dimensions of the multidimensional poverty measure at the household level. It shows the share of households (in percent) deprived in all indicators and in each combination of the monetary, education, and basic infrastructure dimensions. Only Latin America and the Caribbean, the Middle East and North Africa, and Sub-Saharan Africa, as well as the total for all regions, are shown because these regions have sufficient population coverage.

[2] The estimates published in the Poverty and Shared Prosperity 2020 report have been corrected due to a mistake in the MPM average for the “All regions” category. More details on this correction can be found here. The report has been updated to reflect these changes. Thank you so much. All nations need reliable data in every aspects of public management.

Multidimensional poverty is mainly distributed in Africa and Asia. The correct way to eradicate poverty is a democratic system + a market economic system!