An Open Data Community That Grows Together, Stays Together

The power of open data to bring together people from different streams of life for civic purposes was on full display around the world on February 22-23, 2014. Washington, D.C. was home to one of the 194 global International Open Data Day events that dotted cities around the world. Data was scraped. Visualizations were made. Code was written. Interfaces were designed. Prototypes were built. Initiatives were born (Here’s looking at you, Code for Nepal!). New friends were made. And a tooth was chipped.

Despite the unseasonably warm weather in Washington, D.C., more than 350 civic hackers, development specialists, coders, designers, and enthusiasts participated in two days of Open Data Day hacking and tutorials at the World Bank. Based on an informal poll (raise your hand, please?!) of all attendees at the beginning of the event, nearly two-thirds of the audience had  never attended an Open Data Day event before. This was an unexpected but welcome surprise and bodes well for the continued growth of the open data community in Washington, DC.

Admittedly, growing numbers are not the end goal of open data efforts, but one cannot deny the energy, enthusiasm, and new approaches that open data has brought to many important civic challenges both locally and internationally. As the expectations around open data and hackathons evolve, reaching the promised land of positive impact in our local communities and the world will require more inclusive and collaborative efforts. What does open data mean to you? Open data may mean different things to different people, but its ability to break down traditional social barriers has been demonstrated time and time again. Carrying the hype, the open data journey (and momentum) continues.

Serendipity- the children are our future

In the inclusive and innovative spirit of open data, there were also impromptu and unexpected gatherings, including a children’s tutorial on “happiness” index data led by Harshil Parikh of TuvaLabs, a platform that uses open data to increase data literacy.

It is clear that the demand for open data and skills to leverage open data are on the rise. And it’s ok to come away from an event like this with more questions than answers.

Like many of life’s celebratory moments (i.e. graduation, a wedding, the birth of a child), Open Data Day marks a joyous beginning, not an end. Progress continues through new and renewed relationships and collaboration on projects, leveraging ongoing communities and meetups like Code for DC.

As expected, given the location, a dynamic array of projects naturally formed around issues touching the immediate locale and more broadly focused on international development. Many groups pushed through the two days on topics of importance and significance: 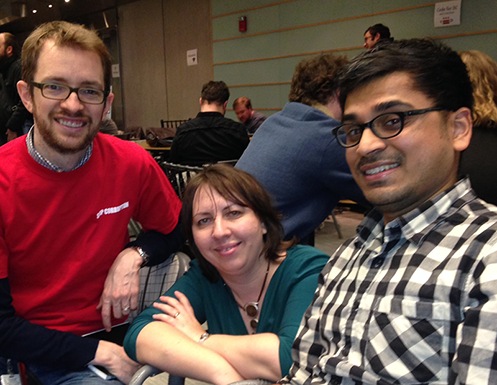 Thanks to all who joined us at the World Bank this year- please share your experience of the event and also any ideas on how this can be improved in 2015! See you next year at Open Data Day DC, and hopefully before then…

World Bank Group Finances is the online access point for IBRD, IDA, and IFC open financial data. The website features datasets that cover loans, contracts, trust funds, investments, and financial statements. A related mobile app, which allows you to “talk” to us more easily about operational and financial data in nine languages, is available for download for Android and iOS smartphone and tablet users at the Google Store and the iTunes Store, respectively. Follow us on Twitter to join and remain engaged in the conversation about the Bank’s open financial data. Good data use of good development in world ... Thanks...

Interesting! Will there be any Open Data events in Europe (Netherlands please) soon?