How can financial service providers move the needle for migrants and their families?

Accounting for more than 12 percent of the GDP, remittances have been very important to Albania for decades. A few weeks back, remittances became a critical aspect of a crisis response. In November 26, 2019, a major earthquake hit Albania causing significant number of casualties and injuries, and leaving thousands homeless. In addition to the humanitarian crisis, its aftermath brought to the limelight the importance of efficient payment systems to enable quick and affordable remittances. As thousands of people were remitting locally or internationally to support the reconstruction efforts, a broad discussion sparked in the social and mainstream media about the costs of remittances and the efficiency of the channels. In response, some Money Transfer Operators (MTOs) zeroed their fees and all banks cancelled their commissions for remittances to government donation accounts. 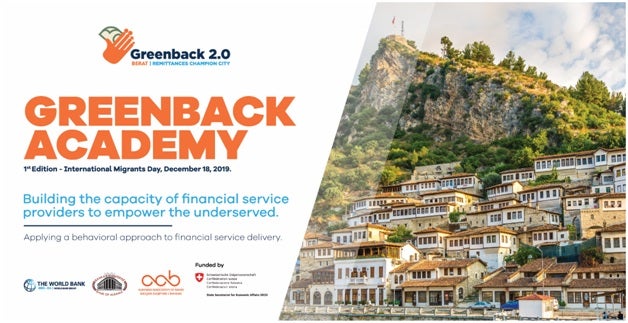 2019 also marked an important year for remittances worldwide, which are poised to grow faster than the global economy (4.7 percent vs. 3.01 percent). Remittances to low and middle income countries exceeded official development assistance (ODA) by a factor of three and are about to exceed foreign direct investment (FDI) for the first time in the past two decades. And as migrants are doing so much for their families back home, what is the financial sector doing to support them in facilitating the process?

Globally, senders and receivers saved up to $145 billion in remittance costs in the past decade

The World Bank has been regularly tracking the price of remittances on a quarterly basis since 2009 for 367 country corridors on the Remittance Prices Worldwide platform. The global average cost of sending remittances has declined by 27 percent in the past eight years, from 9.34 percent in Q3, 2011 to 6.84 percent in Q3, 2019. Despite the progress, current costs exceed the 5 percent target by G20 and the 3 percent SDG target for remittances.

Any reduction in the cost of sending remittances is money saved for migrants and their families. Estimates indicate that in the past decade, these accumulated savings globally amounted to approximately $145 billion.

Access to financial services is also a major barrier to the efficient channeling of remittances, limiting the choice of migrants and their families back home. For instance, undocumented migrants cannot access financial services in the country of destination and in many cases low skilled migrants cannot remit through the accounts they use to receive their salary. Even when the migrant is fully equipped to remit, the receiver in a developing country may be less likely to own an account than his/her relative abroad. 2017 Global Findex data shows that only 63 percent of adults in developing countries own an account at a 31 percentage points less than in high income countries. This gap has significantly declined compared to 2011, when the levels of account ownership in developing countries were less than half of high income countries (42 percent vs. 88 percent).

Beyond affordability and access, efficient channeling and use of remittances is broadly defined by behavioral aspects and social norms. The Learning Needs Assessment for remittance senders and receivers in four countries in Southeast Europe (Albania, Bosnia & Herzegovina, Kosovo and Serbia) and the Project Greenback experience around the world reveals that majority of choices related to remittances depend on individual perceptions, force of habit, and their ability to understand how the financial sector works. As a result, they would incur higher costs and resort to informal channels, stuck in a vicious cycle of lack of information, mistrust, habit and disbelief. Addressing this barrier requires a two-fold intervention – financial education of the end clients paired with capacity building of the supply side, i.e. providers of the financial services.

On December 18, 2019 the World Bank in cooperation with the Bank of Albania (BoA) and the Albanian Association of Banks (AAB) will jointly launch the Greenback Academy in Albania. This initiative marks the beginning of the capacity building component of Project Greenback, implemented by the World Bank in Albania in the context of the Remittances and Payments Program funded by the Swiss Secretariat of Economic Affairs (SECO).

The first workshop will seek to build the capacities of the financial service providers (banks, microfinance institutions, money transfer operations, e-money operators, etc.) to better address the needs of the underserved segments, by applying a behavioral approach to the delivery of financial services. Driven by the belief that to best serve clients you have to think like them, the first workshop will bring together client-facing staff members from all financial institutions in Berat.

This session will mark the beginning of this one of a kind initiative, which ultimately aims to bridge information gaps between the demand (senders and receivers) and the supply side. Considering financial education, a two-way street and an ongoing learning process, engaging financial service providers in the process is very important for shaping the financial behaviors in the long term. The Greenback experience on the ground has indicated that financial service providers are a key source of information for receivers, who then pass on the information to the senders. The lessons learned from the first edition will be applied to a standardized training module that the World Bank is preparing for this purpose. AAB and BoA will then streamline this module into existing training programs for every financial institution in Albania. Director of Payments Systems and Accounting at the Bank of Albania