Globally, women account for about half of all international migrants and about half of the 21 million immigrants from Latin America and the Caribbean in the US are women. In that region women play a central role as a sender/recipients and managers of remittances. Research in Guatemala has shown that 63 per cent of main remittance recipients are women, while in Colombia; they make up 70 per cent of the recipients[1]. In the case of Mexico a recent remittance study showed that women are the main group benefiting from remittances receiving almost three out of four remittances from the US.

The study[2] by the Center for Latin American Monetary Studies (CEMLA, the association of Latin American and Caribbean central banks) tries to introduce new evidence on the topic of women’s remittance sending and recipient behavior and provides an empirical analysis using a 2.9 million remittance transfers operations database from BANORTE, one of the Mexico’s main remittance payer banks. The sample represented one out of every 26 remittances received by Mexico considering that in 2013 Mexican remittances totalled US$21.9 billion, originating from 75 million transfers.

United States is the main destination for Mexican migrants. In 2013 Mexicans migrants accounted for 28 per cent of all immigrants in the United States and constituted the largest immigrant group in that country with more than 11.5 million[3]. Among this all-Mexican migrant, women amounted for 47 per cent. 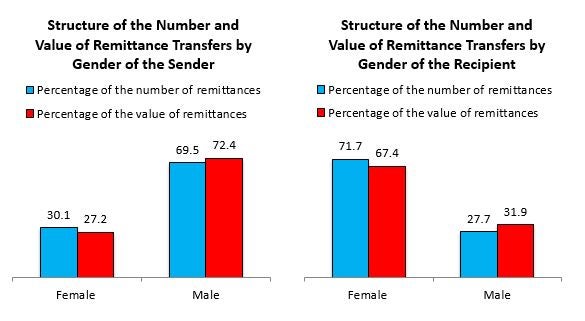 Remittances sent by women are generally for a smaller amount than those sent by men, regardless of the gender of the receiver. Thus, according to the remittances study in 2013 the average remittance sent was 468 US dollars, but totaled 422 US dollars for those sent by women and 488 US dollars for those sent by men. However, one important result of the study is that the percentage of income earned by Mexican immigrant workers in the United States and sent to México in the form of remittances is the same for women and men. It means that although average earning of Mexican female immigrant workers are lower than those of men, their relative effort to send remittances is the same in both male and female.

Other interesting finding refers to financial inclusion and remittances. In this case Mexico doubles the global average of account penetration, measured as percentage of remittances deposited in a bank account. The Global Findex Database of the World Bank showed that in the Latin America and the Caribbean region only 9 percent of all adults reported having used their account to receive remittances in the past 12 months.  CEMLA’s research revealed that the percentage in Mexico totalled 18 per cent. Finally the report revealed that the percentage of remittances deposited in a bank account was higher when they were sent by men rather than by women (19 per cent versus 16 per cent).

After reading this, and juxtaposing it with the current World Bank study we are working on with regard to Sierra Leone Diaspora Investment and Trade opportunities, women can and should be in the middle of it all. Would these numbers be similar to African women? And what does this say with regard to women being willing to invest in their country of ancestry from the diaspora?

I did a study on remittance sending behavior by African women living in South Australia. What I learnt is that African women do remit. On Average skilled women, those who had migrated to Australia on professional basis were remitting close to 430 dollars a month. While many women who had migrated on humanitarian basis a large majority of whom had few skills were remitting approximately 250 dollars a month. Most of the remittances were sent for consumption (food and basic needs), smaller percentage for education and healthcare and very little less than 2 percent was being invested. The other thing about women's remittances were they were being sent to on average 10 family members which was quite a huge load. The feminization of migration has also meant that more women are migrating alone or as heads of households ( Many of the skilled jobs for example healthcare - nurses etc and other social services tend to go to women. They were therefore the primary breadwinners with more capital to remit. In some cases their husbands returned to Africa and women remitted to support them.

I can't speak for West Africa, but certainly this remittance behaviour sounds very much like the findings from research on cross-border migration in Southern Africa (see my own and others' work published through the Southern African Migration Program, SAMP, available through www.africaportal.org). And yes, women absolutely should be central! The World Bank's work on remittances is remarkable for its gender blindness.

The vulnerability of migrant women
That migrant women have become primary contributors to poverty reduction is established through a number of studies.
According to Human Rights Watch, ILO and others, these migrant women, more specifically migrant women domestic workers are also vulnerable to physical and sexual abuse, exploitation, inhuman working conditions, etc.
In Ethiopia, many migrant women domestic workers from the Middle East have come back pregnant, burnt with oil or hot water, disabled, mentally deranged. The story of Alem Dechasa in Beirut is only one example. With their passports withheld by their employers, many migrant women domestic workers in the Middle East have found suicide as the only way out of their predicament.
Those who were deported from the Middle East were sent back penniless, all their payments held by their employers. According to anecdotal stories, these migrant women workers who keep families out of poverty through remittances end up back in the poverty cycle once they are back because, after years of hard work, whatever they have saved is often held by their employers or authorities.
As such, the return of one migrant woman could mean the economic death of her family. Why? Not only does the family lose a reliable source of income, but it is burdened by one more dependent who is either disabled, mentally or physically sick or is pregnant with or carrying an illegitimate child, which represents yet another challenge in the home culture.
It makes a strong economic sense to protect these women from abuse, exploitation, inhuman treatment and to empower them to collect, save and invest their resources so they do not end up going back to poverty.
Ainalem Tebeje
Ottawa
Canada