New data on private participation in infrastructure in emerging markets

The drop in overall investment was driven by a major reduction in activity in Brazil, from US$30.9 billion in the first six months of 2014 to US$1.8 billion in the same period of 2015. Investment in two other large countries, China and India, also fell, reflecting continued challenges to the PPI markets in both countries.

Despite the drastic reduction of activity in Brazil, Latin America and the Caribbean remains the leading region for private investment in infrastructure , capturing 41 percent of the global total, followed by Sub-Saharan Africa (16 percent); Europe and Central Asia (13 percent); East Asia and Pacific (11 percent); South Asia (10 percent); and the Middle East and North Africa (9 percent).

The PPI Database team also looked at growth and investment by sector and subsector. Of the US$25.3 billion global investment, energy captured over half the total with US$16.3 billion; transport attracted US$8.1 billion and water received US$884 million. The energy sector also had the largest number of projects (86), water had the second highest number (19), followed by transport (18). 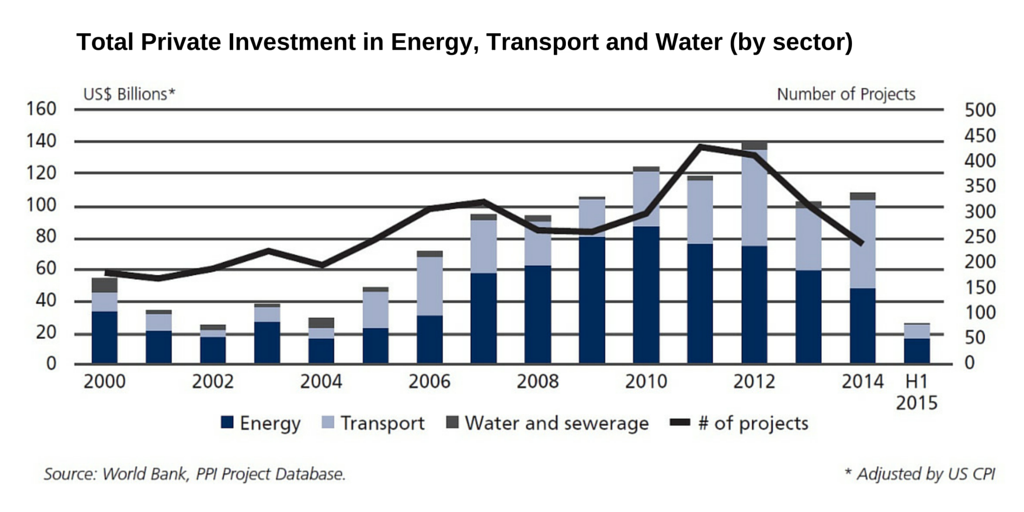 A strong showing in renewable energy was welcome news.  In the first half of 2015, renewable energy captured almost half of total private investment in infrastructure  (US$12.4 billion of US$25.3 billion) and almost two-thirds of all projects (74 of 124).  Solar alone accounted for over one-third of all energy investment; whereas nonrenewable coal made up only 6 percent.  Both in its share of total investment and its number of projects, renewable energy enjoyed the highest ever investment since the World Bank began tracking this data in 1990.  Renewables are bucking this year’s overall trends, and are on course to record the fourth highest figures ever in terms of investments and number of projects.

The countries most active in renewable energy include South Africa, Chile, Jordan, Pakistan, Morocco, and Brazil. Renewable energy investment increased in four of the six Bank regions: Sub-Saharan Africa, Eastern Europe and Central Asia, South Asia, and the Middle East and North Africa. Only East Asia and the Pacific and Latin America and the Caribbean experienced drops in renewable investment (likely reflecting decreased investments in China and Brazil).   For the first time, South Africa became the leading country for private participation , in the first half of 2015, thanks to its Renewable Energy Independent Power Producer Procurement Programme (REIPPP), which saw closure on 16 projects totaling approximately $4 billion in this phase of funding.  The Middle East and North Africa region also made a strong showing, with the financial closure of Jordan’s innovative seven solar projects (arranged by World Bank Group’s International Finance Corporation) and Morocco’s successful conclusion of a pair of solar megaprojects totaling US$1.8 billion.

Visit the newly released H1 2015 Global Update on Private Participation in Infrastructure for full details , and stay tuned for future updates and analysis. 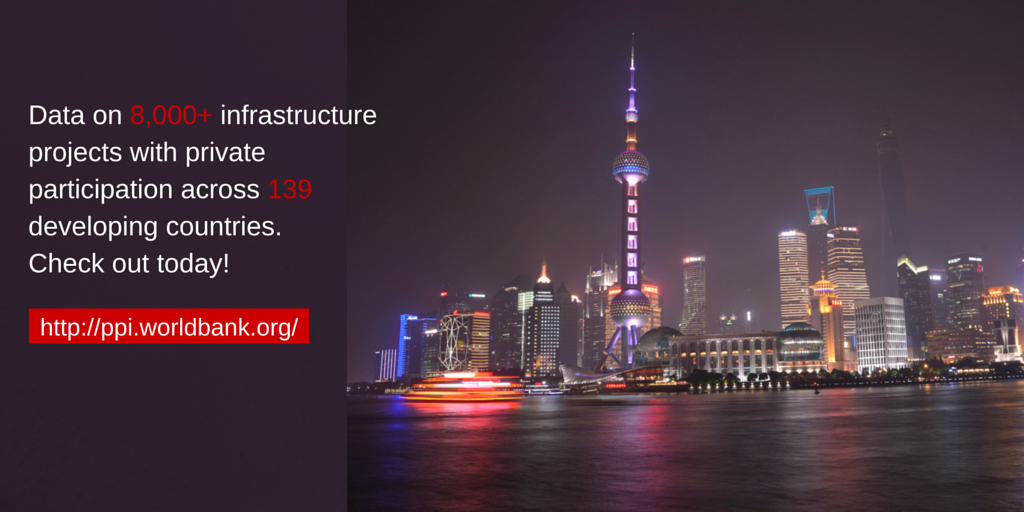