Slight bump in half-year private investment in infrastructure: a sign of recovery? 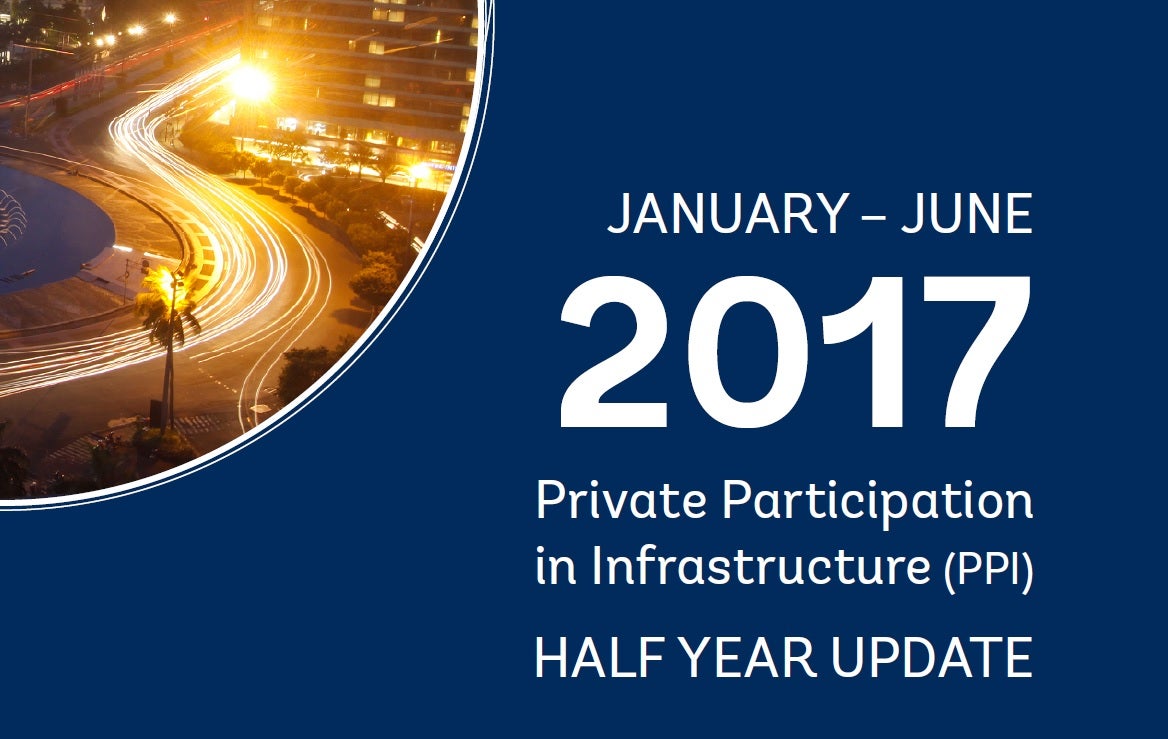 With the World Bank Group focusing on maximizing finance for development, understanding the role of private participation in infrastructure is drawing a lot more attention.

Whilst the enthusiasm for private sector participation in infrastructure gains pace, it is also important to look at the trajectory of PPI over the past decades. The numbers are, in fact, quite sobering.

If one looks at investments in developing countries between 1990 and 2016, the cumulative investment in these 27 years has been $1.6 trillion representing around 6,400 total projects in transport, energy and water. Compare this against the often-quoted infrastructure investment needs of between $2-3 trillion annually. At the same time, the International Monetary Fund estimates that over $100 trillion is held by pension funds, institutional investors, sovereign wealth funds and mutual funds. So, in proportion, private sector investments going into infrastructure in the developing world are minuscule.

A recent surge in PPI?

The recently-released data from the PPI Database for the first half of 2017 reflect a 24% increase in investment volume from half-year 2016 levels, representing $36.7 billion across 132 projects. This apparent hike is still considerably lower than historic levels, and 15% lower than the half-year averages of the past five years.

On the brighter side, one could say that PPI investment in developing countries in 2017 could be showing signs of recovery.  The investment level during the first half of the year (H1) is already slightly more than half of the 2016 full-year level. The 24% increase in H1 2017 levels over H1 2016 is attributable mostly to megaprojects that closed in Indonesia, Pakistan and Jordan, making them amongst the top five private investment destinations in the developing world. Indonesia saw investments of $4.2 billion and $2.2 billion in coal-fired power plants; Jordan had a $2.1 billion investment in an oil shale-fired power plant; and in Pakistan, investments in two hydropower plants were worth $1.9 billion and $1.7 billion. One-third of the global total investment was accounted for by these five projects in these three countries.

Such megaprojects confirm the “lumpy” nature of infrastructure investments, and the underlying data reflects a lack of a consistent pipeline of projects being developed and brought to market. This lack of pipeline development continues to be the main challenge facing emerging markets and developing countries as they try to mobilize private sector efficiencies and capital into infrastructure.

At the same time, it is a known fact that mobilizing private participation in infrastructure requires an appropriate risk-reward balance  and the skills to identify, plan and bring projects to market. This fact might account for the traditionally low PPI in the world’s poorest countries (classified as IDA countries by the World Bank Group). These numbers continue to be low, as the aggregate of projects in such countries during the first half of 2017 is only $2.1 billion. However, this amount represents an increase from 4% of global investment in 2016 (across 14 projects in six IDA countries), to 6% (across 15 projects in 10 IDA countries).

Another important factor to consider when analyzing PPI is whether some sectors are more prone to private participation than others. Interestingly, the answer is yes. Some sectors lend themselves better to private participation. This year is no exception. Energy continues to dominate sectoral investments. While the share of investment in water and sewage has stayed consistent (albeit at around a low 3%) over the last five years, the share of energy investment has been increasing. Conversely, the share of transport investment has been declining. When looking at electricity-generation investments, the high proportion of renewables projects (68 out of 82) is noticeable. However, when looking at generating capacity, renewables only account for 47% of total capacity (5.6 GW out of 11.9 GW).

This is only half-year data. Time will tell if the second half of the year will continue this upward trend, marking perhaps an upturn in annual PPI investment.

Download the Private Participation in Infrastructure Half Year Update report.

Declining private investment in infrastructure – a trend or an outlier? The World Bank is doing it's best to support emerging markets , by supporting
private participation in infrastructure (PPI) , this is very clear as mentioned in
the above article in case of Indonesia, Jordan, and Pakistan in promoting megaprojects , which is maittained by continuity of pipeline development thet is
enhanced by the World Bank positive support.
Yours Very Respectfully,
Dr. Mohamed Taher Abdelrazik Hamada, Ph.D
*edited for privacy*

Developing economies still have to develop necessary political will to improve their financial system, particularly the long term bond market for infrastructural development. The capacity is available in many sources of contractual saving but the legal muscle for market based economy is weak. I observe enormous wastes in the fiscal regimes.