'It’s the Trust, Stupid!' The Influence of Non-Quantifiable Factors on Policymaking 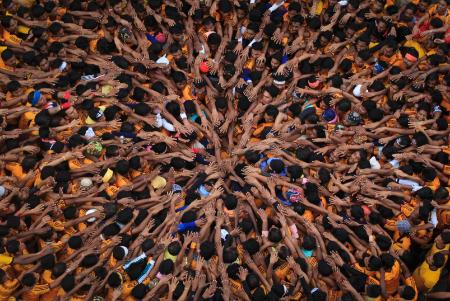 Should trust be something that policymakers need to worry about? I started reflecting on this question after I came across the 2015 Edelman Trust Barometer. It suggests that 80% of the people surveyed in 27 markets distrust governments, business or both (see figure 1).

A staggering number, to say the least. The year 2014 did not spare us from economic, geopolitical and environment turmoil. Nonetheless, the trend over the last few years has been a growing distrust in our leadership, despite the fact that progress has been made in the three main pillars of trust: integrity, transparency and engagement. More needs to be done, it seems.

Figure1. Trust in business and government, 2015 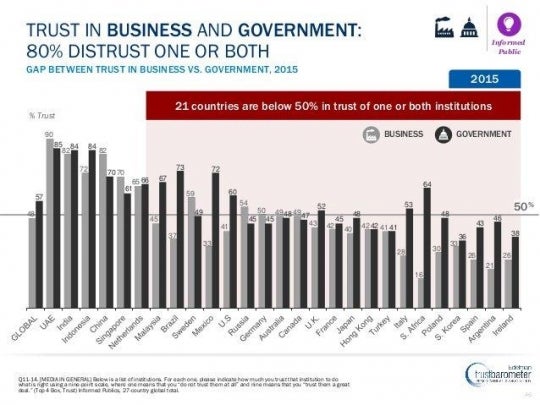 As Ralph Waldo Emerson, the American essayist and poet, wrote: “Our distrust is very expensive.” The lack of trust in our government affects policies and reforms, and thus damages the overall economic environment. Investors will lack confidence and shy away. Growth will stagnate, sustainable jobs won’t be created, and trust in government will erode even further. A vicious circle is being created.

Professor Dennis A. Rondinelli, lately of Duke University, argues: “What are called 'market failures' are really policy failures. The problems result from either the unwillingness or inability of governments to enact and implement policies that foster and support effective market systems.” Distrust thus influences policymakers in multiple ways: They will either adopt bad policies, or overregulate. A study published in The Quarterly Journal of Economics shows that “government regulation is strongly negatively correlated with measures of trust.”  “Distrust creates public demand for regulation, whereas regulation in turn discourages formation of trust. . . . Individuals in low-trust countries want more government intervention even though they know the government is corrupt” (see figure 2).

Figure 2. Distrust and regulation of entry. Regulation is measured by the (ln)-number of procedures to open a firm.
Sources: World Values Survey and Djankov et al. (2002). 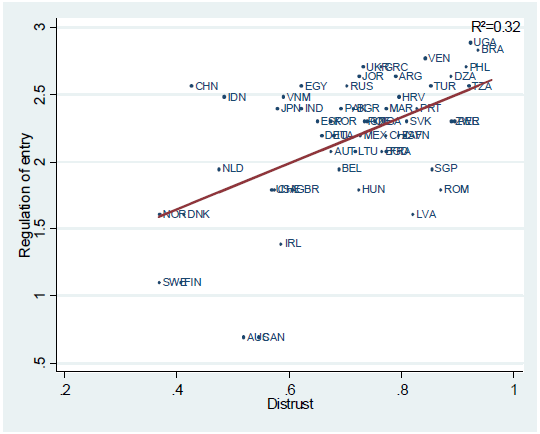 The evaporation of trust in government institutions requires that governments and development agencies rebuild trusted institutions. However, it also behooves all of “society’s stakeholders” to rebuild trust among themselves and “engage.”

Integrity and transparency are two of the pillars of trust that have received a lot of attention during the past decade. Indeed, tackling corruption and ensuring transparency have been at the top of the institutional and corporate development agenda. The third pillar, engagement, has been more rhetorical or grossly underestimated.

A prerequisite for inclusive and responsive policymaking is that citizens use their voice and engage constructively with government institutions. As we have seen, increasing social and political trust helps market economies function more effectively. In turn, sound economic policies foster social and political trust. In recent years, the practice of structured public-private dialogue (PPD) has helped the private sector and other stakeholders engage in an inclusive and transparent way with governments. PPD mechanisms have resulted in better identification, design and implementation of good regulations and policy reforms intended to create an improved investment climate and increase economic growth. As a result, this process has built mutual trust between institutions and business.

Confidence-building has been most critical in post-conflict and conflict-affected states where deep mistrust among stakeholders is prevalent. That topic will be discussed in greater depth at our 2015 Fragility Forum’s session on public-private and multi-stakeholder dialogue, coming up on February 13. Foreshadowing the Fragility Forum, a panel discussion in Preston Auditorium on Monday, February 2 – featuring, among others, Sarah Chayes of the Carnegie Endowment for International Peace, who is the author of  “Thieves of State: Why Corruption Threatens Global Security” – will focus on "Corruption: A Driver of Conflict."

In an age of distrust, this type of policy reform – through multi-stakeholder engagement – is not an obvious exercise. The economist Albert Hirschman claims that “moving from public to private involvements is very easy because any single individual can do it alone. Moving from private to public involvements is far harder because we first have to mobilize a lot of people to construct the public sphere.” But the increase of PPD platforms across the world – the WBG Trade & Competitiveness’ Global PPD Team currently supports 47 PPD projects worldwide – suggests that there is an appetite for engagement among citizens, business and governments alike.

Trust can be slowly restored by, among other things, designing adequate interventions such as PPD mechanisms. By their inherent iterative process of discovery, collaborative identification of issues and joint problem-solving, PPDs can activate favorable mental models of stakeholders. According to the 2015 World Development Report on "Mind, Society and Behavior," these “mental models can make people better off.” I would argue that these mental models drawn from their societies and shared histories can help build trust as well.

Trust matters for policymakers. Ultimately, it matters for all citizens. Designing interventions and offering a safe space where stakeholders can engage with governments in an inclusive and transparent fashion will go a long way toward restoring that valuable trust. Very good write-up. Today, trust is the main component to get things done between the private sector, government and the civil society. Without trust, no one can move ahead even a single step....it is the first most important ingredient for people in today's context. More importantly, it is very critical in promoting business as businesses can also be thrived if there is trust on government and implementing agencies. Resolving conflicts, creating environment for negotiations, etc ..create opportunity both to the states and the private businesses... And trust can only be released/attained if we could initiate discussions through public private dialogue. PPD has helped to win trust and control electricity theft, minimize conflicts, push reform agendas, create harmony between people, increase investments......etc.
Practically speaking, trust has helped to implement reforms, discuss nationally sensitive agendas, push for reforms, explore new ideas for investment, help bridge the gap between the public and private sector and invite more local and investments. In such a context, trust has to be planted effectively to resolve for greater good of the people. In Nepal, it is more important due to fragmented private sector and political instability, as Nepal Business Forum has already been the best platform to minimize conflicts and create trust among the stakeholders.

Thank you for this well thought and in depth article which again highlights the role PPD can play in building trust. It would be good exercise to analyze if countries with efficient PPD platforms or structures have better or higher level of trust or not? Beyond that, this article paves the way for other important angles of analysis