Western Balkans: Through Science, Innovation and Collaboration, a Program for Shared Prosperity 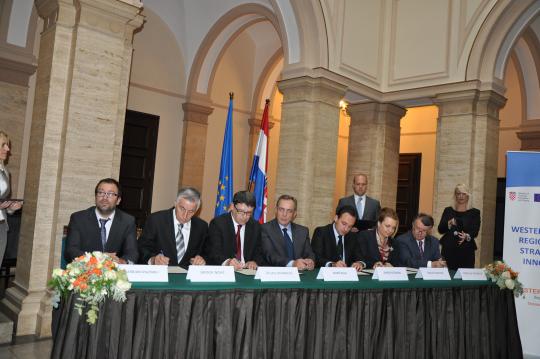 You’d probably be skeptical if I told you that the Western Balkans – a region that has long suffered from social and ethnic fragmentation – now has a strong opportunity to boost shared prosperity by promoting research, innovation and entrepreneurship. Your views might not even change if I showed you that such idea is validated by preliminary studies linking research and innovation to the performance of firms and countries in the region.

You might be surprised – yet your initial assumption might be unchanged – if I told you about the kind of companies that are starting to build a different economic landscape in the region: firms like UXPassion, Pet Minuta, Strawberry Energy or Teleskin, which are all technology-based startups created by young researchers who became entrepreneurs. Click on this link (http://www.worldbank.org/en/news/video/2013/10/22/western-balkans-research-and-development-for-innovation), or on the video embedded below, to meet them and other innovators from the Western Balkans.

Indeed, the transition to a market economy and the breakup of the former Yugoslavia starting in 1991 had a severe impact on the research and innovation sector in the Western Balkans. Research capacity narrowed significantly, and R&D’s links to the productive sector of the economy disappeared. The new industrial structure has naturally a lower propensity to invest in research while the current business environment promises low returns to the enterprise investments in innovation. Efforts to revamp the region's research and innovation sector were most of the time short-lived.

As a result, the performance of the research and innovation sector in the Western Balkans is gloomy. The region’s current investment in R&D are roughly the same amount as the investment by just the second-largest university in the United States. (In 2012, for example, only 38 patents from the region were registered with the U.S. Patent and Trade Office – compared to the average of 27 patents registered by each American university.) At the same time, very little of those investments are efficiently transformed into wealth. For example, for each invention that received a patent, the region spent, on average, three times more in R&D resources than does the United States.

Building on a continuing series of efforts to reform their national innovation systems, in the hope of changing their gloomy prospects, the Western Balkan countries in 2009 committed to develop a joint regional research and innovation strategy. That strategy, developed between 2011 and 2013, was formally endorsed last month by the ministers responsible for science and education from Albania, Bosnia-Herzegovina, Croatia, Kosovo, the Former Yugoslav Republic of Macedonia, Montenegro, and Serbia. The preparation of the strategy, which benefited from technical assistance by the World Bank and from the financial support of the European Commission, involved representatives from the region’s leading universities, research institutes, private sector firms and government agencies. Discussions of the draft proposal were pursued in all seven countries as part of a large outreach exercise.

This is the first time that the countries from the region have agreed on a common view of how to address the challenges of the region’s research and innovation sector: In effect, they have now undertaken a science and research reform and investment program for the entire region. The primary objectives are raising research excellence and productivity; reinforcing the bonds between science and industry; encouraging investments in science from the private sector; and promoting better governance of sector policies and programs.

The ultimate goal is to spur growth, the creation of job opportunities thereby boosting shared prosperity. The vision is not just to spend more wisely, but also to spend more on science, research and innovation. The Western Balkan countries have just committed to a notional regional target of 1.5 percent of GDP in total R&D spending by 2020.

That target may be too ambitious for countries with high priorities on the fiscal side. Yet they seemed convinced that more and better investments in research and innovation will be critical to change a growth pattern driven by domestic consumption and face the fierce competition of low-wage countries in global markets. This comprehensive approach to research and innovation will also bring the sector closer to the European Union, facilitating the accession process in which most of the countries are still involved.

The Western Balkan countries have also identified four programs that they will implement jointly:

In addition, the Western Balkans effort will create a platform to promote continued policy dialogue, training and assistance on the design, monitoring and evaluation of the various programs. Called the Western Balkans Innovation Strategy Exercise (WISE) facility, the center will be located in Split, on the Croatian coast. Through the WISE facility, the countries expect to improve transparency, policy evaluation and learning.

By working together, the countries expect to benefit from the synergies that exist from their shared history and heritage, remaining economic links and common geographic factors. They also expect to create a sort of regional coalition to encourage the advancement of reforms at national level – through positive “peer pressure.” Regional programs will also have less chance of political capture, providing a more stable source of funds allocated on the basis of merit.

The countries have pledged to mobilize €200 million over the next seven years to finance the implementation of those initiatives. Croatia will cover the WISE’s administrative costs for the first 12 to 24 months. The Regional Cooperation Council, which also contributed to the development of the Strategy, has agreed to cover part of the cost in the initial months. Scandinavian governments with a presence in the region have expressed the interest in supporting the initiative. Continued support by the European Commission is also expected.

The WISE facility will be launched in early 2014, and its first programs should be running on a pilot basis by that fall.

This is a moment for action. The researchers, entrepreneurs and governments of the Western Balkan countries have grasped that fact, and they are working to forge a future that enjoys shared prosperity by deploying some of the region’s greatest strengths: its capacity for research, innovation and entrepreneurship.