It is pretty easy to understand how and why land use patterns around public transit stations can influence the way we move around the city.

As more and more people live and work in a neighborhood with a limited land area, it becomes increasingly challenging to drive around without encountering congestion or to find a parking space easily. In this situation, public transit and non-motorized transport (NMT) become attractive alternatives for people who otherwise are reluctant to give up the comfort and flexibility of driving.

Conversely, as street blocks get bigger, people may find it takes too long to access public transit stations, which discourages the use of public transport facilities.

As straightforward as the logic may sound, the nature and magnitude of such influence are yet to be evaluated with solid empirical evidence. To take a closer look at the linkages between land use and travel behavior, I decided to study the case of Boston in the United States. I chose Boston because it boasts an effective public transit system, and was one of the first American cities to embrace transit-oriented development (TOD), an urban planning approach that promotes compact and mixed use development around public transit facilities. By analyzing data on travel modal share, car ownership, household characteristics and land use patterns within the half-mile radius around 298 transit stations in Boston, I have the following observations:

1. As density increases, more people choose to move around the city by public transit and non-motorized transport (NMT) and fewer cars are kept in each household. On average, doubling the residential density is associated with a 19.7% increase in the modal share of public transport and NMT combined and a decrease of 0.4 vehicles per household (Figure 1).

Figure 1: The relationship between car-dependency and residential density 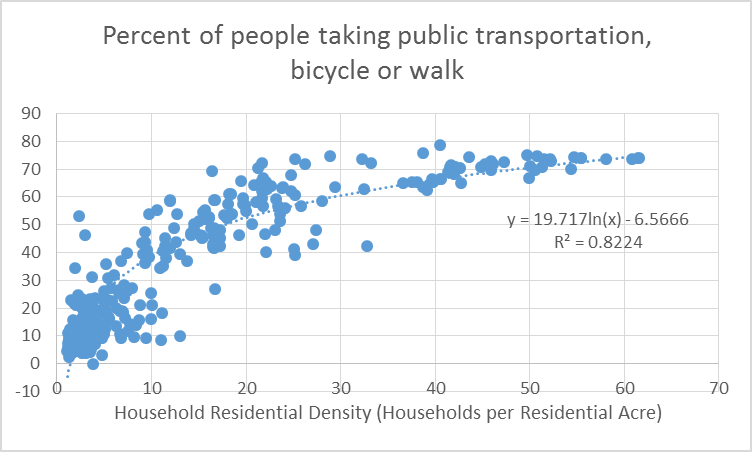 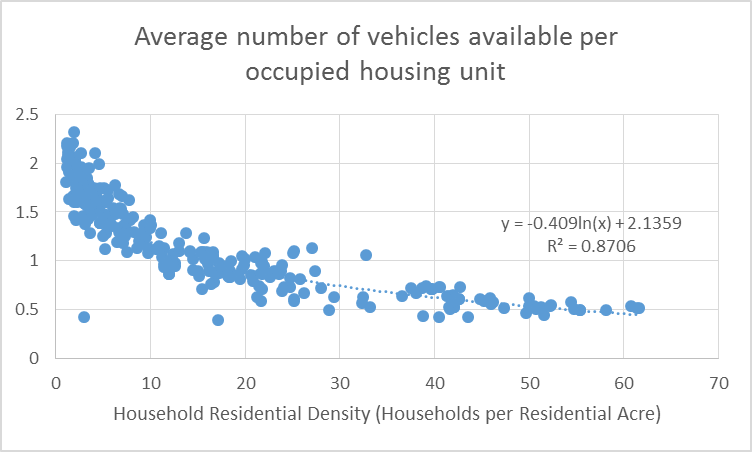 2. Land use configuration also has strong impacts on people’s travel behavior. Taking block size as an example: with larger street blocks, fewer people use public transit and NMT while each household tends to own more cars. Specifically, doubling the block size is associated with a 22.1% decrease in the modal share of public transport and NMT combined as well as an increase of 0.5 vehicles per household (Figure 2).

Figure 2: The relationship between car-dependency and block size 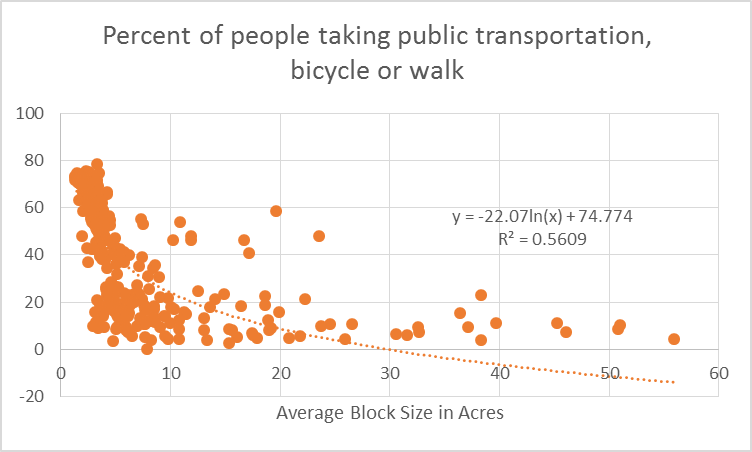 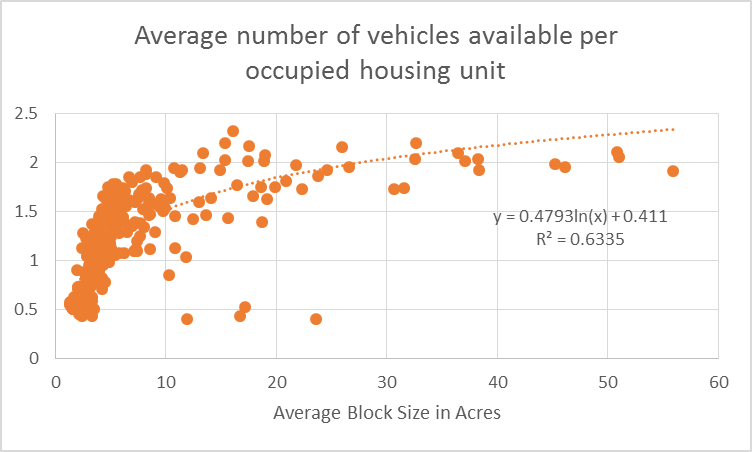 The findings are in line with the TOD principles that have been developed and practiced widely across countries, that is, compact and dense land development with smaller street blocks would help cities shift towards a life-style that is less dependent on private cars. The positive implications on environmental quality, climate change mitigation and human physical wellbeing have been well-documented.

More blog posts
Cities in developing countries have been learning from Boston and other advanced examples. They are eager to integrate TOD in their ongoing urbanization process as a measure to curb sprawl and remediate congestion. In China where I work, the Ministry of Housing and Urban Rural Construction recently issued a national guideline for urban planning and design in the proximity of metro stations that follows the key principles of TOD (available here in Chinese).

The World Bank has been actively involved in China’s effort to build livable cities through TOD. It has been financing metro constructions with TOD pilots in the urban centers of Nanchang and Tianjin. Meanwhile, under the Sustainable Cities Integrated Approach Pilot program funded by Global Environmental Facility (GEF), the Bank is working with seven cities across China to develop tailored TOD strategies at city, corridor, and station levels, and is also developing a TOD toolkit to facilitate the design, construction, financing and evaluation of TOD pilot projects. Neither TOD nor Self driving Cars or Pooling or Share taxis, but PPTS based on ARSLAAN Protocols is the answer for the present and future Transport Systems of the world.

Neither TOD, nor Self Driving Cars, or Pooling or Share Taxis but PPTS under ARSLAAN protocols is the answer for the present & future Transport systems of the world, everywhere.
Solution to not only City transport but every other transport for every city & country of the world, was found long back during 1986-90 at Bangalore; the result of the Research in to Bus transport of the City, at the behest of the then, Prof & Dean, Commerce & Management Faculties and later Vice-chancellor of Bangalore University, Dr.K.Hanumanthappa, which I had undertaken. He was so impressed by the studies and the solution, that he was ready to host under the auspices of the University, an International Seminar, wherein transport experts from all over the world would be invited where the theory would be exposed and presented. He had also advised me to just publish the theory and that someday I would be offered a Nobel Prize for the same. I had demurred and discouraged him saying that this needs further studies at various levels & future possibilities need to be examined. It was not implemented in the City because the three bureaucrats responsible for the City’s Transport, two of whom, were former students of the Vice-chancellor whom he had met, had their own vested interests. The Professor told me that they are happy with the present system, because they can levy fines on traffic offenders and collect a lot of extra revenue for the Government, which helps them obtain promotions & higher rankings. The two were the Secretary of the State Government for Transport and the Traffic police commissioner of the City. I had tried to meet the Chief Minister, but his Private Secretary, yet another bureaucrat discouraged me from meeting the Chief Minister but had advised me to meet The third bureaucrat, who was a very senior Officer and head of the City’s and State Transport Undertakings. I met this Gentleman, who just 6 months prior to my meeting him with the theory, had built and inaugurated with great fanfare, the Central Bus Station of Bengaluru City. This station was then claimed as the greatest show with many innovations etc. My theory had condemned this Station as unnecessary and useless, but would become the center of all problems. He, after studying the theory, very politely declined to implement the solutions saying that it has policy matters which need to be accepted by central authorities at Delhi. This bureaucrat later retired as one of the Top Secretary to the Government of India. This theory & System was extended to State Level later at Mumbai and to national & international level finally in Delhi, India. A new, future transport for humankind was the result of long R & D. You will understand the significance of the solutions, in the form of a theory & System first titled 'ARSLAN (Approximate Regular Straight Line Automated Network) Traffic Management Techniques' for which a patent was sought, when I tell you that it was lifted, stolen, copied by a very reputed, international, Government Consultancy Organization, who wanted to implement it in their name as their achievement during 2003-5 for Delhi. When I protested to the Minister of Transport and warned of civil and criminal cases against the Minister, the Secretary, the Delhi Transport Undertaking, the Consultants & the Government of Delhi, they shelved it and buried it deep into the Earth. Though the City, Delhi, continues to suffer from a host of Urban problems, they have not been able to extricate the buried file. And I have not been able to push it through because of the huge debts I had incurred during the Research and the inability to raise sufficient funds necessary, particularly, when Government authorities, who control transport, are incapable of understanding and implementing the systems.
This system was proposed to the World Bank later during 2011 under their scheme ‘Carbon Partnership Facility’ as part of the processes & methods under which we would be able to abate and stop 30 billion Tons carbon emissions each year, from India alone. Though they agreed to fund the program, they brought in the Government of India and said that the program is very large and they could enter only if the Government of India submits the program and that they would sit with the GOI and chalk out a program and accordingly finance it. I sent it to the GOI after telephone instructions, but none seems to have opened and read through the papers, the previous and as well the present Governments.
But they are doing everything, planning, designing, promoting and investing huge sums of money in methods which will not solve any of the problems. And international Governments and Banks are supporting such fallacious schemes. I stand as a mute helpless witness.
I cannot explain the entire theory and systems in the space available here under this blog. Though I am writing a separate book on this for the entire world, I have as a short term effort because of the urgency of the problems, authored a book titled “First Delhi, the national Capital, the entire State, One Empowered, Dark Green, Smart City & later, India, the entire Nation’. This is published in US and is available on all Amazon websites. In this book I have given the outlines of the theory, the protocols under which Public Transport Systems should be built etc. Please refer this book for more and better understanding and solving transport problems now and in the future everywhere, all over the world.

Thanks a lot for your comments. As illustrated by empirical evidence, urban transport is not a standing-alone issue that can be addressed without considering its interaction with land use patterns. A multi-sectoral holistic approach is needed in order to provide sustainable urban mobility for people living in cities today and tomorrow. This approach will consist of techinical innovations as well as policy reforms and planning instruments, ranging from driverless car to shared mobility and TOD. The system you mentioned could also bring value-added to such a collective effort.

This blog has some relevance to cities that are trying very hard to put in place an integrated transport system. My guess is the city authorities need to be focus and know what the cities needs. You can have ToD or a system that prioritizes NMT. But if urban spaces are being invaded by scheme-rich developers who have little concern for the form and scale of cities or for people, the chances is that people would prefer to keep their cars. After all the urban landscape has been degenerated into a playground for motorists and the elites.

Thank you for the article