Weathering storms in Central America: The impact of hurricanes on poverty and the economy

Countries are facing increasingly frequent negative impacts from adverse natural events. Central America, a region prone and vulnerable to disasters, is a clear example. Just from 1992 to 2011, Central America was hit by nearly 70 hurricanes  with an average of 8 events per year, hindering sustainable economic growth.

Between 2005 and 2014, due to natural disasters, the region had a nominal cumulative loss of around US$5.8 billion, and witnessed more than 3,410 deaths and hundreds of thousands of displaced people. More recently, in October 2011, Tropical Depression 12-E hit the coasts of El Salvador and Guatemala with damages amounting to nearly US$1 billion.

In two recent studies, we evaluated the causal impacts of hurricane windstorms on poverty and income as well as economic activity measured using night lights at the regional and country level. In both cases, we applied a fully probabilistic windstorm model developed in-house, and calibrated and adjusted it for Central America. The first study (on poverty) used yearly information at the household level (for income and poverty measures) as well as the national level (GDP per capita). Due to the limited comparable household data between the countries, we decided to follow up with the second study (on economic activity) using granular data at the highest spatial resolution available (i.e., 1 km2) to understand more deeply the (monthly) impact over time.


Our results are striking:

The first study found that one standard deviation in the intensity of a hurricane windstorm leads to a decrease in total per-capita GDP growth by 0.9% –1.6% and a decrease in total income and labor income by 3%, which in turn increases moderate and extreme poverty by 1.5 percentage points. See Figure 1 that shows the findings of the study using different measures of hurricane indexes (maximum sustained wind speed—MSWS—or unweighted wind speed; Index of Hurricane—HDH—or population weighted index; and Wind Exposure Index—WEI—or area weighted index). 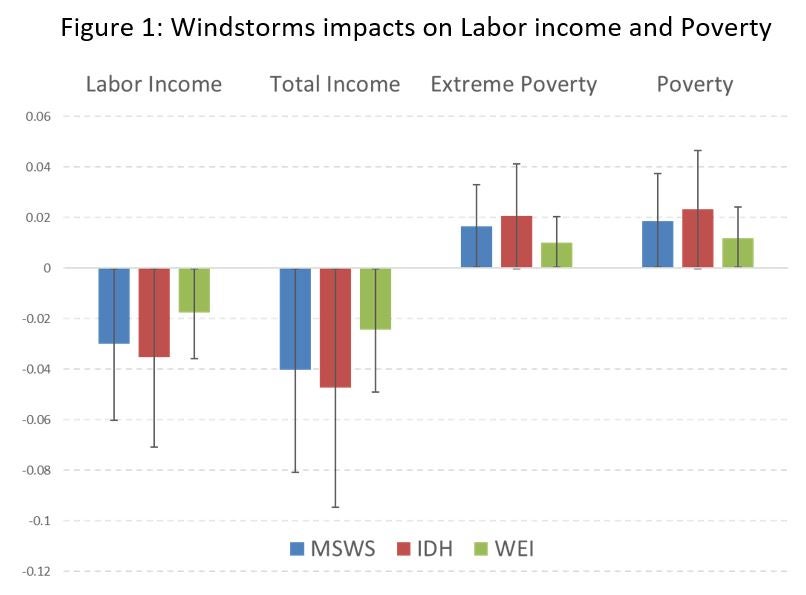 Our follow-up study provides better insights into the short-term effects of storms. We found that major hurricanes have a negative impact on GDP growth—an average decrease of 2.6% 3.9%—in up to 12 months after the hurricane strikes. Interestingly, monthly data allowed us to evaluate further the recovery impacts: After the 13th month, we found positive effects during the second year and the first half of the third year as evidence of post-disaster recovery. This suggests an increase from 2.5% to 3.6% in GDP growth. See Figure 2. 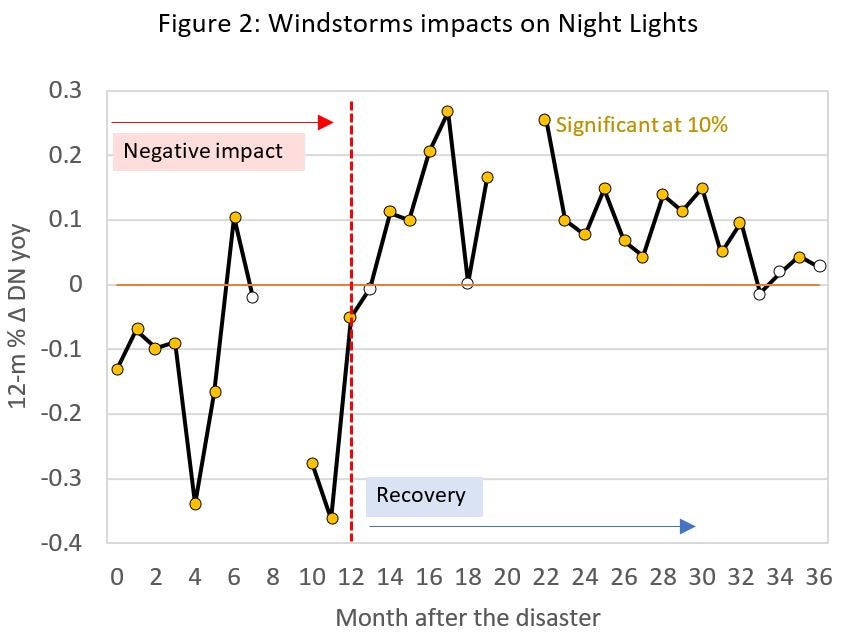 The studies suggest three important key takeaways for the disaster risk management community: The last point shows the limitation of looking at the macro impacts of disasters (through night lights, in this case) and the importance of understanding the micro level impacts as showed by our results. This is an important area of future research, and we will discuss it in our next blog.

This research was funded by the World Bank and the Global Facility for Disaster Reduction and Recovery (GFDRR).