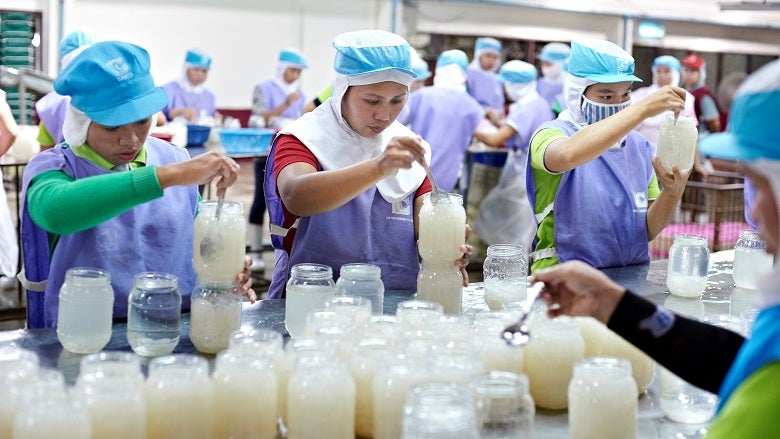 East Asia and the Pacific, a region that is already highly open to trade, can reap significant economic benefits from further liberalization, new World Bank research shows – with Cambodia, Vietnam and other lower middle-income countries gaining the most.

Our study simulates the impact of the Regional Comprehensive Economic Partnership, which took effect in January 2022, on economic growth, trade, poverty and inequality. The partnership encompasses 15 countries with 2.2 billion people accounting for almost a third of global GDP. Over time, trade would expand, wages and incomes would rise, and the middle class would grow, boosting Asia’s appetite for imported consumer goods.

The pact, years in the making, comes at a propitious time. It goes against the tide of rising protectionist sentiment around the world. And it could provide an additional tailwind to the recovery from the Covid-19 induced recession – the deepest since World War II.

The agreement envisions eventually eliminating import tariffs on most goods – from Australian coal and iron to Thai computer drives and Vietnamese-made mobile phones. Many non-tariff barriers (such as overly restrictive technical standards or onerous regulations) and quotas would also disappear over the next two decades.

Production is likely to shift to the most competitive sectors, raising productivity and growth, as our study finds.  As productivity improves, workers’ wages would rise. Consumers would benefit from lower prices and greater variety of imported goods from cars and clothes to food products.

At first glance, the partnership’s benefits – in the aggregate -- may appear meager. Reducing tariffs and non-tariff barriers alone would boost real income in the region by 0.21 percent by 2035 over the level that would prevail without the partnership. That’s largely because tariffs among member countries are already so low – averaging just 7.3 percent.

The benefits would likely be far greater if members successfully reduce tariffs and non-tariff barriers and take full advantage of the preferential market access afforded by the liberal  rule of origin  which requires regional content of just 40 percent to qualify for lower tariffs. In that case, real income on average could grow by 0.5 percent by 2035.

In our most optimistic scenario, we assume that the region will also see an additional “kick” in productivity as greater openness brings additional skills, technology, and capital.  Under that scenario, which is by no means a certainty, real income could grow by as much as 2.5 percent on average by 2035.

Of course, averages hide considerable diversity. Lower middle-income economies such as Laos are likely to benefit far more than high-income members like Japan. In the case of Laos, for example, reducing tariffs and non-tariff barriers and adopting a common rule of origin would boost income by 2.1 percent by 2035. The productivity “kick” would raise that to 2.4 percent. In Vietnam and Malaysia, real incomes could grow by as much as 5 percent.

Today, half of the population in the RCEP, or 1.1 billion people, consumes the equivalent of US$10 a day or more in purchasing power terms – the rough definition of middle-class status. Under the most optimistic scenario, the partnership could draw as many as 27 million more people into the middle class by 2035. As a proportion of the population in 2035, the largest gains in the middle class would be seen in Laos (1.72%), Vietnam (1.59%), Indonesia (1.35%), and China (1.31%).

Women’s wages are projected to rise faster than men’s – particularly in Southeast Asia. That’s because many of the industries getting the biggest boost from the partnership employ larger shares of women  – including textiles, apparel, electronics, and services such as tourism and air transport.

Until now, the partnership’s 15 members have been split among the 10-member Association of Southeast Asian Nations (ASEAN) and five major economies that have individual agreements with ASEAN – Australia, China, Japan, Korea, and New Zealand.

For the first time, the partnership unites China, Japan and Korea in a single free trade area, providing opportunities for their greater integration into regional value chains. Developing-country members would also benefit.  Cambodia, for instance, could see its exports of electrical equipment and machinery increase by 36% to Japan and by 28% to China and to Korea.

While the agreement offers big opportunities for boosting growth and reducing poverty, implementation will be a challenge. Lowering and eliminating tariffs will be the easy part. Reducing non-tariff barriers will be harder, as will implementing a single rule of origin – including creating an environment where exporters can take full advantage of these rules without incurring high administrative costs. And to get the most out of the partnership, members should also invest in trade facilitation measures and tackle the regulatory barriers to reduce the costs of moving goods and services across borders.

Associate Professor at the University of the Republic, Uruguay and WBG consultant