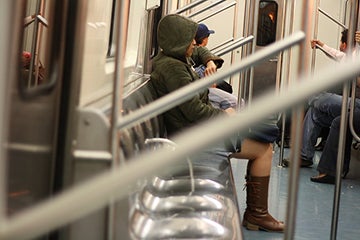 The room was quiet. The group sat, thoughtful, each one of the participants with their heads around a complicated issue, silent. Suddenly, one man stood up and spoke out, “We have to set something straight, there are more of us who want this to stop”. This sentiment, expressed during a focus group in Mexico City, has become a powerful anchor for an ongoing initiative we are undertaking to understand and address gender-based violence in public transport.

Personal security on and around Mexico City’s public transport system is a serious problem that frames the travel experience for many, particularly for women. A recent report by the Mexico City Women’s Institute showed that 65% of women using the system have suffered some form of sexual assault while on the system or when accessing it. However, there is little argument that only a fraction of these events are reported… which leads us to believe that the actual percentage could be much higher.

Assessing the situation: what Mexico City public transport users and operators told us about gender-based violence

In order to characterize and understand the issue, we carried out a combination of interviews, workshops and focus group discussions of drivers and passengers (both male and female) inspired by a “human- centered design approach”. The information we gathered confirmed existing knowledge: only about a fifth of incidents are reported to the authorities, and informal minibuses are considered the venue that leaves women most vulnerable. The discussions also allowed us to gain some valuable new insights on the following aspects:


Thinking outside the box: quick wins and long-term improvements

Based on these findings, we are now working with the local government, NGOs and some of the private operators to pilot a series of potential solutions:

We are hopeful that these efforts will make a difference. We are working with an academic team to design an impact analysis, looking for funding opportunities to accelerate implementation, and constantly talking to potential partners and collaborators.  If you are interested in the issue and have ideas on things we should try and things we could have done differently, we would love to hear suggestions!