From crisis to opportunity: How the Philippines built 500km of bike lanes in less than a year

While on her way to another hospital shift as a radiology clerk in Metro Manila, April boarded a bus and watched the news with her fellow commuters. The rise of COVID-19 cases in the Philippines led the government to announce an extensive lockdown, which included suspending all public transport operations. April doesn’t own a car and she couldn’t afford to miss work because she has to provide for her elderly mother and disabled brother. This meant she and other healthcare workers would have to walk for hours after a long shift. But she soon realized she had another option.

“I never thought of riding a bike to the hospital before,” April recounted. “But when we healthcare workers didn’t have the option to use public transport, I tried to pedal. At first, I was nervous, especially on major roads. But in the long run, we got used to it and became more confident.”

Just like April, scores of commuters who used to rely mostly on public transport turned to cycling as a result of the pandemic. And many stuck to their bike even after mass services resumed. With more and more cyclists converging on main roads, it was necessary for the national government to think about solutions for accommodating the growing number of bikes and ensuring all road users can get around safely. 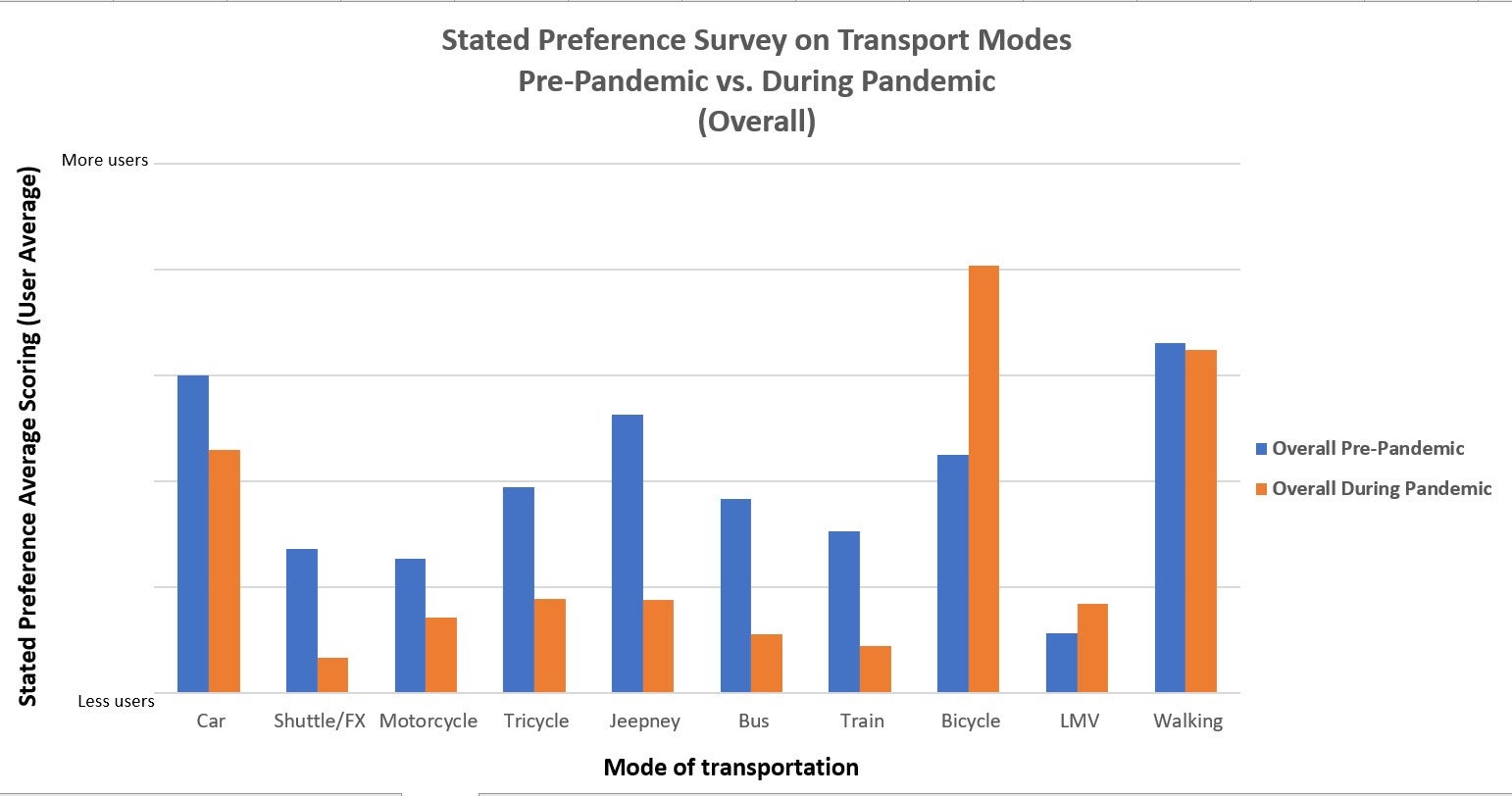 A survey launched in partnership with the World Bank Group’s Technical Assistance team and national government agencies gathered more than 7,400 respondents showing the increase in cycling amongst Filipinos during the COVID-19 pandemic lockdown.

Cycling as an opportunity during the COVID-19 crisis

In September 2020, the rise of cycling along with the tremendous advocacy work done by CSOs, urban cycling advocates, and many others led the national government to allocate more than 22 Million USD for active mobility infrastructure. This translated into the largest bike lane construction program in the country’s history: almost 500 kilometers across Metro Manila, Metro Cebu and Metro Davao.

Designing, adapting and building hundreds of kilometers of infrastructure for active transport in less than a year is no easy task. To support this initiative, the World Bank Philippines Transport Team, the Global Road Safety Facility (GRSF) with funding from Bloomberg Philanthropies, under the Bloomberg Philanthropies Initiative for Global Road Safety, and the Australian government jointly provided technical assistance to support the government’s implementation of the bike lane construction program, with a focus on ensuring the new cycling infrastructure could meet the highest safety standards.

The WB team reviewed the initial guidelines produced by the Department of Transportation and the Department of Public Works and Highways to confirm they followed the Safe System approach. A series of Road Safety Inspections and Road Safety Audits were also conducted to ensure that national government agencies received appropriate guidance on international best practices through every step of the process, from design to construction.

As part of the technical assistance, the WB team not only worked with road safety experts but also involved the community, including persons with disabilities, women, and the elderly. A series of surveys and focus group discussions were held to ensure that community feedback was considered in reviewing current and future infrastructure designs.

To build on this work and promote long-term results, the World Bank team with additional support from Netherlands Embassy carried out a series of trainings on topics such as Dutch Cycling Infrastructure principles, which are considered among the best in the world. The trainings brought together a wide range of stakeholders, all of whom have invested their time and efforts in helping create quality cycling infrastructure and promote a culture of safety: national government practitioners, local government staff, academia, civil society organizations, private institutions, etc.

Within 9 months, the Philippines was able to create almost 500 kilometers of bike lanes along national roads. This multi-sectoral effort went a long way in raising the profile of cycling as a reliable and sustainable form of transport. Importantly, it also empowered and inspired local governments and communities to add on to the new network by building their own bike lanes.

Almost 65% of respondents from a post-construction survey said that they used active transport and light mobility vehicles (LMVs) more once the cycling infrastructure was introduced.

As the cycling network grows in the Philippines, healthcare workers like April now have another safe and healthy way to get around.

“Even after the lockdown, I will still use my bike to go to work and go home,” April said, “because I believe I will not only help lessen the pollution, but I will also help myself get fit.”

With the continued partnership and support of communities and civil society, governments can continue to invest in active mobility infrastructure—and many others can join April on this journey toward healthier cities and communities.

Note: This blog was revised on February 16, 2022 to reflect and recognize the critical role communities and civil society played and continues to play in advocating for safe cycling cities in the Philippines. Creating bike lane is great if done properly. But taking away 1 lane for other vehicles on major roads is in my opinion counter productive. Also dangerous.

My hope to see all countries are in the same opinion as the Philippines government. The love of the people and all will be happy to see the beautiful government for the people's. Take care and a beautiful ride.

I only wish the Australian Government had also taken the opportunity, but they didn't.
And local Government bodies like the Adelaide council didn't do anything major either. Great pity.

My hope to see all countries are in the same opinion as
the Philippines government.
The love of the people,respect and all of will be happy to see
the beautiful government for the people's.
Keep in touch and a beautiful ride.
Thank You.

Thank you so much WORLD BANK ahead too all sending safe encourage growing their're talented including varieties athletic '' highlight sporty '' healthcare as figured BIKE SPORT in Philippiness too hospitalities in MANALIA city among 500km during collaborate national govermental & civil society and bringing more confidence continuation ensuring our roads too all users into players Bicyles among road from metor ''' metro cebu '' metro CAVAO among our people's so much getting around safety through partnerships launching in biggest against WORLDBANK ahead when spending supports in our countries intiative by supports with governmental together implementation of the bike riding under road of Philippiness including disabilities persons and women's during built worked when implementation Long-term for bringing resulting of opportunities from supports & carer Netherland embassy too all national governmental , practitionary , academic , civil society , situation, sustainable transport too all.!