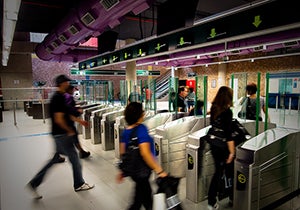 When planning transport systems in developing countries, one of the main challenges is to evaluate the proportion of income spent by poorer households on transport as well as in understanding transport patterns in relation to residential location, travel distance and travel mode. High real estate prices in urban centers often force low-income households in developing countries to live farther out in the periphery, with consequences on the way urban agglomerations develop and with subsequent effects on the levels of motorization, congestion, local air pollution, physical activity and the expansion of urban poverty.

In today’s conversations about climate change, a main concern is that as urban residents’ income rises they will tend to choose automobiles as their main mode of transport. The paradox is that in many emerging cities, low-income urban residents are still too poor to afford public transport. Relatively high fares mean that public transport is beyond the reach of the 20% at the bottom of the income pyramid and that public transport cannot meet its social objectives. This is the case, for instance, in cities like Sao Paulo or Rio de Janeiro. The same applies to Mumbai, Mexico City and Manila, where poor people have to spend more than a fifth of their income to transport (see figure below). This is a huge obstacle to their efforts to climb out of poverty (to learn more, please see Affordability of Public Transport in Developing Countries, Transport Papers TP-3, January 2005 : Robin Carruthers, Malise Dick and Anuja Sauraker, The World Bank Group).


The Affordability Index: public transport fare for a 10km-commute
relative to per capita income 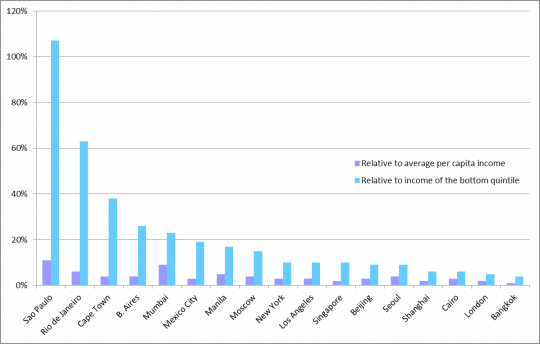 Affordability of transport is also an issue in developed countries. Many homeowners and renters are now facing high transport costs in their search of affordable housing, often because they are forced to live in outlying areas with few, if any, public transport options. In many cities, while housing costs in distant suburban locations tend to be lower, transport costs can in turn be higher. In the United States, many homeowners and renters have opted to relocate from the city to the suburbs, hoping that more affordable housing on the outskirts of the city will lower their housing expenses. But the cost of living in a location is not just the mortgage or the rent…transport-related costs need to be factored in as well, and these tend to be more difficult to estimate than housing costs. As a result, many households who migrate to the suburbs end up trading relatively high housing costs for high transport costs. As a result, suburban residents often spend more on transport than they spend on rent or mortgage, while the combination of housing and transport costs now averages 57% of working families’ income in U.S. metropolitan areas.

It is time to ask ourselves how we can turn things around: how can we reverse current trends and make public transport an effective poverty-fighting tool as well as an appealing, affordable alternative to the private car?

As it turns out, the issues of affordability and behavior change go hand in hand: one way of getting urban residents to embrace public transport so that they do not switch to cars as soon as they can afford it is to demonstrate that relying on private cars for transport can significantly add up to living expenses.

A new website unveiled by the U.S. Department of Housing and Urban Development (HUD) a few months ago helps analyze the combined cost of housing and transport for an average household budget depending on neighborhood characteristics and built in environment. With support from a national Location Affordability Index (LAI), the website highlights the share that transport costs represent in a household budget in addition to housing costs. 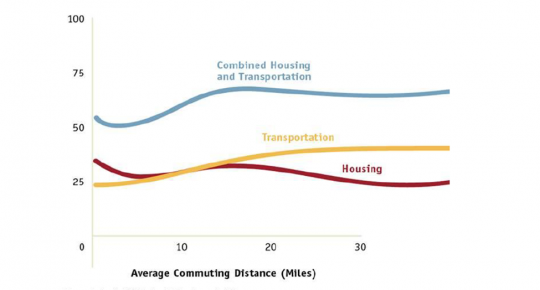 The location affordability tool makes it a lot easier for households to get a clear picture of their overall expenses that includes both housing and transport costs. Households can use the tool to estimate both transport and mortgage or rent costs for any location within the city. By capturing the real affordability of a given location, the index shows that cheap land on the outskirts of cities may not be as cheap as it seems. This has tremendous implications for many of the developing cities where we work. While planners must thrive to make public transport more affordable, they must ensure that demand for transport increases in a way that is served by public transport. And it would be good if such a planning tool could help us plan the affordability of transport in developing country cities to make them more socially inclusive while energy efficient.
Topics
Transport
Urban Development
Poverty
Digital Development
Governance
Countries
Brazil
India
Mexico
Philippines
United States In the US, the public transport is expensive. For example, a trip for someone close to a metro that is not walkable, uses a car, pay for the parking charge and pay for up and down peak hour fares... and can easily add upto 15-20 USD a day.. The bus services are not that frequent.. And, the house rentals for houses/apartments close to metro seems to be more expensive . So not sure, whether the overall costs would be any different.. At least in one of the developoing country that I come from, the train fare does not change during peak hours, there are monthly season tickets that comes with 10-15 trip fares making it that much more affordable...