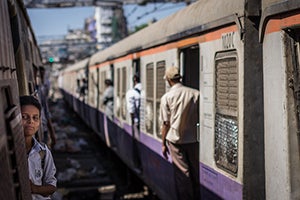 Mumbai and São Paulo are two mega metropolitan regions (MMR and SPMR) in the BRICs with about 20 million inhabitants each. They are the economic engines of their respective countries and act as a magnet for rural, low-income populations seeking employment opportunities, growing at a rate that puts tremendous pressure on their transport infrastructure and other public utilities.

As population and income rise, car and motorcycle ownership quickly increased in both megacities while mass transit is not developing fast enough, with serious consequences on traffic congestion, accidents and pollution. São Paulo has 150km+ traffic queues daily and losses of productivity, wasted fuel, health impacts and accidents estimated at around 2% of Brazil’s GDP in 2013, with three fatal deaths daily in motorcycle accidents alone. Mumbai, in addition to all-day road traffic jams, have an astounding six deaths daily from riders hanging and falling from packed trains which circulate with open doors to avoid reducing carrying capacity. The city comes to a standstill when the rail right-of-way is flooded by heavy monsoon rains.

Access to jobs and basic services in both mega-cities is extremely difficult – particularly for the poor, who often live far from major employment centers. The two cities need to act quickly and take drastic measures to improve mobility and access... But this is easier said than done: expanding the transport infrastructure in these megacities requires careful planning, massive investment,  and may also involve relocating large numbers of people and businesses.

Both MMR and SPMR are blessed with extensive suburban railway networks that were built originally for freight and intercity passengers and are now major commuter networks used by millions of passengers every day. Some of those suburban lines are being upgraded and aim at providing a level of service comparable to a metro. Conversion of suburban lines makes sense if it is coupled with urban renewal around key stations through adequate transit oriented development (TOD) plans, but needs urgently to be complemented by many more kilometers of exclusive mass transit corridors such as metros (underground and elevated) and BRT (bus rapid transit) as in Santiago de Chile. This is not happening fast enough in São Paulo and Mumbai.

So, why were the three levels of government (municipal, state and federal) so slow in coordinating mass transit programs to respond to the growth of their megacities? Why Mumbai unlike Delhi which started in 2002 and has 194 km of metro, waited until now to start operations on its first metro and monorail lines when population and congestion grew at such a relentless rate? Why São Paulo has only 70 kilometers of subway while other BRIC megacities like Shanghai, opened in 1993 has 538 km and Beijing in 1971 has 465 km?

São Paulo, Mumbai and other megacities of the BRICs facing similar mobility challenges must focus on three key aspects:


Transforming rapidly mass transit in megacities like Mumbai or São Paulo requires real political commitment at all levels and civil society support to mitigate risks. But the potential rewards are high. National and local governments as well as civil society must understand that low mobility slows economic growth and increases social inequality, and must be addressed through concerted efforts by all relevant stakeholders. The Development Banks certainly have a role to play in this, and should consider launching a Rapid Transformation Mass Transit program for the megacities of borrowing countries.  Improving urban mobility is a key stepping stone to achieving the Bank’s shared prosperity objectives in megacities, and will bring much needed relief to the weary commuters of São Paulo and Mumbai.