​Marine Protected Areas will be a topic for discussion at the IUCN World Parks Congress, which is opening today in Sydney.  And it should be: MPAs—which are marine spaces that restrict human activity and manage resources to achieve long-term conservation of nature—are one of the many tools for better ocean management.  This is one of the reasons the World Bank Group supports efforts to establish MPAs in countries including Indonesia and Brazil.

Every MPA is not created the same; some allow fishing and some do not, some are small and some are large, some are connected and some stand alone. When they are well planned and well executed, MPAs can help feed communities, protect jobs and boost biodiversity in the ocean. Here are the top five reasons why MPAs can be GREAT!

The benefits of an MPA extend far beyond the boundaries of protection. When well planned, MPAs act as the home base for migratory species. These species use the protected area to reproduce, feed or congregate. But they do not stick around for long. This is called the “spill over effect” and it is hugely beneficial to local fishing communities. Even if fishing is restricted inside the MPA, just outside the border the fish are more numerous and far larger. For example, in Indonesia, community income increased 21 percent in 258 villages near a network of six protected areas.
Protecting Indonesia's Coral Reefs

Often, conserving biodiversity can be far more profitable than exploiting it. In Cabo Pulmo, Mexico, the community chose to forego fishing on their 27.5 mi2 reef and set up an extractive reserve. It was a bold choice for the small fishing community but it has paid off spectacularly. After a decade of protection, Cabo Pulmo reefs have seen a four fold increase in biomass and every group of large predatory fish has returned. And with the fish, came the tourism industry. Now, instead of fishing a dwindling stock, the small community hosts a $500k a year tourism industry that is more lucrative than fishing ever was.
World Heritage Biosphere Reserve
3. Coastal Parks Protect Coastal Towns

For coastal communities the value of a mangrove or a coral reef far exceeds the value of the fish that live there or the wood that comprises it. These ecosystems protect coastal homes against storms and floods, the kind that will be far more disastrous as climate changes.  Coral reefs can reduce wave energy by an average of 97 percent and mangroves secure the coastline so that rising sea levels do not reach coastal homes. In Guinea Bissau, a network of protected areas was established to cover 15 percent of the coastline, with focus on the crucial mangroves. By supplying alternate livelihoods, mangrove deforestation is in decline and the community profits from the short- and long-term benefits. 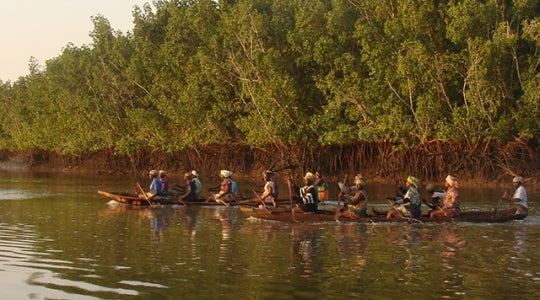 The ocean is vast and without physical boundaries. It can be tough for communities or countries to protect limited natural resources for the small-scale fisheries and local communities that rely on them. MPAs can provide that security, allowing communities to "use resources without using them up." This is the goal of the Barbuda Blue Halo Initiative, a partnership between the local government and the Waitt Institute for sustainable, profitable, and enjoyable use of ocean resources. The science-based, community driven new ocean laws create a network of sanctuary zones to ensure that Barbudan fishers will be able to fish in their waters for generations to come.
Barbuda Blue Halo Initiative - Using the Ocean Without Using it Up
5. Protect Biodiversity

Biodiversity is the foundation on which our entire blue economy is based. Without the millions of different species in the ocean, we would not be able to support our fishing and tourism or our many inventions, technologies and medicines that we derive from the ocean. MPAs provide a landscape-approach that encourages the recovery of the interconnected biodiverse web of marine life rather than focusing on distinct species individually. Through this, MPAs can protect the foundation of a global network of goods and services you use every day. 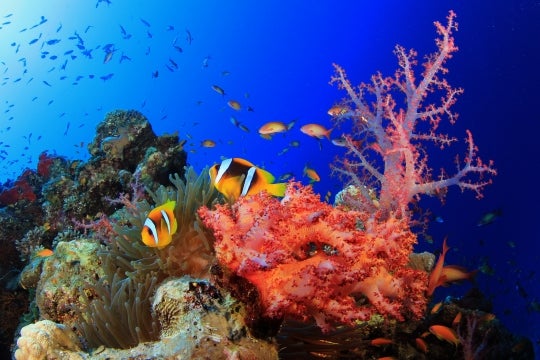