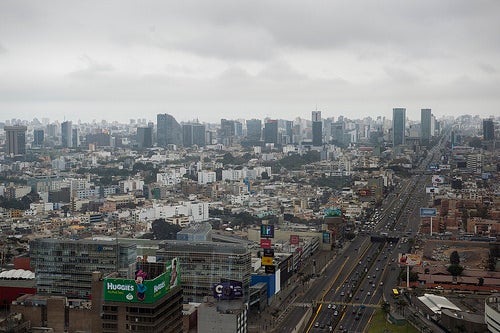 By the early 2000s, Peru faced serious environmental problems. Air pollution in urban areas was so severe that it caused thousands of premature deaths every year. In fact, air quality in Lima was worse than in other large Latin American cities, such as Mexico City or Sao Paulo. Other environmental challenges that damaged people’s health included air pollution inside homes caused by the use of wood for cooking; insufficient access to clean water, sanitation, and hygiene; and exposure to lead, a highly toxic chemical. Together, these environmental problems caused 12 million cases of illnesses annually, dramatically affecting young children, the elderly, and poor people who couldn’t afford medical care. The World Bank estimated that these negative impacts had an economic cost equivalent to 2.8% of Peru’s Gross Domestic Product (GDP) in 2003.

One of the main reasons the Peruvian government wasn’t able to respond promptly to these serious environmental problems was the country didn’t have governmental organizations with a clear responsibility for environmental protection. Another important reason was the absence of a system of reliable environmental information to support the government’s decision-making process. For example, there was little awareness about the seriousness of air pollution, largely because most cities didn’t have a functional air quality monitoring network. Even in the few cities that did, the information was not widely disseminated. In the absence of such information, it was difficult to identify which environmental problems were most severe, and to develop actions and assign resources to solve them. In addition, lack of information limited the opportunities for the public—including the poor families and other vulnerable groups that suffered the most from pollution —to discuss their environmental concerns and agree on solutions with government officials.

The strengthening of Peru’s environmental laws and organizations, coupled with investments and dedicated campaigns, helped to achieve notable improvements in a number of environmental indicators. Outdoor air quality in Lima-Callao seems to have improved and the population exposed to harmful air pollution levels fell by 15% between 2001-2003 and 2010-2012. Similarly, the risks from inadequate access to clean water, sanitation and hygiene have declined over time.

Does this mean that Peru has solved its environmental problems? Unfortunately, not. Although air pollution levels are lower, millions of Peruvians continue to face severe health risks caused by the air they breathe. And there are still many other important areas of environmental concern.
It is therefore encouraging to see the government turning its attention to strengthening the National Environmental Information System (SINIA) with World Bank support. The Bank will finance the construction and operation of a state-of-the-art lab that will be used to analyze samples collected by the environmental enforcement authority, as well as to provide quality control services to other public and private labs. The Bank will also finance the establishment of 31 water quality monitoring networks and air quality monitoring networks in six cities. In addition, the project will support SINIA in improving its databases and in developing platforms through which the public can access up-to-date, reliable information, and that will also help the Ministry of Environment in solving cases of environmental violations.

An old adage holds that “you can’t manage what you don’t measure”. A stronger SINIA will help Peruvian society, government, and other stakeholders measure environmental quality. With better information and unrelenting commitment to environmental health, Peru is poised to bring about environmental improvements for the benefit of disadvantaged groups and society at large.