An Emotional Start to the 10th UN Forum on Forests 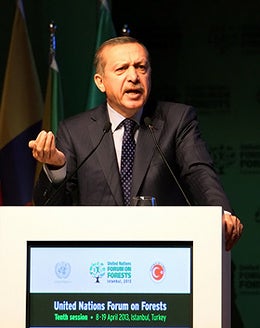 United Nations events, usually crowded with diplomats and technocrats, aren’t normally those which raise a lot of emotion – though there have been exceptions. I remember in particular the admonition from a delegate of Papua New Guinea to the UNFCCC COP a couple of years ago that if the United States wasn’t going to lead on tackling climate change, then it should at least get out of the way. Or last year in Doha, when the delegate from the Philippines complained that "… as we vacillate and procrastinate here, the death toll is rising" from a recent typhoon in his country.

Yesterday, the 10th Session of the UN Forum on Forests opened with an especially heartfelt plea from Turkey’s prime minister that departed from the usual platitudes of global leaders when it comes to the environment. Recep Tayyip Erdoğan kicked off the Forum saying:

“If the dress we wear is built on the hopes of a five-year old child in Bangladesh, if the gasoline we put in our cars is mixed with the blood of the innocent in Libya, if a chocolate we hand down to our children poisoned rivers in Africa, if a coat we are wearing has caused the extinction of a species, if the furniture in our homes plundered the rain forests, then we need to be disturbed by this cycle, by this kind of globalization, by this kind of trade. We need to question this to the deepest level and resolve it ….

"The global threats which humanity faces eliminate the luxury of saying, ‘What do I care?’” Erdoğan said. “We are not only creatures of bodies, heads and brains. We carry hearts, we carry souls, and we carry conscience.”

Erdoğan’s tough words challenged the Forum to come to terms with its own future, and its mandate to promote “the management, conservation and sustainable development of all types of forests and to strengthen long-term political commitment to this end.” The UNFF was established by the Economic and Social Council of the United Nations (ECOSOC) in 2002 to support measures to

The Forum is one of the few international bodies not supported by a Convention, but instead is backed by the so-called "Forest Instrument," signed by member states but not legally binding – and without any financing mechanism. Nonetheless, UNFF remains an important forum for developing a common agenda towards the conservation and management of forests globally, with a mandate until 2015 when a new structure is to be put in place.

In the absence of a financing modality, much of the discussion at the Forum will be aimed at figuring out how to make progress. Thinking in the Forum has evolved increasingly to recognize the role of private financing in shaping forest landscapes – though not always for the better. The challenge is to channel some of the $15 billion reportedly invested each year by the private sector in tropical forests – nine times the combined investments of national and international agencies - toward environmentally, socially and economically sustainable forest management practices. But also to steer massive developments across commodities and sectors (mining, transport, agriculture) in forest-friendly ways.

So one of the challenges for the Forum will be to explore how to make private interests deliver public goods – rather than to accept the type of degradation Erdoğan emotionally referred to. More on the Forum next week. ...