In our first-ever blog contest, we invited bloggers to watch webcasts of events at the World Bank Group-IMF Spring Meetings and write about them. More than two dozen bloggers entered the contest, most from developing countries around the world.

They chose subjects as diverse as: Our grand prize winner, Kalyan Panja, also blogged about the climate-smart agriculture event, and wrapped in a wealth of facts about global food (in)security that resonated well with the flagship event on the Future of Food.

One of the contest judges, Kevin Nellies, said he picked Panja’s blog because it was “solution-oriented, pointing to technology and alternative diets as potential solutions, and the author is updated on developments in the field.” Nellies is head of online and multimedia communications for the International Energy Agency.

Panja’s blog post, “Food for thought,” is republished here, and he will also have the opportunity to interview a senior World Bank Group official in the coming months. Based in India, he is a photographer who blogs about a wide variety of subjects, from recipes to travel, on his Triptasy blog. 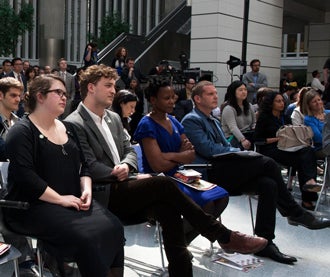 The other winner, Mehrunisa Qayyum, wrote about two events, “Creating Jobs and Improving Services: A New Social Contract in the Arab World” and “Trust, Voice, and Incentives: Learning from Local Successes in Service Delivery in the Middle East and North Africa.” She traced the idea of a social contract back beyond French philosopher Jean-Jacques Rousseau to 9th-century thinker Abu Nasir Al-Farabi and even farther to Hammurabi’s Code.

Nellies commented that Qayyum “manages to integrate both philosophy (Rousseau) and social media features (hashtags and tweets) in a way that’s complementing rather than distorting the main message.”

Qayyum’s post, “Rousseau isn’t the first, nor last, to negotiate a ‘social contract,’” is republished here. She is a Washington-based consultant on Middle Eastern affairs who blogs at PITAPOLICY.

In addition to Nellies, the contest judges included Joshua Hatch, vice president of the Online News Association and senior editor, data and interactives at the Chronicle of Higher Education; and myself, Elizabeth Howton, global web editor at the World Bank.
Topics
Digital Development
Regions
The World Region
Series
Blog4Dev