In Bolivia, being female and Indigenous conveys multiple disadvantages

Florina Lopez spoke movingly about her experience of double discrimination, being both Indigenous and a woman, at the recent launch of the new World Bank Group report, Indigenous Latin America in the Twenty-First Century. Lopez belongs to the Panamanian Indigenous Guna people and has spent decades working for Indigenous movements, starting at the community level and now coordinating the regional Network of Indigenous Women's Biodiversity.

She is one of many Indigenous women in Latin America who have dedicated their lives to creating more inclusive societies. While it is important to acknowledge that not all Indigenous groups and not all women have the same experiences, the concept of intersecting identities helps explain the concept of  "additive" or "multiplied disadvantage" (or advantage). Individuals are part of multiple social structures and roles simultaneously, and these structures interact and influence experiences, relations, and outcomes.

The intersection of gender and ethnicity, for example, can deepen the gaps in some development outcomes. Indigenous Latin America in the Twenty-first Century explains that, while Indigenous Peoples' access to services has improved significantly, services are generally not culturally adapted—so the groups they are meant to benefit do not take full advantage of them. In Bolivia, where more than 40 percent of people identify themselves as Indigenous or Afro-descendants, according to the 2012 Population and Housing Census, indigenous women face a higher risk of being excluded. Further, according to a 2014 Perception Survey on Women’s Exclusion and Discrimination, all women feel discriminated against in different aspects of their lives, with Indigenous women particularly affected. 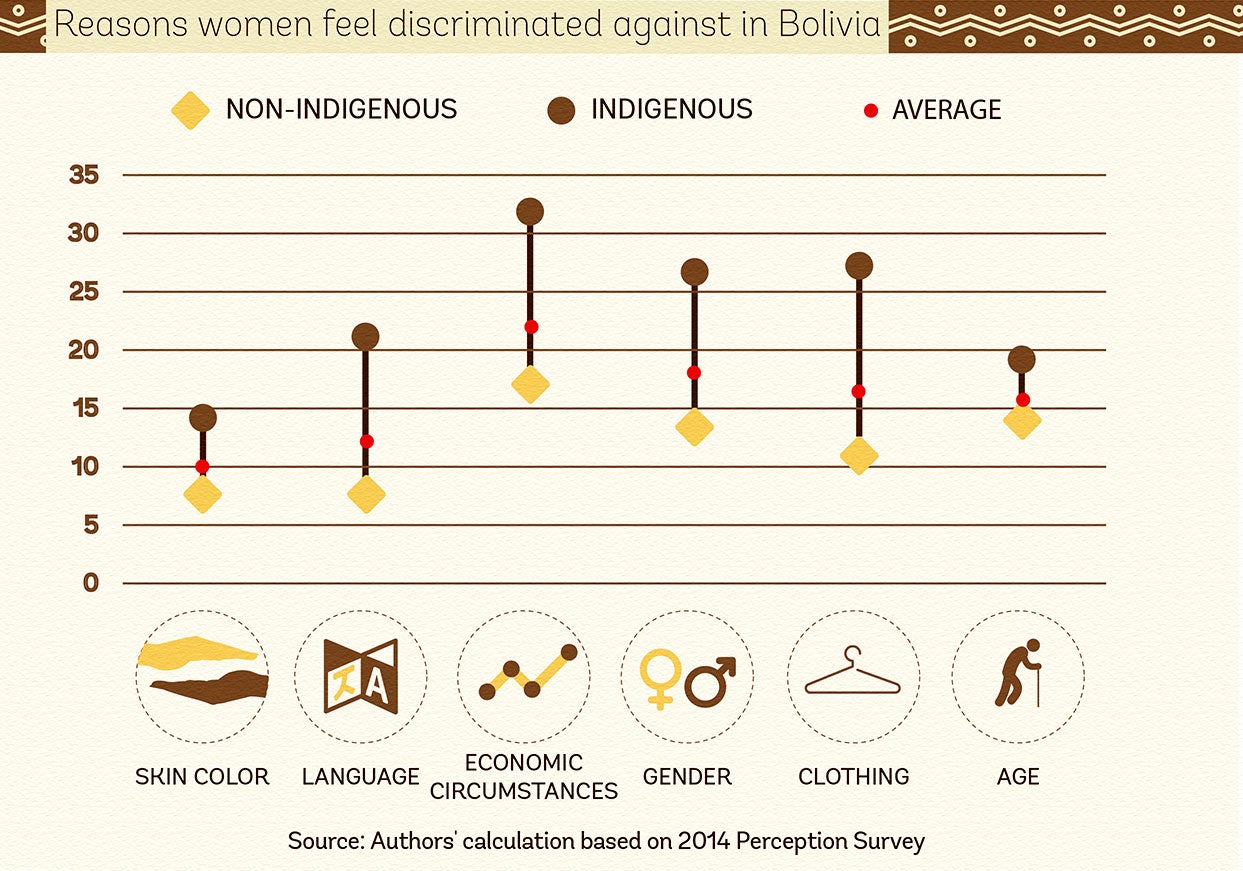 How does intersectionality and discrimination play out in education and health?

Many factors prevent girls from attaining higher levels of schooling in Bolivia, including domestic care work, early pregnancy, and the need for income.  But girls who persist in secondary and higher education face other barriers:  one in five female students aged 15 to 24 report having experienced discrimination in academic environments: 25 percent of Indigenous women versus 18 percent of non-Indigenous women.

Investments in education and health shape the ability of men and women to reach their full potential, allowing them to take advantage of economic opportunities and lead productive lives. Limited access to these kinds of investments not only adversely affects an individual’s opportunities, but may have significant costs for entire communities and economies.

Inclusion must be front and center on the development agenda. More and better information—both qualitative and quantitative—is needed to highlight the persistent issue of overlapping disadvantages. This will allow us, ultimately, to do much more to expand every person’s capacity to participate fully and equally and achieve his or her potential. As Florina Lopez said earlier this month, "Without the effective participation of Indigenous women in society, it will be difficult to eradicate the poverty and extreme poverty that we live in."